WTF: How Is Midget Wrestling Still a Thing? 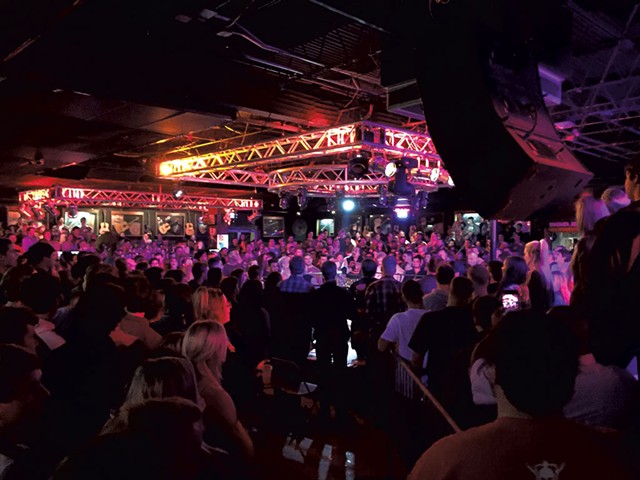 Anyone remotely familiar with the world of professional wrestling knows it's fake. Cartoonish characters clad in garish spandex outfits slam and smack their way through scripted, melodramatic story lines and carefully choreographed matches. The "sport" lands closer to full-tilt performance art. Call it athletic competition if you want, but it's nothing more than a spectacle.

On Saturday, February 3, Burlington's Social Club & Lounge brings professional wrestling to the Champlain Valley, but with a twist that might make your head explode. The event is called Midgets With Attitude, a product of the Chicago-based company Midget Wrestling Entertainment. The traveling wrestling show, which has made stops from Maine to Texas but never before in Vermont, features a cast consisting entirely of little people — that is, persons with dwarfism. Otherwise, it's exactly what you might see on "WWE SmackDown."

The production raises many questions, not the least of which is: WTF? Additionally, what year is this? Wasn't this kind of "entertainment" showcased in 19th-century circuses? Doesn't it objectify and belittle a person's medical or genetic condition? How is it not horribly exploitative and degrading to short-statured individuals? And what about the M-word? Isn't it outdated and considered offensive?

The answers to those questions vary depending on whom you ask.

The folks we consulted in the little-person community seemed to be divided on both the activity and the word. For instance, Little People of America, one of the largest and most visible advocacy groups for that community, took umbrage both at the word "midget" and at the "wrestling."

In an email to Seven Days, LPA advocacy director Michelle Kraus wrote, "Part of our charge is taking a stand about language that is considered by most in the community as being offensive and dehumanizing. We take an educational posture about the derivation of the word 'midget' being a reference to a small insect."

Etymologically speaking, that's true. The word "midge" or "midget" previously referred to any number of diminutive pests before its reappropriation in the mid-19th century. Likening short-statured people to gnats and mosquitos is indeed insulting.

"We work toward breaking stereotypes of little people perpetuated by midget wrestling — that a little person is a spectacle for entertainment," Kraus continued.

However, a similar, nascent organization, Little People of the World, takes a different stance.

"['Midget'] is a word used in entertainment," said LPW founder, president and CEO David Breshears in a phone interview. "Those that use the word with wrestling or any other entertainment — it's their way of making money for their family, and it's not my right nor any other little person's right to judge them for that."

Tommy Dulanski, who performs with MWA under the name Tommy Gun, echoed Breshears' sentiment in a phone interview.

"In the entertainment industry, no, that word is not offensive," he said.

But Dulanski didn't deny that the word can be hurtful in other contexts. "There are some little people who look at that word like a black person [would at] the N-word," he said. "When I was a kid, when they called me ['midget'], those were fightin' words. But now I've realized you just have to educate people," he continued. "The proper term is actually dwarf. And a lot of people think that's offensive. It's actually the scientific term."

Dulanski has performed with MWA as a hype man and referee for nearly a decade. Before his current gig, he said, he bounced around many workplaces: a car dealership, a food market, Popeyes Louisiana Kitchen, an amusement park, construction sites. He's held his MWA job longer than any other.

"A lot of times, there are things [a full-statured person] can do that I can't," Dulanski conceded. "To have this job is a blessing."

The LPA acknowledges this point of view but aims for a more equitable playing field, wrote Kraus.

"We are not disputing people's choice in careers, but we strive for employment opportunities for little people to be a choice as equal, varied, safe and satisfying as they are for average-height individuals," she said.

Potential offensiveness isn't the only factor to cause a dispute over the name Midgets With Attitude. Breshears claimed the group visiting Burlington isn't the first to use it and is doing so without permission. According to Breshears, the true owner of the name is Brandon Wilson, who coincidentally happens to be the executive vice president and CFO of LPW.

Wilson confirmed Breshears' claim over the phone but noted that, legally speaking, no one currently owns the trademark; he said he's in the process of registering it. A search of the United States Patent and Trademark Office's database yielded no results for "midgets with attitude." A representative of MWA couldn't be reached for comment regarding the allegations.

Mike Couture, manager of Social Club & Lounge, expects a "good crowd" the night of the show.

"We like to be different at Social," he wrote in an email. "The feedback has been great for this event."

If you still have questions, Dulanski is here for you.

"We do this thing called the Q&A," he said. Before the action starts, the ref tells his audiences to ask "any question you want about little people," and he'll be as brutally honest as he can.

Correction, January 31, 2018: An earlier version of this story incorrectly described Mike Couture's position at Social Club & Lounge. He is the manager there.