WTF: How Do Big-Box Stores and Airports Deal With Nuisance Birds? 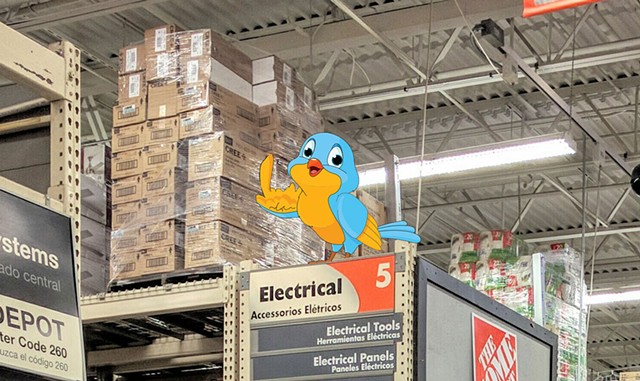 Walk into any big-box store, shopping mall or other sprawling expanse of indoor retail space this time of year, and you're likely to spot a few wild birds flitting about or roosting in the rafters. Winged creatures are especially common in the al fresco garden centers of Home Depot, Lowe's and Walmart — torn bags of birdseed are a likely draw — though wild birds are also known to take up residence in supermarkets and airport terminals.

For animal lovers, the presence of uninvited guests inside these cathedrals of consumption may feel like a mischievous act of defiance, as though the animal kingdom were flipping us humans the bird, as it were, saying, "You can wall it in but you can't keep us out!"

It may seem fairly innocuous to find sparrows chirping in the hardware department or starlings dive-bombing the home appliances. But there are legitimate health concerns when birds take up shop in a mall or supermarket. So, how do retailers rid themselves of these feathered friends?

Recently, a Seven Days staffer heard from a friend that the birds are dispatched with BB guns. Because this method sounded both inhumane and impractical, we reached out to several large retail chains, including Home Depot, Lowe's, Walmart, Shaw's and Price Chopper Supermarkets. Only Price Chopper answered our query.

"Birds, unfortunately, are a part of doing business when you're in retail," said Maureen Murphy, manager of consumer services and trends for Price Chopper, headquartered in Schenectady, N.Y. As she explained, the birds typically come in the same way the merchandise does — through the loading docks.

But when asked if Price Chopper and other supermarkets use BB guns to dispatch their guests, she seemed revolted by the suggestion.

"God, no! I know that we sure as heck don't ... We make sure they're taken care of humanely," Murphy said. "But when they're in our store, we have to be sure they're removed ... because, obviously, food safety is a big issue for us."

Indeed, having birds pecking at the salad bar or leaving droppings in the produce section is more than a fowl nuisance. It's also a health code violation. So, as soon as a store manager detects one, she explained, they contact a third-party vendor to catch and remove the bird from the store.

That task may fall to Cody Baciuska, a wildlife biologist and co-owner of Loomacres Wildlife Management in Warnerville, N.Y. His company, which has offices nationwide, controls wildlife for big-box retailers, airports, landfills and other large commercial structures.

According to Baciuska, who's been doing this work since 2003, his approach differs depending upon the source and location of the problem. Outdoor garden centers, he said, rarely need to address the presence of birds, because they typically come and go at will and do little damage.

In airport terminals, supermarkets and other places that sell food, however, Baciuska will set a variety of traps, such as nest box traps, which resemble birdhouses. Sometimes he'll use a baited cage with a funnel at one end, into which the birds can enter but not escape. If those methods don't work, Baciuska said, he'll set up a mist net, which is like a volleyball net made of nylon or polyester mesh suspended between two poles.

When all else fails, he noted, store staff may go in after hours with a pellet gun and handle the problem old-school style. "But they won't talk about that too often. That's usually the last resort," Baciuska added.

Are traps and nets more humane? To an extent, he cautioned. "But those birds may already have a way in and out of the store. So once they're trapped, they're euthanized."

At least, that's the case for the most common species, such as house sparrows and European starlings. If it's a migratory bird or a raptor such as a Cooper's hawk or a kestrel, Baciuska will do his best to catch and release it.

Managing wildlife on airfields is a more serious matter, he continued. Airports' first priority is to control birds that may damage aircrafts or even force an emergency landing. Loomacres, which works with airports throughout the region, including Plattsburgh International Airport and Rutland Southern Vermont Regional Airport, typically gets called to deal with hawks, Canada geese and osprey, as well as large mammals such as deer and coyotes.

In those cases, Baciuska will use various harassment tactics, such as specially designed pyrotechnics that are shot out of a starter pistol and make screaming sounds, or even a paintball gun.

Red-tailed hawks will often set up near airfields because they offer an abundant food supply of small rodents. Because these predators are territorial, if there's not a lot of food, a mating pair may defend an entire airfield from other predators, he said. However, as the food source increases, more hawks may move in, increasing the odds that a bird will strike an aircraft.

"The long-term solution is altering the habitat so that the birds don't come through," he explained. This may involve cutting the grass shorter and applying a rodenticide.

"On the other hand, if we cut the grass real short, Canada geese like short grass, so that can attract them," he added.

What about plastic owls, black plastic bags and noise machines that mimic the sound of birds in distress? Baciuska said their effectiveness is limited.

"They may work for the first week or so," he explained, "but after that, the birds realize that they're hungry and come back."

Perhaps it's time to rethink the expression "bird brain."

The original print version of this article was headlined "How Do Big-Box Stores and Airports Deal With Nuisance Birds?"