WTF: How Can Someone Sell Rights Over a River in Montpelier? | WTF | Seven Days | Vermont's Independent Voice

WTF: How Can Someone Sell Rights Over a River in Montpelier? 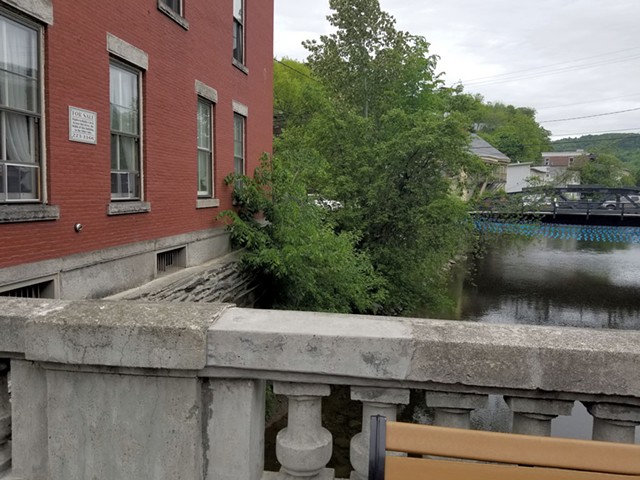 As "for sale" signs go, this one is bizarre but dead serious. If you stand on the north side of the Rialto Bridge, on State Street in downtown Montpelier, the advertisement is visible on the red brick building adjacent to the North Branch of the Winooski River. It reads: "Rights to build a deck across this river, the width of this building, to the other side."

WTF? Can a private citizen actually own the rights to the airspace above a public waterway? And if so, how would one legally secure those rights?

Many longtime Montpelier residents wouldn't even need to call the phone number listed on the sign to know who posted it: landlord and real estate magnate Jeff Jacobs, founder of Montpelier Property Management. At one time, Jacobs was — and perhaps still is — one of the largest private landowners in the capital city, holding title to more than a dozen historic properties in downtown alone, including the two that flank the North Branch at State Street.

Jacobs was a controversial figure in Montpelier's real estate community, before he retired several years ago and moved to Florida. In 1996, he became embroiled in a bitter legal battle with the city after he filed a permit application to put a McDonald's restaurant in his building at 43-45 State Street, which is now home to Capitol Grounds Café.

When the city rejected Jacobs' application due to concerns about traffic and insufficient parking — the proposal also included plans to install a three-story fryer vent on the exterior of the historic building — he appealed to the Vermont Supreme Court and filed an $8 million lawsuit against the city. Neither the appeal nor the lawsuit was successful, and Montpelier retains its distinction as the only state capital in the country without a Mickey D. 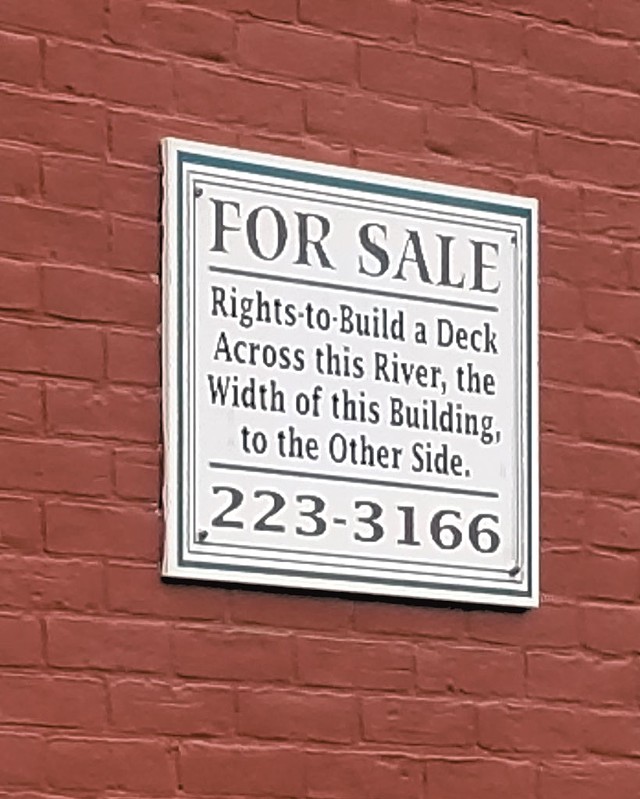 Whether Jacobs actually owns that airspace, and thus could sell or lease it to an interested party, is still an unresolved legal question. According to a story in the Barre-Montpelier Times Argus, in May 2006, after Jacobs twice applied to build a 3,700-square-foot deck across the river, he offered to sell or lease those development rights to the city itself for $495,000. The city council ultimately rejected his offer, and city manager Bill Fraser expressed doubts about the viability of Jacobs' ownership claim.

Montpelier city attorney Paul Giuliani explained the claim's origins in a 2011 interview with Seven Days. According to Giuliani, Jacobs and his lawyer had researched the title on the old Capital Savings Bank and Trust Company building, at the corner of State and Elm streets, and concluded that it included an appurtenance, or incidental legal right, to build a patio, deck or walkway over the river, as part of the building that already extended over the water.

"It was kind of an intriguing thought at the time," Giuliani noted in 2011, "but it never went anywhere, and nothing ever came of it."

Indeed, though Jacobs' idea may seem far-fetched, it's not entirely without precedent. Many other cities in the United States, including Chicago, Milwaukee, Minneapolis, Pittsburgh and Savannah, Ga., have invested in similar riverfront developments. Notably, San Antonio created its now-famous River Walk, or Paseo del Rio. The network of pedestrian walkways, restaurants, bars, shops and art installations, all below street level, winds along the banks of the San Antonio River. According to a 2014 study by the City of San Antonio, that project attracts more than 9 million tourists annually and generates more than $3 billion in economic activity.

It's unknown what Jacobs envisioned for "his" airspace — or whether those rights are still for sale. Repeated phone calls to and messages left for his son, Jesse, who now runs Montpelier Property Management, went unanswered as of press time.

However, Michael Miller, planning director for the City of Montpelier, suggested that in light of recent flooding events, especially Tropical Storm Irene in 2011, he's skeptical that a developer could secure all the permits needed to build anything in a state-designated floodway. As Miller pointed out, any such structure would need to be cantilevered off adjacent buildings and stand at least two feet higher than the base flood elevation, putting it at least as high as State Street itself. In the days after Irene, floodwaters lapped at the brim of the Rialto Bridge, which had previously survived the Great Flood of 1927.

Depending upon the scope of the project, Miller said, a developer might also need to secure permits from the Vermont Department of Environmental Conservation and the U.S. Army Corps of Engineers.

"There's a lot of legal gray area. We're not sure what we'd do," he concluded. "We'd probably wait for an application to come in and then let the lawyers pick through it."

No one has approached the city with a proposal for that airspace for more than a decade. So the sign remains.

"It's kind of like the Brooklyn Bridge," Miller added. "How many times can you sell it?"

The original print version of this article was headlined "Is Airspace Above the Winooski River in Montpelier Really for Sale?"