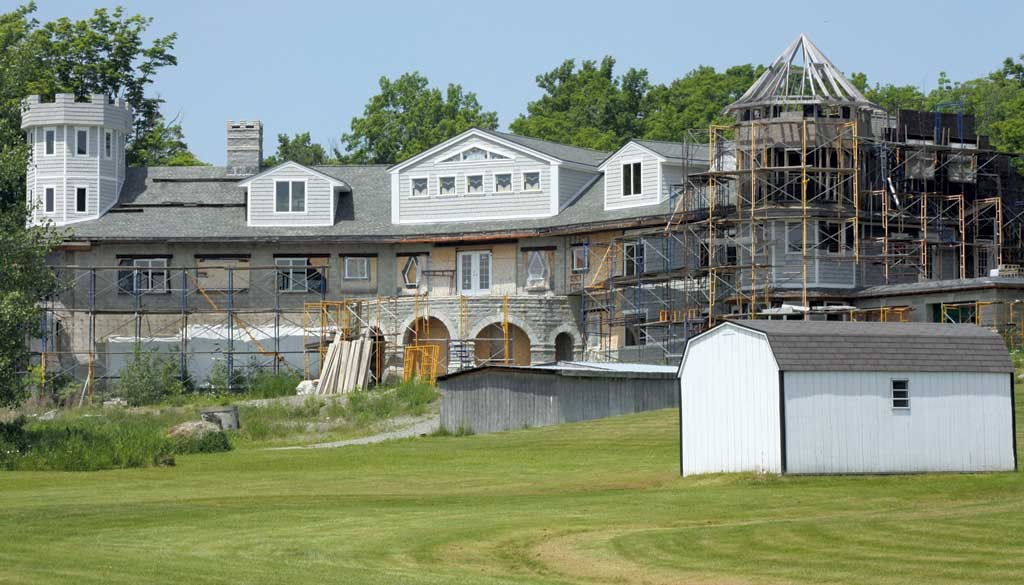 Nestled in the hills of Georgia, Vt., along a rolling country road sits a mansion of medieval proportions. It requires no stretch of the imagination to call it a castle, albeit a modern one, with impressive views of Georgia Mountain's wind turbines to the east. Longtime Franklin County residents say the unfinished edifice has been in a state of suspended animation for years, showing few signs of life except for the occasional mowing of its expansive front lawn.

A curious visitor to the property, at 2437 Oakland Station Road, is greeted by two stone pillars, a winged gargoyle and a single name etched in stone: "BAYNE." Just beyond an artificial pond and a doublewide trailer at street level, a winding dirt road — barred by a chain and "No Trespassing" sign — leads to a sprawling structure that, architecturally speaking, attempts to blend Gothic stone archways into a colonial McMansion. Neo-eclectic indeed!

The castle is bookended by two towers: one beige and rook-like rising from its east wing and another, framed out but incomplete, in the west wing. Using a telephoto lens, one can make out a few stained-glass windows on the top floor, though most of the window openings are covered with plywood. Much of the castle is also shirted in scaffolding, as though a marauding army once laid siege to it but has since decamped — an impression only reinforced by the burnt-out and abandoned husk of a neighboring farmhouse.

Was this to be a new Renaissance fairgrounds in Vermont's northwest kingdom? A summer camp for Dungeons & Dragons enthusiasts? A set for next year's 40th-anniversary remake of Monty Python and the Holy Grail? WTF?

We wish we could say for sure. Though no sign is outside, Georgia's broken-down palace is on the market, through RE/MAX Destinations, at the asking price of just $925,000 — down from $1.3 million in January. We learned from its real estate listing — MLS No. 4255788, for you house-hunting enthusiasts — that the castle was built on more than 10 acres and boasts nearly 19,000 square feet of living space. As a point of reference, the median square footage of a typical American house reached an all-time high in 2012 at 2,306 square feet, according to the U.S. Census.

Simply put, the place is a behemoth — and an empty one. The realtor notes that it features "real stone walls, turrets and towers, stained glass and top-notch materials," and is "built like a fortress, framed with stone blocks, concrete and steel I-beams." The "castle awaits your designs and finishing touches. Mostly open inside, so [the] possibilities are endless."

Presumably, future options could include a moat, drawbridge and fire-breathing dragon to slay.

Georgia town records indicate that the castle belongs to Tina and James Bayne, who reportedly live on the property but not within the castle walls. Jim Bayne is a pyrotechnics expert who also owns and operates Celebration Fireworks of Vermont in Milton. A clerk in Georgia's municipal offices describes him as "a really nice guy" with "arms like tree trunks" who puts on the town's annual Fourth of July fireworks display.

Town property records also indicate that the house has been under construction since at least 2000, with design sketches from the early aughts showing three towers, 12 rooms, two full bathrooms, one half bath, one kitchen and six fireplaces. Gotta respect a man who digs fire.

Bayne's real estate agent, Chet Baranski, notes that Bayne is a master stonecutter who built the house himself.

"It's like a real castle. It even has its own cemetery," Baranski says. "You can't move that, so whoever buys the property gets the cemetery with it."

However, Baranski isn't comfortable saying anything about the castle's origins or why it was never completed. He notes that the house has been on the market for about 10 months and has elicited "sporadic" interest from a few serious buyers (as opposed to nosy neighbors). What might it be used for? Baranski suggests the castle could easily be repurposed as condos, or maybe an inn. (A Bed & Bastion, perhaps?) As he puts it, "It's very unique, that's for sure."

One obvious challenge, aside from finding a buyer with a cool million to drop on an unfinished feudal estate in rural Franklin County, is the difficulty of securing financing for a house that's little more than a shell — even if that shell is thick enough to withstand the onslaught of trebuchets, mangonels and battering rams.

Jim Bayne himself was nice enough when Seven Days reached him by phone last week. We had plenty of questions: What dreams of a citadel on the hill compelled him to erect this stone fortress? A desire to demonstrate his masonic machismo? The primeval calling of Scottish roots?

And why was it never finished? Incomplete as it may be, Bayne Castle is in good company with other large, unfinished stone buildings, including Germany's Neuschwanstein Castle and London's Westminster Cathedral and Palace of Whitehall. While it may look big in Georgia, it's a mere walk-in closet compared with billionaire David Siegel's 90,000-square-foot garish monstrosity in Windermere, Fla., known as America's largest single-family house and made famous in the 2012 documentary The Queen of Versailles.

Alas, Bayne politely declined to comment. After all, a man's home is his castle.