WTF: Does Vermont have a first lady or not? | WTF | Seven Days | Vermont's Independent Voice

WTF: Does Vermont have a first lady or not? 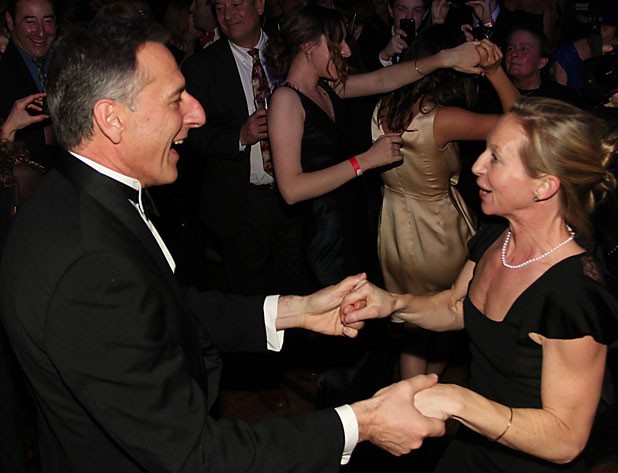 Before kicking off his campaign for governor, Peter Shumlin revealed to the local media that he had separated from his wife of two decades, Deborah, for a second time. While stressing that the two remained “great friends,” Shumlin told the press they had decided it was best to live apart. In doing so, he noted, “Half of Vermonters who enter into marriage go through this.”

So it might have puzzled some to see Deborah Shumlin sharing the stage with the governor-elect at the Burlington Hilton the day after election night when Shumlin declared victory. And sitting in the front row for his inauguration at the Statehouse last month. And twirling with the new governor on the dance floor at the inaugural ball.

The world wide web, that great oracle, only adds to the murkiness. Wikipedia lists Deborah Shumlin as Vermont’s first lady, while Shumlin’s online official state biography omits any mention of marital status, simply noting he is the father of two daughters: Olivia, 20, and Rebecca, 19.

If you Google “Deborah Shumlin,” the first hit is a Gawker article from February 2010 detailing how Rebecca Shumlin and a friend tried to gain access to a New York City fashion show by telling organizers the friend was a freelance stylist working with the “future first lady” of Vermont.

Given all that, a curious person may wonder, WTF? Does Vermont have a first lady or not?

The official answer is “no.” Gov. Shumlin tells Seven Days that he and Deborah remain separated and maintain separate residences in Putney (he also keeps an apartment in Montpelier). Still claiming the two are “great friends,” the governor won’t speculate on what the future may hold — including the possibility of divorce.

“When you hired me, you hired a first man and a first lady,” quips Shumlin, who was introduced solo when he walked down the Statehouse aisle on inauguration day. “I’m doing both jobs. I can play both roles, I hope. I’ll make a good first lady. I promise.”

Luckily for Shumlin, that shouldn’t be too hard — wardrobe aside. In Vermont, first ladies (and one first gentleman) historically haven’t had much of a role, says state archivist Greg Sanford. With no governor’s mansion, no staff and few required duties, most first mates have pretty much carried on with their normal lives.

Dorothy Douglas maintained her job as a dental hygienist during husband Jim’s eight years in office. Dr. Judith Steinberg Dean, Howard’s wife, rarely paused from her busy medical practice to join her husband when he was governor. An exception was Barbara Snelling, who parlayed two stints as first lady into a successful political career of her own, first as lieutenant governor and then as state senator.

By contrast, presidential first ladies have in recent decades become heavily scrutinized — and hugely popular — public figures, enjoying approval ratings their hubbies could only dream of while promoting such causes as literacy and healthy school lunches. Dr. (Mrs.) Dean, who enjoyed a great deal of privacy as Vermont’s first lady, got a taste of the spotlight — and the harsh media glare — during her husband’s 2004 presidential run. Doing damage control following “the scream,” the Deans went on ABC prime time for what turned out to be a slightly awkward interview with Diane Sawyer.

Deborah Shumlin probably won’t be joining the governor for many events in the future and won’t fill any of the typical first-spouse duties, says Susan Allen, special assistant to the governor. Allen says the couple maintain a “cordial” relationship, and that Deborah’s recent appearances were at milestone moments such as Peter’s inauguration.

So, is Shumlin Vermont’s first bachelor governor? Historical records don’t make it easy to say for sure, but there hasn’t been one in at least half a century. It’s unusual enough that the question stumped several of Vermont’s most knowledgeable history buffs.

“I wouldn’t know without going through secondary sources,” says Sanford.

Paul Carnahan, head librarian for the Vermont Historical Society, says the question would be hard to answer without an exhaustive search of records that, in some cases, would be hundreds of years old. Seven Days’ brief search through a century-old Vermont history book in the University of Vermont’s Bailey/Howe Library turned up a dozen governors whose biographies make no mention of marriage — but that doesn’t mean they weren’t hitched.

The history books do reveal spousal situations that had to be far more awkward than Shumlin’s. A year after his first wife died, Gov. Paul Dillingham (1865-67) married her younger sister. The first wife of Gov. Jonas Galusha (1809-13) was the sister of his lifelong political nemesis, Gov. Martin Chittenden (1813-15), making the rivals brothers-in-law.