WTF: Do Vermont Schools Call More Snow Days Than in the Past? 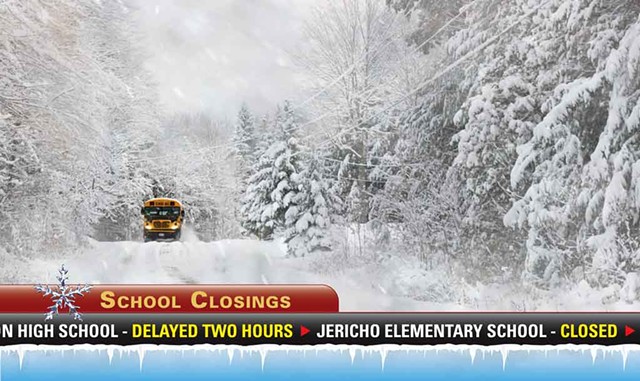 Nothing compares to a snow day off from school: the anticipation the night before as the flakes start to fly; the excitement when the phone rings at 5:30 a.m. with the robocall announcement; the unmitigated joy of walking outside for a day of snowball fights, snow fort building or schussing down the slopes.

And that's just how the teachers feel. Kids seem to enjoy snow days, too.

For households with a single parent or two working parents, however, school cancellations can translate into a mad scramble for daycare. The inconvenience may explain why one Seven Days reader wrote in recently to ask why Vermont schools seem to call more snow days now than they did 30 years ago.

Is climate change bringing more wintry weather? Are today's Vermonters more averse to the risk of putting kids on buses during snowstorms? Are school administrators more wary of parental complaints, school board blowback or even lawsuits if they make the wrong decision?

Extra snowfall can be ruled out as the culprit, according to Scott Whittier, a warning coordination meteorologist at the National Weather Service at Burlington International Airport. Whittier reported that Burlington's 30-year snowfall average from 1961 to 1990 was 80.6 inches, whereas the 30-year average from 1981 to 2010 was 81.2 inches. That trend is "basically flat."

How many times did schools actually close in the last 30 years? Although districts must report such data to the state each year, a spokesperson from the Vermont Agency of Education recommended asking individual school districts, because the state doesn't keep those historical data on file. (This reporter: "Are you sure? Did you check under your bed? How about in your backpack? I bet you left them at school again.")

With roughly 260 districts statewide, give or take those that were forced to merge under Vermont's school-consolidation law, contacting each one seemed impractical. Instead, Seven Days reached out to the Vermont Superintendents Association, which provided the names of some of the longest-serving superintendents in the state.

Though none had data going back three decades, their insights were educational. All were willing, if not thrilled, to discuss the two- to three-hour process of reading the meteorological tea leaves and deciding whether to cancel classes, which typically begins for them at 4 a.m.

Jeanne Collins, superintendent of Rutland Northeast Supervisory Union in Brandon, has been in education for 38 years, including nine as Burlington's superintendent and five in her current post. A district's topography is key, she explained. Because Rutland Northeast has miles of mountainous dirt roads, she might be more inclined to cancel school than might her counterpart in the Rutland City Public Schools.

When Collins oversaw Burlington schools, by contrast, about half of her students walked to school. A preponderance of paved roads also helped keep Burlington schools open while surrounding districts might have closed.

Does Collins ever get parental pushback on her decisions? You bet, she said. After she didn't cancel school during a snowstorm three weeks ago, "I got beat up pretty badly by parents who felt that it was unsafe and that I shouldn't have been putting kids out there on the buses ... I would agree that there's [now] more pressure from parents."

David Young has worked in education for 29 years, the last nine as superintendent for the South Burlington School District. He couldn't say with certainty that there are more snow days now than three decades ago, but he agreed it feels that way.

One reason for the closures, he suggested, is increased student reliance on school transportation, as well as more student drivers. Today, many of Young's 2,500 students ride buses or vans to school; some travel from as far away as Isle La Motte. Years ago, he said, even kindergartners routinely walked to and from school; safety concerns have put an end to that.

Young also noted the role of technology: Forecasting is far more accurate than it was years ago, and interdistrict communications are faster. Administrators and transportation coordinators in the Champlain Valley routinely commiserate on closure decisions via group email. "It's a nice communication chain that lets you know you're not alone," he said.

John Castle, superintendent of the North Country Supervisory Union in Newport, said he rarely lets other schools' closure decisions sway his own. Castle, who's been in education for 23 years, explained why half his school administrators make that decision for themselves: His district encompasses about 550 square miles.

"I've got 55 miles between Brighton and Lowell," he noted. "They are literally in different ecosystems."

Castle, who grew up in Holland, Vt., also suspects that school closures are more common today. He blamed "the Weather Channel effect," or the transformation of storm forecasting into entertainment. It's hard, he said, to combat the public perception that schools should close when TV meteorologists give a snowstorm a name. "How do you put children on the roads when it's 'Snowmageddon'?"

Castle theorized that risk perception has also changed, especially as more people move to Vermont from less wintry locales. "I don't want to paint a picture that I'm cavalier about student safety or transportation," he said. "But I believe a bus is going to be fine in six inches of snow. Some parents will freak out."

Other factors come into play when superintendents make snow-day decisions: what time the storm starts; how quickly road crews manage to sand and plow; whether wind, ice and freezing rain are in the mix; and even whether a district owns or leases its buses or contracts transportation with a private bus company.

"You learn all these nuances over time, and you do the best you can to make a decision based on the preponderance of evidence," Castle said. No matter what, someone is likely to disagree.

Yet another reason to look forward to spring.

The original print version of this article was headlined "Do Schools Call More Snow Days Now Than They Did Decades Ago?"