WTF, BTV? Answers to Your Questions About Local Oddities 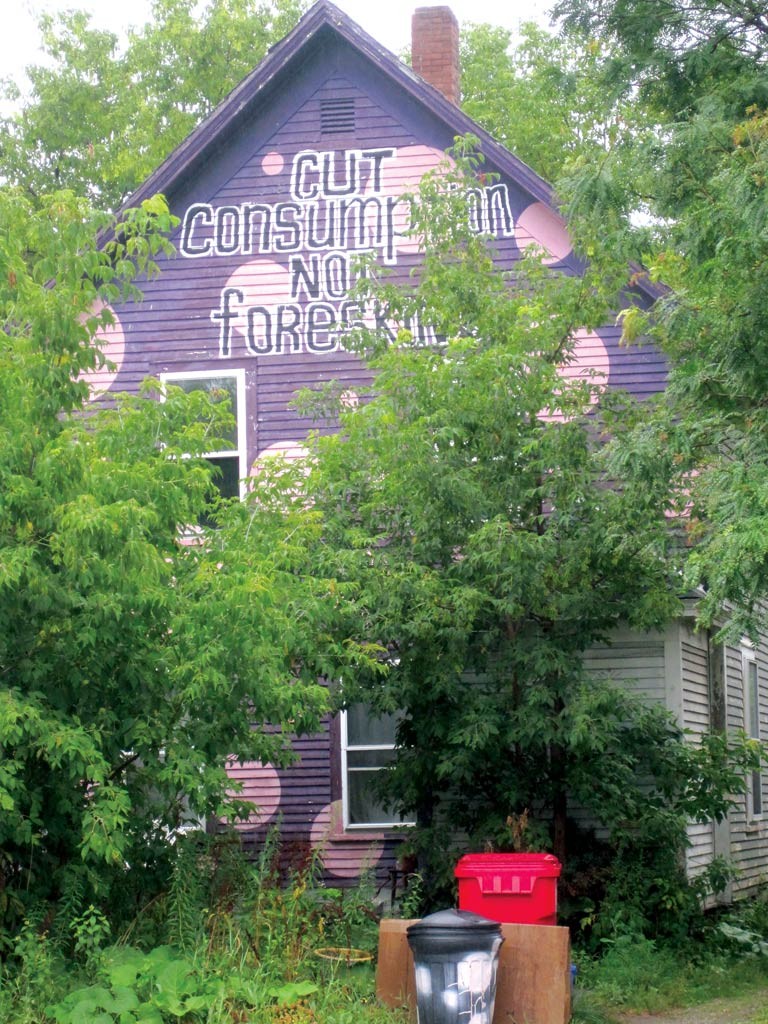 We know. Burlington, and most of Vermont, really, is kind of a weird place, especially for flatlanders — that's how we refer to folks, like many of you, who "ain't from around here." But there are certain people, places and things that make even the most dyed-in-the-wool Vermonter stop and say, "What the f...?"

To help make sense of it all, your friends at Seven Days provide answers to some of the most unusual questions about life in the Green Mountain State in a column we call "Whiskey Tango Foxtrot." We've excerpted some of our favorites for you here.

Check out the WTF column every other week in Seven Days. And if you've got a mystery to solve, let us know at wtf@sevendaysvt.com.

Q: Seriously, what's up with the "Cut consumption not foreskin" house? And why purple?

The house has long been painted purple with pink polka dots — the house's enigmatic owner, Jerri Kohl, did it to fulfill a childhood dream. But in 2009, Kohl, a software developer, environmentalist and maybe-nudist who moved to Vermont from the Bay Area, painted the slogan on his house as a two-pronged statement advocating sustainability and decrying circumcision, which he regards as genital mutilation.

"The message really is that simple," he told a Seven Days reporter, adding he wanted the message to be humorous but provocative. "There's nothing hidden."

Well, except maybe one thing.

Q: Did I see a teepee on I-89 when my 'rents brought me up from Connecticut?

Yes, there is a teepee in Richmond visible from I-89. And if you've been trekking up and down the state's main artery over the last few years, you might have noticed it recently got a paint job. Well, sort of.

The teepee belongs to Darin Pratt. And it's actually his second — the first, erected eight years ago, blew over in a storm on New Year's Eve 2012. The new one is much bigger and more colorful. Because it's built on a spit of land across the Winooski River from Pratt's home, he accesses it via zipline — there's a primitive road, too, that is not visible from the highway.

"I've taken that zipline with a 12-pack of beer in my teeth," he told a Seven Days reporter.

Inside, the teepee is decked out like a tiki lounge, complete with a bamboo bar, fake palm trees, a stereo and a fireplace.

Q: Why are there always panhandlers on Main Street by Junior's pizza, but rarely on Church Street?

Why? You looking to earn some extra cash?

Kidding. "Spanging," which is slang for "spare changing," is explicitly forbidden on the nearby Church Street Marketplace — which exists in a bizarre legal limbo as both a public and privately managed space. Panhandlers are also forbidden to bum change anywhere in the city that blocks egress to buildings. So the facade between Junior's and Church & Main has become a go-to spot.

Q: Why is it that whenever I'm around Perkins Pier, I find myself craving citrus?

Because you need more vitamin C in your pizza-and-beer diet? We can't think of any other reason why that rank smell would have such an effect.

One of Burlington's three wastewater treatment facilities sits just south of the pier. You've probably ridden past it on the bike path — quickly. That smell comes from something called VaporScent, a citrus-based oil designed to neutralize foul odors when processing waste. As a Seven Days reporter put it, "It's like a massive Glade PlugIn for wastewater treatment plants."

Given the smells that could emerge from the plant — see: "pizza-and-beer diet," above — the faintly sweet musk of oranges, cheap perfume and rotting garbage ain't that bad.

Q: I've heard Vermont consistently ranks high in instances of melanoma. But I haven't seen the sun in, like, three months. How is that possible?

That's precisely why. Because we spend about nine months of the year indoors, our risk factor for sunburns greatly increases when we do get out in the sun, in comparison to people who are more acclimated to the sun's rays from being outside more.

As a Seven Days freelancer reported, skin cancer tends to develop when pale white people spend too much time in the sun. Vermont is 94.5 percent white. Hence, higher rates of melanoma. Between 2005 and 2009, roughly 29 out of every 100,000 Vermonters had melanoma, compared to 19 out of 100,000 nationally.

Moral of the story: Sunblock is your friend, even in the winter.

Q: I was hooking up with my girlfriend the other night, and things were going well. Like, really well. Then she stopped and asked if I had protection. I didn't. But I scrambled and found an "eco-friendly" condom on my roommate's dresser. Really? Come on.

Ha. I see what you did there. Nice one.

That was likely the Sustain condom, a product developed by Jeffrey Hollender, founder of Burlington's Seventh Generation, and his daughter Meika. You might recognize SG as the company that makes those eco-friendly household cleaning items like dish soap and paper towels that you feel guilty for not buying because you're a broke-ass student. Anyway, as a Seven Days reporter noted, the Sustain condom is the first-ever "Fair-Trade-certified, organically sourced, vegan, nontoxic, non-animal-tested and GMO-free prophylactic."

So, yes, that eco-rubber will help sustain the environment, though not necessarily, ahem, other things.

Q: I was hanging out at North Beach the other day, soaking up some sun and a cold beer, when this guy in a loud yellow shirt came over and told me to put the beer away. He didn't take it and couldn't have been much older than me. Does the dude actually have any authority, or was he just some buzzkill with bad fashion sense?

Was it a glass bottle? Because that's a no-no. Canned beer is generally OK at public parks — assuming you're of age, of course. But glass is bad news, especially anywhere folks might be barefoot, like a beach.

As for your yellow-shirted friend, he's part of Burlington's Beach & Parks Patrol Unit — or what locals semi-affectionately call "baby cops." Nope, they're not real police and don't have any real authority. They can't make arrests or issue tickets. And they tend to be young — think police interns.

However, parks patrol officers are viewed as an extension of the Burlington Police Department, so you piss them off at your own peril. Doing so is likely to draw the ire of the men and women in blue, who can and will harsh your mellow if you mess with their "babies."