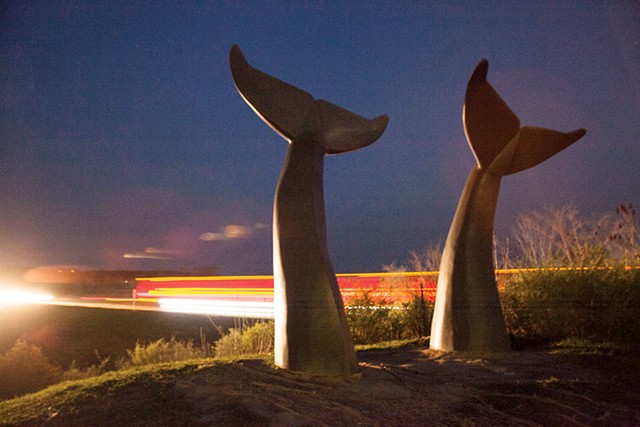 We'll be the first to admit it: The Green Mountain State is a strange place. They don't make those "Keep Vermont Weird" shirts for nothin'. Vermonters march to the beat of their own didgeridoos, and that's a big part of what makes living here so awesome.

When you first arrive, no doubt this quirkiness and creativity will make you stop and say, "What the eff?!" To help you make sense of it all, we've compiled the stories behind some of the Burlington area's most head-scratching landmarks.

Take this tour yourself, then play tour guide when your family and friends visit. You'll feel like a local in no time.

Just north of Oakledge Park, at Burlington's Blanchard Beach, 14 granite slabs stand imposingly in a 43-and-a-half-foot circle, right off the bike path. Vermont's own mini Stonehenge? Not quite.

The so-called Burlington Earth Clock was spearheaded by a local Druid and constructed in 2007 by grassroots nonprofit Circles for Peace. The stone circle acts as a clock, compass, calendar and sundial, and it's the site of occasional solstice ceremonies and sacred circle dances. Standing within the Earth Clock is intended as a way to commune with nature's rhythms and cycles while restoring inner clarity and strength — and bringing peace to the planet.

If you've driven Interstate 89 between exits 12 and 13, you've seen this pair of near-life-size granite whales diving into a sea of grass. What are they doing by the side of the highway — and in New England's only landlocked state, for that matter?

The not-so-seaworthy sculpture is titled "Reverence" and was created in 1989 by Vermont artist Jim Sardonis. Originally commissioned for a hotel that was never built, the tails found their eventual home as the centerpiece of the Technology Park walking trail, visible from I-89.

And their presence in Vermont isn't so outlandish, after all: Beluga whale fossils have been found all around Lake Champlain, evidence that the Champlain Valley was once an inlet to the sea. So Sardonis' whales make a powerful statement about the ever-changing nature of life on Earth.

Rumors fly around this house on Colchester Avenue, which is emblazoned with the message, "Cut consumption not foreskin!" Some wonder if it's a weird UVM frat. Others speculate that its residents were in a nudist cult.

In fact, owner Jerri Kohl is far from a deranged hippie cult leader. He's a software developer, environmentalist and maybe-nudist who simply wanted his home to stand out more than purple paint and pink polka dots could achieve. His two-pronged slogan advocating sustainability and decrying circumcision came to him, appropriately, in the shower.

Towering more than 40 feet over an unassuming patch of grass on the north side of Flynn Avenue, this obscure obelisk is not an Office Space-style prank or the handiwork of a disgruntled Staples employee.

Rather, it's a satirical sculpture by Burlington architect Bren Alvarez that comments on the bureaucracy of urban planning. Called "File Under So. Co., Waiting for...," it's a reference to the controversial Southern Connector roadway, which would direct traffic from I-89 to downtown Burlington, relieving Shelburne Road congestion. The 38 filing drawers represent every year from the road's 1965 conception to the cabinet's 2002 construction. If Alvarez wanted, she could add another 14 drawers for the years since, as the now-called Champlain Parkway is still — like her cabinet — up in the air.

UVM students nap under it in the warm months and ski down it in the snowy ones. But few of them — or their profs or longtime Burlingtonians, for that matter — know the story behind this bizarrely shaped concrete structure that goes by the name of the Flying Diaper. WTF?

Located on the university's Redstone Campus, the Diaper took flight in 1968, thanks to a graduating civil-engineering class. Professor Burdette "Bud" Stearns gave his students a design challenge, and Burlington native William Arnold's unique shape — a hyperbolic paraboloid, made entirely from straight lines that appear curved — won the competition. Somewhat miraculously, the class then managed to get through university red tape and actually build it, and the Diaper has been flyin' high ever since.

If you could still catch a train out of the old Union Station at the bottom of Main Street, your next stop might just be over the rainbow. At least, that's what the winged monkeys on the roof suggest.

Six intricate metal monkeys on that building and nearby Main Street Landing set a scene straight out of The Wizard of Oz. Late Vermont artist Steve Larrabee forged these steel and copper creatures. The first two were commissioned in 1975 for the now-defunct waterbed shop Emerald City, located on the corner of Bank and St. Paul streets. Over the decades, the monkeys migrated toward the lake for a better view, and the "flock" grew — the original simian couple even welcomed baby twins in 2004. One thing's for sure: You're not in Kansas anymore.

Find more answers to your burning questions about local oddities in Whiskey Tango Foxtrot, a column that appears every other week in Seven Days.