WTF: Are Yellow Jackets Drunk This Time of Year? 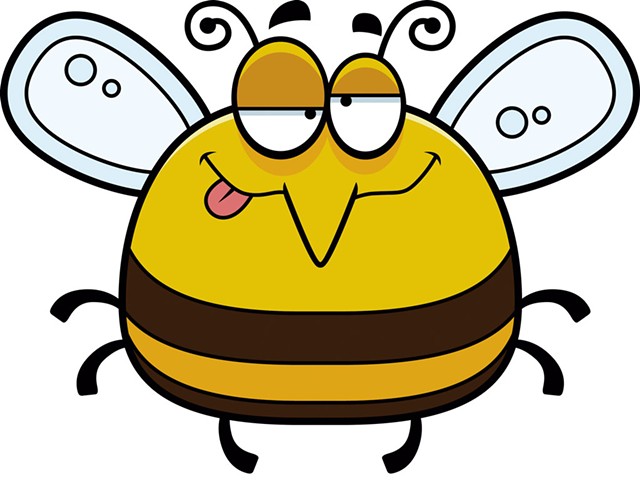 Steve Crafts is a partner and chief creative officer at Place Creative in Burlington. He is also Seven Days' most prolific submitter of "Whiskey Tango Foxtrot" questions. Last week, he emailed us with the following query.

"WTF is up with yellow jackets this time of year in Vermont?" he asked. "Are they drunk on fermented apples or something? Are they just getting nuts because they know winter is coming soon? Seems like they ramp up their peskiness this time of year."

Crafts' email was timely for another reason. Just days before, the Independent Block building, home to Seven Days and other offices, required a pest-control expert to exterminate a large hive of yellow jackets that had set up shop on the roof and were invading upstairs offices.

It's intriguing to imagine Vermont's yellow jackets, which are not bees but wasps, becoming surly in autumn because they're tanked on tainted fruit. If true, it would put them in the company of other members of the animal kingdom — including certain insects, birds and large mammals — that get fried on fermented foodstuff.

In fact, blotto beasts aren't at all uncommon. In November 2015, National Geographic reported that certain species of male butterflies are attracted to and drink beer if it's available because it supercharges their spermatophores, or sperm packages, which they then give to females as a "nuptial gift." That's as unromantic as it sounds.

A study done at the University of Missouri, published in the March 2012 issue of the journal Science, compared the diets of male fruit flies that had successfully mated to those that had struck out. As researcher Troy Zars discovered, courting male fruit flies that were rejected or sex-deprived sought solace in another behavior: consumption of alcohol. Zars actually titled his study "She Said No, Pass Me a Beer."

Drunken fruit flies are fairly innocuous. A 1,500-pound moose? Not so much. In November 2007, Julia O'Malley at the Anchorage Daily News in Alaska reported on the inebriated exploits of a bull moose she dubbed "Buzzwinkle." Apparently, the moose found some fermented crab apples in the courtyard of Bernie's Bungalow Lounge, an Anchorage martini bar whose slogan is "There is no such thing as too much of a good thing."

Indeed, Buzzwinkle gobbled down one too many, then got his antlers tangled in a string of LED Christmas lights and trailed them around downtown Anchorage. Talk about getting lit.

Turns out, juiced-moose stories are fairly common in Norway and Sweden, where the drunken ruminants have terrorized schoolchildren, crashed parties and stumbled into swimming pools. In one widely reported case, a blitzed moose got itself lodged in an apple tree.

Vermont's moose population seems to be more abstemious — or perhaps the quadrupeds conduct their drunken revelry out of public view.

"It's not something I've heard about happening in Vermont," said Cedric Alexander, a wildlife biologist and moose expert with the Vermont Fish & Wildlife Department. "I don't see why it might not happen, but ... I don't think any biologists have confirmed it. How could they?"

In the Green Mountain State, the lightweights of the animal kingdom are fruit-eating birds such as cedar waxwings, bohemian waxwings and American robins, according to the Vermont Institute of Natural Science in Quechee. Grae O'Toole, lead wildlife keeper at VINS, explained that these chirpers sometimes eat dropped fruit that have begun to ferment in the fall and, like intoxicated humans, become confused and disoriented.

"If they do eat too much at once, it can be fatal," she said, "but that is less likely to happen."

More commonly, the birds simply lose their way, fly into windows or cars, fall off their perches, or remain in the open, where they're easy prey for predators.

However, other diminutive winged critters are more adept at holding their booze. A 2010 study done at the University of Western Ontario in Canada found that many species of bats consume fermented fruit but have no trouble staying airborne and navigating, even with blood alcohol concentrations that would be considered felonious for human pilots.

Back to Vermont's yellow-jacketed flyers. Do they actually become belligerent boozers by the time Oktoberfest rolls around? No, according to Margaret Skinner, an entomologist and research professor in the University of Vermont's Department of Plant and Soil Science.

"Indeed, yellow jackets are definitely more aggressive this time of year," she explained via email, but "it is primarily linked with their biology ... Their diet changes as winter approaches. They tend to search out food rich in sugar to encourage the development of the new queens."

One reason yellow jackets seem more bothersome this time of year, Skinner suggested, is because there are so many more of them. By autumn, a single nest can house 5,000 individuals.

But, as she pointed out, yellow jackets are beneficial to humans: They're pollinators and feed on grubs, caterpillars, house flies and other insects that consume food crops.

"People should know, though, that the yellow jackets and hornets in the current nests will all die when we have a few killing frosts," Skinner added. "The mated queens will leave the nest and find a cozy place to overwinter. She will come out next spring to start a new colony in a new location."

So perhaps we should cut the yellow jackets a little slack for acting grumpy. They have just weeks to live and no time to get a buzz on.

The original print version of this article was headlined "Are Yellow Jackets Peskier This Time of Year Because They're Drunk?"