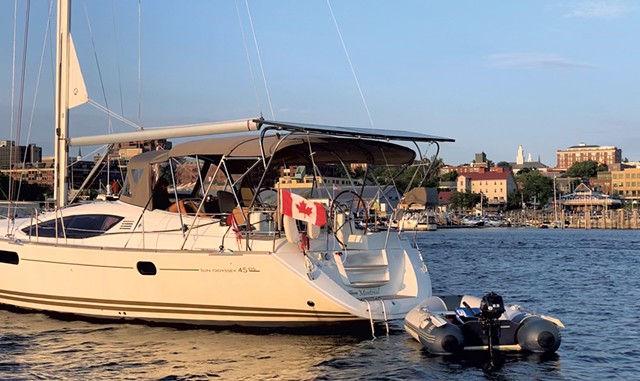 A Burlington woman emailed us to ask about the increasing number of Canadian boats she's noticed recently on Lake Champlain. She and her husband, boaters on the lake for more than three decades, saw few Canadian craft last year.

This summer, she has spotted eight to 10 boats on the Burlington waterfront alone — mostly cabin cruisers, large sailboats and dinghies near Perkins Pier — some of which bore Québec registration numbers.

"You know they're Canadian," said the woman, who asked not to be identified, "because they have French boat names and fly huge Canadian flags. Very obvious."

On March 21, 2020, in an effort to stop the spread of COVID-19, the U.S. restricted entry at both its northern and southern borders to essential travel only. The restrictions remain in effect and apply to all nonessential vehicles, including passenger rail, passenger ferry and pleasure boat travel. Canada reopened its land border to Americans on August 9. But the U.S. restrictions aren't set to expire until September 21.

The financial impact on some Lake Champlain marinas and other maritime businesses has been huge. A representative of North Hero Marina, where half of the clientele is Canadian, told Seven Days that business is 10 percent of what it would be in a normal year. Across the lake, at New York's Rouses Point Yacht Club, owner Justin Roberge told the North Country's Press-Republican in July that he was receiving "zero income" because nearly all of his clients are Canadian.

But there are hints that some Canadian boat traffic is trickling back to Vermont. Peter Farrell manages the Champlain Marina in Colchester. "Only a handful" of Canadians moored and wintered their boats there even before the pandemic, he said, but many more passed through. Last year, without the Canadians, the Malletts Bay marina's fuel sales and short-term slip rentals declined significantly.

This year, however, Farrell said he's seen more Canadian boats on the water, though still not many.

"Definitely on the VHF radio I've heard a little more French chatter," he said. "I know there are some people who have made it across the border."

A manager at the Naked Turtle, a waterfront restaurant and bar in Plattsburgh, N.Y., said he's seen "a few" Canadian boaters, "but not like our normal traffic."

It's unlikely that many Canuck pleasure craft are evading U.S. border defenses to enter illegally. Patrol vessels, surveillance drones and remote sensors detect all vessels that enter American waters. Nevertheless, those who believe in fair play may be irked to learn that some wealthy Canadians have found a way to skirt the rules.

First, a primer on how water border crossings differ from land ones. The Swanton sector of U.S. Customs and Border Protection is responsible for 295 miles of international boundary, including 92 miles of water boundary, running from the Maine-New Hampshire border to the Buffalo sector in western New York.

During normal times, a Customs and Border Protection spokesperson said, boats aren't routinely stopped, boarded or inspected at the border; their occupants aren't questioned the way travelers are at terra firma ports of entry. Private vessels entering U.S. waters are required simply to notify border agents of their arrival. To do that, many boaters use Customs and Border Protection's mobile app, ROAM — Reporting Offsite Arrival–Mobile — which allows a Customs officer to gather information and conduct video interviews and inspections of passports and IDs. Several Vermont boat docks, including one at Derby Line, offer iPads that boaters can use to check in if they don't have the app.

Since March 2020, the U.S. Border Patrol and U.S. Coast Guard have stepped up efforts to stop and question travelers by boat near the Canadian border. Those engaged in nonessential travel, a Customs and Border Protection spokesperson said, get turned back.

So, how are some Canadian pleasure boats getting in?

Actually, many of those boats, if not most of them, are likely to have already been in the U.S. when the pandemic struck. It's the boaters themselves who've had to find creative ways to cross the border.

One marina owner, who asked not to be identified, explained how some of his Canadian clients accomplish that feat. They drive to an airport in Saint-Hubert, Québec, where a commercial truck picks up their vehicle, drives it across the border — commercial traffic has been allowed in throughout the pandemic — and parks it at New York's Plattsburgh International Airport. "Then they'll hop in a twin-engine airplane for a 12-minute flight" to Plattsburgh, he said.

This marina owner said he has one client who shipped a fully loaded Mercedes van across the border, flew to Plattsburgh and then drove south to spend the winter in the Florida Keys.

"He showed up here in early May [and] put his boat in," the owner said. "And he got his two [COVID-19] shots for free from the U.S. government."

Another couple flew in from Saint-Hubert a couple weeks ago, he added, and he expects another client this week. "So I've got probably six Canadian boats in the water."

Such travel may sound sketchy, but it's perfectly legal. Since the start of the pandemic, Canadians have been permitted to fly into the U.S., regardless of their vaccination status, provided they can present proof of a negative COVID-19 test taken within 72 hours of their flight.

Also, don't expect the Coast Guard or Border Patrol to stop and inspect boats simply because they're flying Canadian flags. What matters, according to the Coast Guard, is where the vessel is registered, not the colors it's flying. Just because someone hoists a Jolly Roger flag doesn't make their vessel a pirate ship.