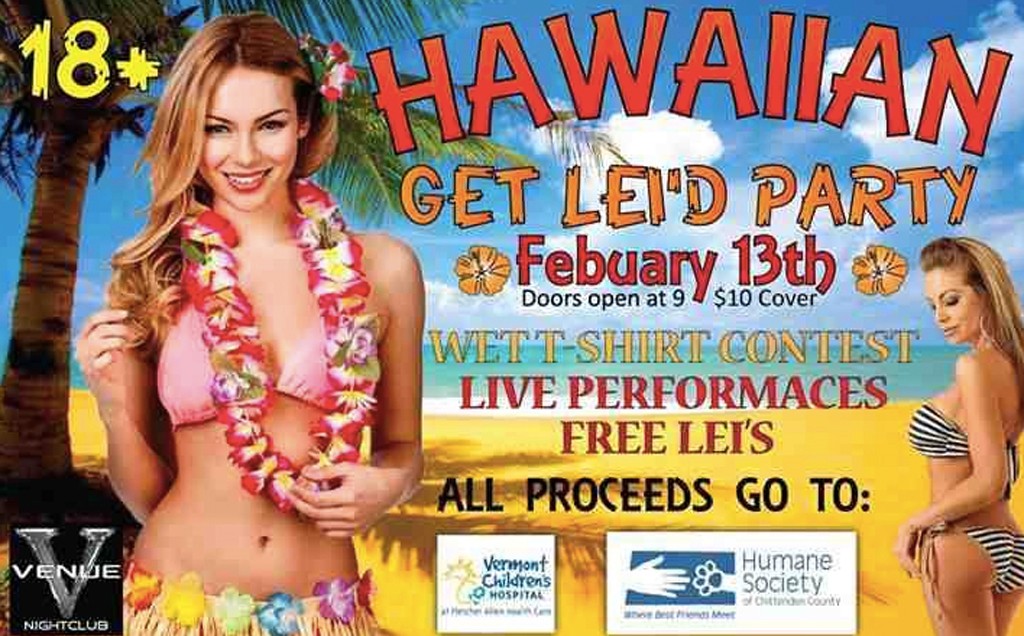 Over the years, the Humane Society of Chittenden County and the University of Vermont Children's Hospital have reaped charitable donations from a variety of community fundraisers: walk-a-thons, golf tournaments, 5K runs, canine cocktail mixers. But recently Seven Days music editor Dan Bolles chanced on promotional material for a novel fundraiser that promised to benefit both. Found on the website of Venue Nightclub in South Burlington, it advertised a Hawaiian Get Lei'd Party.

The poster bore logos from both local nonprofits, alongside depictions of young women in bikinis and references to a wet T-shirt contest. The combo tripped our WTF alarm. Did those family-friendly organizations actually lend their names to a night of nipples for the sake of neutering and neonates?

The philanthropic flesh fest offered additional cause for pause. Not only was the ad riddled with typos and misspellings ("Febuary," "lei's," "performaces"), but it featured an outdated corporate logo for the UVM Children's Hospital, which no longer uses "Fletcher Allen" in its name. Still, with tickets being sold through the Flynn Center for the Performing Arts box office, the February 13 event seemed legitimate.

Reached by phone, Venue Nightclub owner Mike Couture explained that he was approached last fall by a mother and daughter who wanted to throw a winter party to "get people thinking about nice weather." They hoped to use the proceeds to "give something back" to the community.

"We kind of asked, 'How can we spice this up?'" Couture recalled. His suggestion: Sell tickets to college-age dudes who wanted to see women in transparent tees get doused in cold water. He envisioned the event as similar to the "foam parties" he used to hold at Venue — until the South Burlington fire marshal shut them down.

"If you go down to the tropics in February, this is the kind of stuff you see all the time," Couture said. "We're thinking, like, spring break. I know when I went to spring break back in 2005, it was the wildest and craziest two weeks of my life."

When asked if the UVM Children's Hospital and the Humane Society of Chittenden County had signed off on the adult-themed activity, Couture replied, "Absolutely, yeah."

His assurance came as news to spokespeople from both organizations, who insisted they had no knowledge of the fundraiser until Seven Days made inquiries.

Claire Giroux-Williams, the Humane Society's director of development and communications, characterized the event as "a little outside our taste level.

"We have a lot of events in the community that people do on our behalf," she added. "This is certainly not something we're comfortable with."

The tropical-themed fête met with an equally chilly reaction from UVM Medical Center spokesperson Mike Noble, who reported, "Our development office knows nothing about it. I don't know what he's trying to pull here, but it doesn't look very reputable to me."

This is not the first time a local nonprofit has been named as a beneficiary without its permission. In 2010, a Burlington man posted ads on Craigslist inviting survivors of sexual assault to participate with him in a "theatrical production" to benefit the "Burlington Rape Crisis Center." When the Women's Rape Crisis Center (renamed HOPE Works in 2011) learned of the postings, it immediately disavowed any involvement with the project or its producer. The organization put a warning on its website and notified the police.

Martha Maksym, executive director of the United Way of Chittenden County, explained that, as a rule, nonprofits are mindful of their public image in affiliating with third-party fundraisers (i.e., events not organized by the group itself). Generally, she said, nonprofits make sure that benefits held in their name align with their organizational values and mission.

Another concern, she said, is ensuring that the money raised at the event goes to the charity it purportedly supports, a process that's harder to verify with third-party fundraisers.

What inspired the Hawaiian Get Lei'd Party? The Colchester mother who brought the idea to Couture asked not to be identified, and she told Seven Days the idea began more innocently than the poster might suggest. Last fall, she related, her daughter, a high school senior, asked to celebrate her 18th birthday in Montréal with friends. Concerned about letting the teenagers cross the border without chaperones, the mother suggested that they instead organize a party at Venue, which had previously hosted events for high schoolers. She recalled meeting with Couture, spelling out their intentions and leaving him a $750 deposit.

"But then everything kept changing and changing," the mother asserted. What began as a spring-fling-style party for her daughter — intended to raise money for animals and kids with cancer — became "something really sleazy" that predominantly targeted men 18 and older. (Many of the daughter's friends are still minors and would have been barred from the 18-plus event.) Her daughter is "devastated," the woman said, and has since washed her hands of the benefit. The mom has retained a lawyer to try to recoup the $750 deposit.

Shortly before press time, Couture called Seven Days to report that the Hawaiian Get Lei'd Party had been canceled owing to "lack of ticket sales." Asked to clarify why neither organization had signed off on the event or the use of its logo, he said communicating with the nonprofits was supposed to be the job of the mother-and-daughter organizers. He won't be returning the pair's deposit, he confirmed, as it's too late for him to book another event on that night.

Nancy Cathcart, CEO of the Humane Society of Chittenden County, says she considers the entire incident a teachable moment for the organization. She has since contacted the UVM Medical Center to review a copy of its third-party fundraising policies.

"We get lots of wonderful support, from cookie sales to dance events, but we don't monitor them very well," Cathcart said. "This taught us a lot."

The original print version of this article was headlined "A Wet T-Shirt Contest for Sick Kids and Stray Animals?"