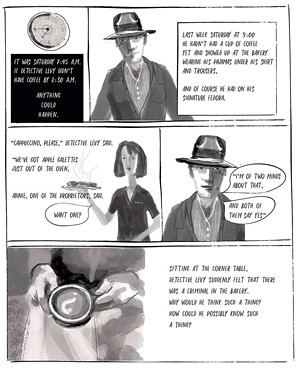 At first, novelist Howard Norman was simply a devoted customer of Bohemian Bakery, first at its original location close to his home in Calais and then after it moved to Montpelier in 2016.

Norman became friendly over the years with the bakery's married co-owners, Robert Hunt and Annie Bakst. "He was the first customer almost every Sunday," Bakst recalled of the days the couple offered a weekly pastry pop-up from their East Calais farmhouse.

"We developed a light friendship," is how Bakst put it. "I had heard he was an author. I liked him as a person."

Then one day a couple years ago in the Montpelier bakery, Bakst recalls Norman asking her, "Annie, you illustrate, right?"

Norman published his most recent book, The Ghost Clause, in 2019. At the time, he announced that it would be his final novel; he is currently working on a memoir about friendship.

The writer had also been percolating another project based on an unpublished radio play, Detective Levy Detects, penned about 10 years ago. Readers of Norman's 2017 novel that pays homage to film noir, My Darling Detective, will recognize Detective Levy Detects as the radio drama to which that book's main characters are devoted.

Norman had heard that Bakst was an accomplished illustrator and designer. He hoped she might be interested in working with him to transform the material into a film-noir-style graphic novel series set in Montpelier.

Writing a graphic novel was a new endeavor for the writer. The format was also new for Bakst, though she had illustrated books before.

The first volume in the series, titled Detective Levy Detects, was published this fall.

"Bakeries have always been very romantic places for me," Norman said.

Through the bookmaking process, the two have become good friends and successful creative partners. That was not a given, both agreed. "This was based on a large volume of trust," Bakst said.

"I would say collaboration didn't come naturally to me, as it doesn't for many people who work alone," Norman admitted. "But we now have a common sensibility. It's like a duet of some sort."

"I adore him, and I adore working on it," Bakst said. "There's tons of back-and-forth, but all in good humor."

Both are happy with the resulting work, and Norman recently delivered the manuscript for their second book to Bakst.

"It has a different kind of presence in the world than what I have usually written," Norman said. "It's a personal interpretation of the term 'noir.'"

"He says there are going to be 10 episodes," Bakst said with a laugh. "I hope we live that long."