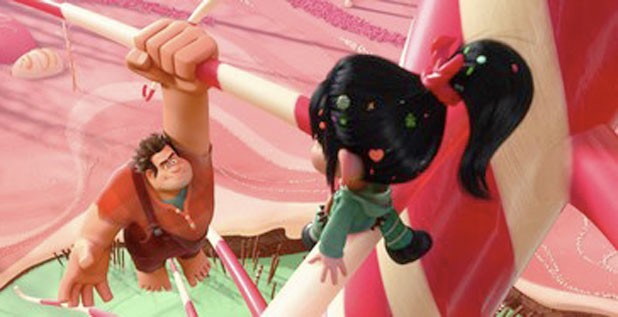 Kids’ movies don’t have to be good to rake in the dough. They just have to be good babysitters. Wreck-It Ralph is the exception: an animated adventure with enough clever writing and visual style to keep adults entertained for 108 minutes, too. The surprise is that it comes not from Disney’s most prestigious property, Pixar, but from the mouse itself.

This is director Rich Moore’s first feature, but he’s responsible for dozens of episodes of “Futurama” and “The Simpsons,” and the experience shows in his knack for combining slapstick with satire and sight gags. Many of those throwaway jokes involve the 30-year history of video games. But viewers who haven’t touched a joystick since the heyday of Pac-Man will still have no trouble following the story, which is set behind the scenes — or, more precisely, behind the screens — of a present-day arcade.

Its title character is a relic of the era when many of today’s parents were kids. Voiced by character actor John C. Reilly, Wreck-It Ralph plies his trade as the destructive villain of a classic arcade game called Fix-It Felix Jr., which we see at the film’s opening in all its pixelated, eight-bit-scored glory. Ralph’s arms may be gorilla like, his fists gigantic hammers, but Reilly imbues him with rue and courtliness. He’s weary of living in a dump and sowing wreckage for the game’s hero, the perky, goody-two-shoes Felix (Jack McBrayer), to repair. He wants to be the hero for once.

So begins an odyssey of self-realization that would be pretty standard for an animated film, if not for its imaginative details. Ralph’s first stop is a support group for game villains, at which he has to intone, “I’m bad, and that’s good.” This and later sequences introduce a conflict with genuine stakes: Arcade games need their characters — or, technically speaking, their chunks of code — to do certain things. Those who achieve independent consciousness and step out of line make the game malfunction from a human player’s perspective, precipitating doomsday when someone pulls the plug. In short, just like in real life, self-realization isn’t as simple as grabbing a brass ring.

Or a gold medal, which Ralph sets out to win in a first-person-shooter game called Hero’s Duty — only to be shocked by its gritty, high-definition violence. He flees to a gorgeously saccharine, anime-inspired racing game called Sugar Rush and strikes up a friendship with one of its aggressively cute sprites, Vanellope von Schweetz (Sarah Silverman), who turns out to be on a dangerous quest of her own.

Wreck-It Ralph doesn’t tug adults’ heartstrings as skillfully as Up or the Toy Story movies, but it’s consistently funny, and the surreal gamescapes offer plenty of eye candy — literally, in the case of Sugar Rush, which looks like it was conceived by Dr. Seuss on a dessert bender. Perhaps the best testament to the movie is that, like Toy Story 3, it has a pivotal scene in which even adults may find themselves wondering if this story will have a happy ending.

It will, of course — this is Disney, not the Brothers Grimm, and problems will work themselves out a bit too neatly. But Moore & co. have made a movie about the repetitive joys of gaming with a plot that doesn’t go in circles, and that’s good news for fidget-prone parents everywhere.