WPA Heritage on View in Rare Show at the Wood Gallery 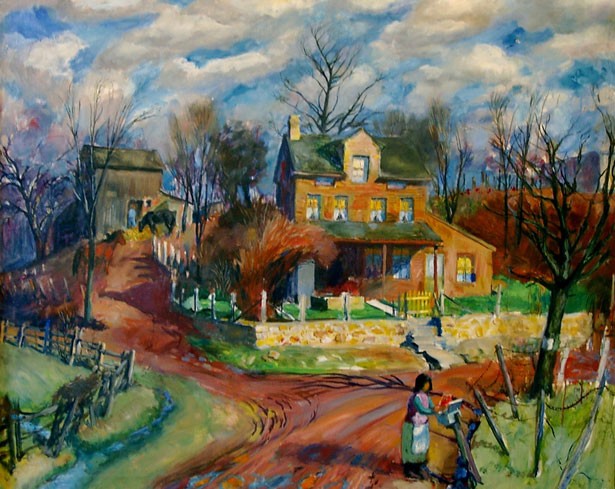 One of the most important American artists of the 20th century is virtually unknown today - George Biddle. In his youth he was a classmate of Franklin Delano Roosevelt, and he later became a competent Social Realist painter. When Roosevelt entered the presidency in 1933, it was Biddle who suggested to FDR the idea of creating a federal arts program. The rest, as they say, is history. A snapshot of that fertile history is now on view in "Vermont's WPA Collection" at the T.W. Wood Gallery in Montpelier.

Though the Works Progress Administration (WPA) instituted many programs to alleviate the economic deprivations of the Depression, its efforts in the arts have become almost legendary. Wood Gallery Executive Director Joyce Mandeville notes, "For the first time in our history, artists and writers were considered workers and, as a result, the nation has been left with this treasure trove of work."

That's no exaggeration. The WPA Federal Art Project lasted from 1935 till 1943 and purchased approximately 100,000 artworks from virtually all of the most important artists who plied their trades from early to mid-century, along with a legion of lesser-known painters, printmakers, photographers and sculptors. The Wood's exhibition of 37 paintings and 10 prints is the best compendium of American work of that era available in the Green Mountain State. The U.S. government owns the works in the Montpelier show, as it does all WPA-produced art. The feds have dispersed thousands of such artworks among public venues in each of the 50 states; the T.W. Wood Gallery is Vermont's sole official repository.

Reginald Marsh, Joseph Stella and Paul Sample are among the better-known names in the show. Others, such as Bucks County, Pennsylvania, artist Francis Speight, are wonderful painters but not as critically acclaimed. Speight's 1938 "Box Holder #27" is a figurative rural genre scene portraying nothing more grandiose than a farm woman checking her mailbox. But the swirling composition focuses on her farmhouse, essentially suggesting that the woman's world revolves around her home.

Among the dozens of other great finds in the Wood show is "Car Stops 6 a.m." by Southern California painter Millard Sheets. His 1936 Social Realist street scene of female workers, perhaps domestic help, waiting to be picked up to go to work is a great example of the style that dominated WPA programs. Some of the most important Vermont artists in the exhibition, such as Hilda Belcher, are represented with watercolors of village and domestic life as well as landscapes.

American painter Stuart Davis said at the onset of the WPA, "The artists of America do not look upon the art projects as temporary stopgap measures, but see in them the beginning of a new and better day for art in this country." Unfortunately, that noble, spirited beginning didn't survive the century. In 1996, a Republican-controlled Congress banned the National Endowment for the Arts from making direct grants to individual visual artists. The notion of purchasing prints and easel paintings, other than those commissioned for specific venues, ended with the WPA itself.

The feds also don't provide funds to maintain the collections delegated to caretaking institutions such as the Wood. That's one reason why exhibitions such as this one are so rarely mounted. It's also a reason to support the gallery that's protecting such an important part of Vermont's artistic heritage.