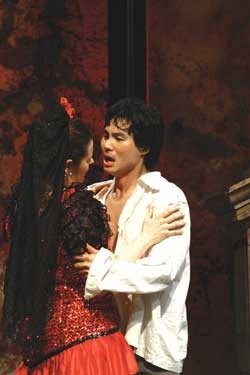 It’s not often that world-renowned opera stars make their way to Vermont. And it’s even rarer to see one on the order of acclaimed tenor Yonghoon Lee. Lee has sung the lead roles in the Metropolitan Opera’s Don Carlo and Carmen productions of the past few years and will appear there again opposite Anna Netrebko in Il Trovatore in 2015.

And that’s just at the Met. The South Korean tenor has sung in virtually every major opera house in the world. Having just returned from a six-week stint down under as the lead in Tosca at the Sydney Opera House, he will head to Vermont this Saturday to headline a single, must-see performance: the Opera Company of Middlebury’s 10th Anniversary Benefit Concert.

Lee’s local appearance is not as random as it seems. He sang Don José in OCM’s first production, Carmen, in 2004 — his first professional gig while he was still a student at Mannes College The New School for Music in New York.

This was before Middlebury’s Town Hall Theater had been fully renovated, according to artistic director Doug Anderson, who distinctly recalls that season’s “98-degree heat” and “the 50,000 bats.”

The fledgling company, which still produces one opera a year (with a second, semi-staged one added in 2012), had so little money that no prop knife had been secured by the dress rehearsal. In the final scene of Bizet’s opera, a crazed and jealous Don José murders Carmen. Lee, Anderson recalls, pulled out a banana, which caused everyone to laugh and broke up the tension.

Lee was making light of a Vermont stint that had had a frightening start, he reveals during a phone call from his New York City home. “At the time, I was a student and very poor,” he recalls. After arriving in Middlebury, he realized that he had misread the contract: He would be paid $500 not for each of three performances but for all three. “I didn’t know that,” he recalls solemnly. “We have to eat.”

But the experience was worth it, Lee says, for “the passion. How wonderful to perform onstage, even if a small stage. It made me so happy. I can communicate with people and make them happy.”

Later that year, Lee returned to Middlebury to sing a solo recital that included the aria “Recondita armonia” from Tosca. Anderson and OCM’s board members were so bowled over by his rendition that they chose the Puccini warhorse for their 2005 production so Lee could sing Cavaradossi. (YouTube videos of Lee more recently performing “Recondita” and other now-signature arias attest to his incredible technique and control, as well as to a powerful emotional expressivity.)

Then, in 2007, Lee stepped in on two weeks’ notice to fill the title role of Don Carlo in Santiago, Chile, and turned the opera world’s head. His schedule is now booked through 2018.

Anderson explains how the company managed to lure Lee back to Vermont: “We started planning this years ago and waited for him to give us a date.” Lee offered August, his only month off between opera seasons. The month is also one of the few extended periods he can spend with his wife and 2-year-old son, so he’s making the trip a family vacation.

Having shaped the anniversary concert around Lee, OCM turned, at his suggestion, to its other most successful alum — Stephanie Weiss, a mezzo-soprano who was still singing as a soprano when she performed opposite Lee as Micaela in Carmen that first year.

“[I thought,] if we can perform together, that will be very emotional,” explains Lee.

Weiss attended Mannes with Lee; a faculty pianist who worked with them both, Ted Taylor, will be the accompanist at Saturday’s concert. Lee requested to do two duets with Weiss for the recital in honor of their OCM experience, including the final, devastating duet of Carmen.

Weiss has gone on to establish a career in Berlin, singing regularly at Deutsche Oper Berlin and teaching at her private voice studio as well as at the American Institute of Musical Studies in Austria. She recently debuted with the San Diego Opera and will sing there again as Giannetta in L’elisir d’amore next year.

David Clark, president of the board, says OCM chose two of its more recent singers, “who we think are going to have a major career,” to round out the program. Soprano Bevin Hill sang in the chorus of The Pearl Fishers in 2010 and stood out so much she snagged the part of Lisette in La Rondine the following year. And Branch Fields, a bass, juggled his part in 2012’s Thaïs with a burgeoning career playing Emile de Becque in South Pacific. Fields has also sung Zuniga in Carmen with New York City Opera.

Clark says part of what draws singers to return to Middlebury is the personal interest the board takes in their careers. Some members recently carpooled to Opera Saratoga to see Hill sing and will even attend her upcoming wedding. Anderson saw Lee in both Met productions, and Clark traveled to see the tenor debut at Covent Garden and the Vienna State Opera as Cavaradossi in Tosca. Next year Clark will see Lee sing Andrea Chénier in Zurich.

“I think he appreciates seeing a friendly face,” says the former town librarian and adds that he usually meets Lee for dinner before his performances. For successful singers, Clark says, “It’s a tough, tough life. You’re far from your family, and you don’t [always] know the language.”

Lee speaks openly of the additional barrier he faced as an Asian singer: an ingrained prejudice in the opera world against casting nonwhites in leading roles. “The high places, they don’t want Asians as principal roles,” he says frankly. “Even China, they don’t want to have any Asian singers. It’s sad but true.”

Lee’s own foot is finally in the door, but, he says, “If I go to a new place [opera house], I have to conquer their thinking.”

He’s managed to do that everywhere: Every house, including the notoriously tough La Scala in Milan, has wanted him to return.

No conquering will be necessary in Middlebury, where some audience members will likely recall the tenor’s original Vermont appearances. If the YouTube clip of Lee singing “E lucevan le stelle” from Tosca is any indication, that aria alone — which he’ll deliver in the second half of the program — will have audiences roaring to their feet.