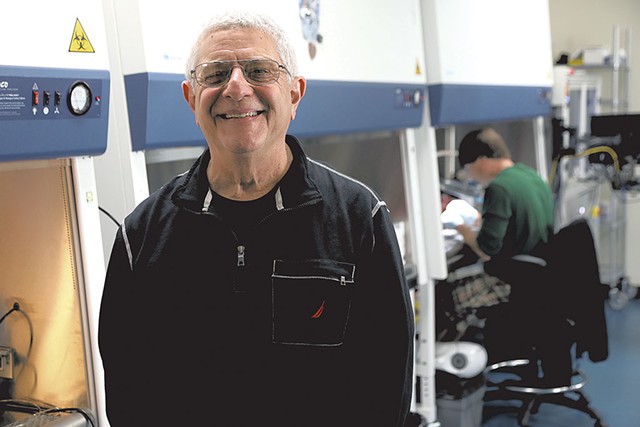 At the Warshaw Molecular Motors Group, a research laboratory at the University of Vermont College of Medicine, David Warshaw and his eight colleagues spend their days peering through high-powered microscopes, looking at motors that are 5,000 times smaller than the diameter of a human hair.

They're studying the tiny engines that power the human heart and how genetic mutations of those engines can lead to genetic forms of heart failure. Those include sudden cardiac death, which occurs in about one in 200 people worldwide. High-tech microscopes allow Warshaw's group to magnify cellular structures so they are visible to the eye, but the scientists must use them in conjunction with a light-splitting optical filter to see the cell's individual components.

"Light has many wavelengths or colors," Warshaw explains. "You see them in a rainbow. The optical filters allow you to split light into all its different colors, so you can have one cellular structure light up with one color, and another one in a different color. You can start asking some very specific questions about biological structures just by differences in color."

The optical filters in Warshaw's microscopes didn't come from China or Japan, or even Boston. They were made in Bellows Falls by Chroma Technology Corp., a 128-employee company founded in 1991.

It's an exciting time for Chroma. To modernize production and meet a growing demand for its filters, the company is adding a 42,000-square-foot facility to its headquarters between Route 5 and the Connecticut River, more than doubling its footprint. And in May, Chroma's cofounder and CEO, Paul Millman, received the Terry Ehrich Award for Excellence in Socially Responsible Business from Vermont Businesses for Social Responsibility.

Announcing the award, Jane Campbell, VBSR's executive director, said of Millman: "His company's practices exemplify a business approach that places a high value on employees and the company's surrounding community. And, by converting his business to an employee-owned company, Paul ensured that the equity and profits would be shared among employees."

"They have their finger on the pulse of where science is moving." David Warshaw, University of Vermont College of Medicine tweet this

The company's attention to its employees seems matched only by its commitment to advancing science. "The thing that's kind of unique is, they have their finger on the pulse of where science is moving," says Warshaw, "and it guarantees their position at the top of the world of optical filters." He began working with Chroma in the mid-1990s and hasn't procured his optical filters anywhere else since.

Millman, a young-looking 69-year-old with short gray hair and square glasses, isn't the most likely person to launch and lead a technology company with $30 million in sales. For starters, his parents were communist activists in Brooklyn in the 1930s and '40s, and he was a member of the left-wing Students for a Democratic Society while at Antioch College in Ohio. Millman got no scientific training there and dropped out before attaining a degree.

Instead, he moved to New York in 1968, where he helped found the underground newspaper Rat and then worked at the Liberation News Service, a sort of Associated Press for underground and radical newspapers. Millman did get a bachelor's degree in 1969 from the New School for Social Research, but it was in interdisciplinary studies in the social sciences.

During the 1970s and '80s, he moved from job to job, as if searching for his place in the world. Millman bartended in Oregon, got a graduate teaching degree in New Hampshire, worked at a daycare center in New York, sold brass beds and imported Indian wall hangings, and even managed the famous Blue Note jazz club in Manhattan. He visited Vermont in 1987 because his cousin lived in Newfane, he recalls, and went to the state employment office to look for a job. On the basis of his limited sales experience, someone there suggested that Millman apply for a sales job at Omega Optical in Brattleboro. After a little haggling, he was hired at $9 per hour.

Millman was tasked with selling optical filters, something he knew nothing about, but in time he learned enough to discern what his customers wanted. He still has that skill today. "The one thing he does know is people," Warshaw says. "He can cut through the chaff and understand what's important to people and where the field is going, and who the movers and the shakers are. And he cultivates those relationships over time."

Still, the job at Omega didn't last. After three years, the company's founder and owner, Robert Johnson, fired Millman for insubordination. "He was terminated for disobedience of his sales manager," Johnson told Vermont Business Magazine in 2004. Millman countered: "Bob Johnson hired someone to be our boss who had no experience in the industry."

Whatever the circumstances, Millman didn't brood over being fired. He decided to apply for a job as "director of euphoria" at Ben & Jerry's in Burlington. Shortly after, Millman and six former colleagues from Omega began discussions about starting their own optical filter business. One of them departed quickly, leaving the other six to cofound Chroma. With $180,000, they bought used machines from defunct Boston companies and set up shop at Cotton Mill Hill, a business incubator in Brattleboro.

Omega was an employee-owned company, and, from the start, Chroma's cofounders decided to do something similar. Every year, each full-time Chroma employee gets 200 equity shares of the company. That arrangement appeals to Millman because, he says, "It's fair." Moreover, Chroma's employee ownership — which is essentially a stock bonus plan — rewards seniority.

Whether the cofounders simply enjoyed dumb luck or saw new scientific advances on the horizon, Chroma has had exquisite timing. In the 1980s and '90s, research-grade microscopes were being equipped with optical filters that could separate different shades of fluorescence. Then, in 1996, scientists discovered how to create and control bioluminescent dyes in the form of a protein that could be injected into living organisms without harming them. This effectively allowed researchers to paint portions of cells, genes or entire organs different colors.

As a result, scientists began developing instruments that measured fluorescent radiance to diagnose disease, study biological abnormalities and perform genome sequencing. The proliferation of those instruments necessitated a huge supply of optical filters, and Chroma had the expertise and the industry contacts to exploit that demand. In its first year of operation, the company booked $318,000 in sales. In its second year, the number rose to $1.3 million.

"We were shocked," Millman remembers. "And people called. They contacted us because they heard we existed."

Omega Optical's Johnson was also shocked by Chroma's success, but not in a good way. Omega filed a $20 million lawsuit against Chroma in 1995, alleging that Chroma's cofounders had stolen proprietary knowledge — such as customer lists and manufacturing methods — from Omega. Chroma defended itself in court, eventually appealing to the Vermont Supreme Court, and prevailed. The victory cost the company $2.5 million in legal fees.

If the Omega lawsuit hurt Chroma, the company appears to have recovered quickly. In 2003, Chroma spent $3.5 million to move from Brattleboro to a 28,000-square-foot manufacturing facility in Bellows Falls. The building is a few miles north of downtown in an industrial zone. Its neighbors include Sonnax, which makes automotive parts, and the depot for the Current, a bus that runs along Interstate 91. In line with its good wages and profit sharing, Chroma offers a generous benefits package that includes employer-funded health care, flexible work schedules and a 12-week parental leave at 60 percent of regular pay.

The entire picture was enough to lure Jennifer Jones, 32, from her job at Corning Specialty Materials in nearby Keene, N.H. Jones is one of three process engineers Chroma has hired in the past two years. Their job is to take stock of current processes and standards and improve their consistency and quality.

"I really liked Chroma's work-life-balance commitment," she says. "They appreciate and understand that people have lives outside of work, so it made a lot of sense for me, as a single parent, to work here." Jones also likes that Chroma's filters are used in equipment that helps cure cancer. "The products we make help people," she notes.

That work will only accelerate once the $11 million expansion is complete. Chroma is feeling pressure from its customers to produce more filters at lower costs, Millman says, so the new facility will contain modern equipment that can coat large quantities of glass filters simultaneously without compromising precision. The new building will also feature a wellness center with a gym and meditation space, more meeting rooms, and a larger kitchen and dining room.

Ahead of the expansion, Chroma has gotten into a new habit. Every week, Millman and a few other of the company's senior executives go to lunch with six or seven employees to talk about whatever's on their minds. They frequent Popolo, the only full-service restaurant in Bellows Falls.

During a recent lunch meeting there with employees from several departments — and a reporter for Seven Days — Millman looks a little worried as he discusses competition from China and the need to reduce costs through automation. Chinese firms are getting really good at producing mass quantities of small filters, he says, and Chroma has to adapt to survive.

One thing Chroma won't change, however, is the same quality that hooked Warshaw back in the 1990s: personal attention to its clients, with which the company becomes almost a research partner. At first, Warsaw says, he thought he was receiving special treatment because he was a fellow Vermonter. Over time, he learned that scientists around the world got the same care from Millman and Chroma's application engineers.

"Customer service is our trade secret," Millman says. "It can overcome a lot of faults, and we're the best at it."