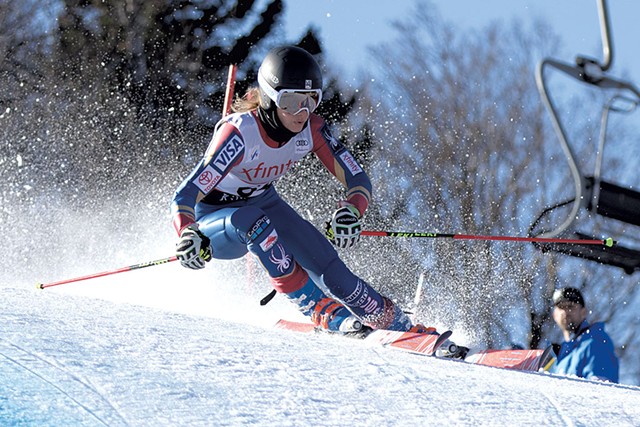 All Resi Stiegler wants for her birthday is a few good finishes. The World Cup alpine skier turned 33 on Wednesday, November 14. Barring any unforeseen catastrophes, she plans to crush the slalom in the women's alpine competition at the Audi FIS Ski World Cup at Killington Resort next weekend, November 23 through 25. The only event of its kind on the East Coast, that race is inspiring plenty of prep in Vermont and beyond.

While three-time Olympian Stiegler intends to compete in her ninth career World Ski Championships in Sweden in February, she's well aware that it's a long road from here to there.

Stiegler, a Wyoming native and the daughter of Olympic champion Josef "Pepi" Stiegler, debuted on the World Cup circuit in 2003 at age 17. She returned to snow this fall after a race-day crash during the 2018 Winter Olympic Games dashed her dreams of gold and landed her on the disabled list for the rest of last season. That crash was the latest in a career frequently paused by injuries ranging from broken bones to blown-out knees. 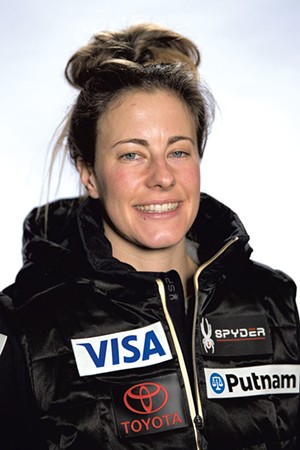 In a conversation with Seven Days last week, the racer was candid about recalibrating her mind-set in an industry where winning is everything. This time around, she said, coming back is about "knowing that you're trying to accomplish one or two more things and making the journey the most important part of it all."

In the interview, she also offered insights on surrendering control, on-the-road crafting and the best life-giving chocolates.

SEVEN DAYS: The 2018-19 season is just the latest of several comebacks for you. What's different this time around?

RESI STIEGLER: I think I just have to be honest about being older. My career didn't go exactly as I'd planned, but I'm trying to inspire people and trying to continue getting what I want out of skiing.

Last year, I put everything on the line for [the Olympics]. I worked harder than I ever had before, and to get hurt on [race] day was unbelievably difficult. So I'm taking a little of a "less is more" strategy, because sometimes you have to let things go. When you've worked so hard and didn't get the results you wanted, you just have to accept some things. It's not giving up in any sense, but you don't have to put yourself under that pressure of getting that result.

SD: With any speed sport, there's a fine line between riding the raggedy edge of control to victory and crashing to a non-finish. How do you handle that line?

RS: That is one of my biggest problems of late. I have OCD, which doesn't help. At some point in the past 10 years, I started to control every single [turn] to an extreme. But when you control things like that, you're slowing yourself down. So I've done mental training, and I've been working with an amazing coach. You have to be OK with crashing — you should almost try to crash. Holding on to every turn is unrealistic. Skiing is always about flow and letting go of control; that's the fun and the speed of it. I'd like to say I've gotten past that, but it's difficult.

SD: What's your favorite food to fuel a day of skiing?

RS: I have celiac disease, so we're always so lucky if we have a chef around [to accommodate that]. I had to get into cooking because of my allergy, and I'm a pasta fanatic, so I always travel with [gluten-free] pasta so I can get that comfort food. I'm a carbonara freak. But I do eat quite healthy; you have to as a competitive athlete these days.

SD: Most skiers I know carry "pocket candy" or snacks to eat on the lift. Do the pros do that, too?

RS: Oh, yeah. We definitely do. We have ProBars and RXBars — they have so many bars now — and drinks we can take out on the hill. And I love chocolate. Justin's [nut butter company] makes these little "butter cups" with organic almond butter and dark chocolate. Oh, my God, those are fantastic.

SD: What inspires you most about being a pro athlete?

RS: There are so many little details [that go into making] a turn. There's this wild obsession with perfecting the turn. It's the weirdest thing to tell someone outside of skiing, because it's just such a simple little thing. But we're skiing at high speed, on ice, with these little steel edges. So you have to connect your mind to your feet.

And of course it's like, How have I not perfected this damn turn?! I love the challenge of that. You're constantly trying to make it faster and more efficient, and you go back and watch the [training] video, and you can see, OK, I wasn't good in this section of the course, so I need to do something different in the gym. When it all comes together in a success, it feels so good.

SD: What are some of your off-slope interests?

RS: We travel so much that I've gotten into things you can do on the road. I love reading and studying things and podcasts. Photography and writing are great outlets mentally. I bring paints out on the road. My team has been awesome. Every person is into something different, and we have a "creative hour" where we bring beads and make necklaces and things. We like to use our brains a little more than people would probably imagine.

SD: Any simple advice for weekend-warrior skiers who want to improve their turns?

RS: If you can update some [of your equipment] and make your experience more comfortable, I think that would be the biggest thing. People are out there on these [old] skis and boots, and they're cold and their feet hurt. If you want to enjoy skiing and be better at it, you do have to update. I know gear is expensive, but there are so many outlets now; you can get some new things without spending a fortune.

SD: As a westerner, what can you say about skiing the East?

RS: I love Killington. People warn you before you go that it's going to be cold and rainy and miserable, but every time I've gone it's been so nice. And the people [in town] have been so incredible and so nice. I met this woman [Liz Patnode] — her business is called Truenorth Juice, and she just came out of the woods and has blessed me with amazing juice and food all these years that I've been racing at Killington. The Vermont ski-town community has been so loving and generous.

On the weekend after Thanksgiving, 75 of the fastest female ski racers in the world will hurl themselves down Killington Resort's Superstar trail at speeds of up to 60 miles per hour. The person in charge of the snow conditions under their feet is Gareth Trayner, the chief of course for the East Coast's only Audi FIS Ski World Cup race.

"The most critical part of a World Cup ski race is the surface on which we ask the athletes to compete," Trayner says. "Ideally, it's as firm as possible."

When Trayner talks about firm snow, he really means ice. The surface for last year's World Cup course in Killington was so hard you could drive a Zamboni on it. It was crafted to such translucent perfection that the tip of a drill bit sunk eight inches down was still visible. No one dared travel across the trail with anything less aggressive than freshly tuned race skis or crampons.

To Trayner, it was a thing of beauty. But, like manufacturing other kinds of beauty, imbuing the black diamond-rated Superstar with diamond-like perfection takes hard work.

For one thing, the average snowfall in November in Killington is 29 inches. But a World Cup course needs to be packed at least a meter deep (39.37 inches) with dense snow. That means Trayner leans heavily on the resort's experienced snowmakers, who start blanketing the 1,000-meter slope as much as a month in advance.

The next step is a grooming project of monumental proportions. Three or four snowcats piloted by Killington's expert groomers prowl the slope for days, pushing the snow around and building side hills, rolls and off-camber turns.

With the basic shape of the course in place, Trayner and his volunteers begin the painstaking process of turning the slope into a tilted ice cube. First, a team of about 20 people wielding snow-gun hoses walks side by side down the entire run, dousing it with water. It takes all day. Then the groomers come back out and pack the wet snow down to a smooth surface, which is left to freeze.

Once the slope is firm enough, a more precise watering phase begins. Now the volunteers use aluminum injection bars that shoot a jet of water at 160 psi and penetrate eight to 10 inches into the snow. The crew is spread across the entire trail, moving downhill in eight-inch increments for another full day.

When all that work is done, Trayner just hopes the waterlogged slope freezes slowly, "so it draws the air out and you end up with a far more dense product," he says.

Like a giant inclined skating rink, a good course can hold up to a lot of abuse. And that's the point.

On their first run, the skiers are launched in number order. The winner of that run goes last in the second run, meaning she'll hit the course at its most worn down and chewed up. Since the skier with the shortest combined time wins, ensuring a durable surface is key.

"We don't want the surface to dictate who wins," Trayner says. "It should be the skier who navigates the course most efficiently."

The original print version of this article was headlined "Comeback Kid"