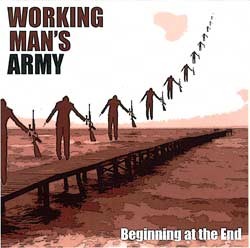 After more than five years of yeoman-like efforts in and around the Burlington club scene, Working Man’s Army have finally released their debut album, Beginning at the End. At times an unwieldy mélange of styles and influences, the album straddles the fine line between nascent potential and unrealized promise.

Following a short mashup-esque intro, the disc gets under way in earnest with the nü-metal-tinged “Two Face.” Driven by Mike Labita’s plodding drums, a wall of sludgy guitars frame vocalist Ian Greenman’s dynamic delivery. Particularly in the song’s early moments, he reasonably evokes a young Ozzy, which is certainly not a bad thing. Sonically, imagine — potential sacrilege alert! — a blend of Surfer Rosa-era Pixies and Staind or maybe System of a Down and you’re not terribly far off the mark. The song features a nifty bridge that illustrates the band’s greatest strength: composition. However, the moments leading up to that bridge also highlight the disc’s fatal flaw as Greenman offers this nugget, “But you’re so precious, how you try / All intentions, full of pride / and so softy you doth cry.” Note to aspiring songwriters: using Ye Olde English doesn’t lend your words added weight or earnestness. Alas, quite the opposite.

As they do throughout the disc, Working Man’s Army switch gears with the next track, “Day to Day.” The tune has a pleasant, swinging pop feel, and features numerous inventive changes and a subtly gnarly bridge. Again, Greenman displays an impressive vocal range, this time revealing an obvious Sublime affinity. But his words fail him. “We live our lives, and we live until we die,” he sings. Good to know.

The title track follows and the band takes yet another sonic detour, this time into funky speed-metal territory. At the bridge — again, the arrangements throughout are remarkable — Greenman delivers a soaring melody with a pretty, fractured tone over a stirring symphony of strings and synths. He also mystifyingly cops a faux British accent. See the “Ye Olde English” comment above for clarification on why this doesn’t work.

The disc features a couple of acoustic numbers amid the din of nü-metal crunch. Much like the louder tunes, the band’s softer moments are buoyed by spirited arrangements and pleasing melodic turns. But they are similarly weighed down by mincing wordplay. “’Cuz that’s the key to happiness / And the key to mutual bliss / And if you are smart you will listen to those voices in your head,” Greenman sings — with healthy stylistic nods to Sublime’s Brad Nowell — on “Little Ego.” By the way, said “key to happiness” is asking yourself, “Why?”