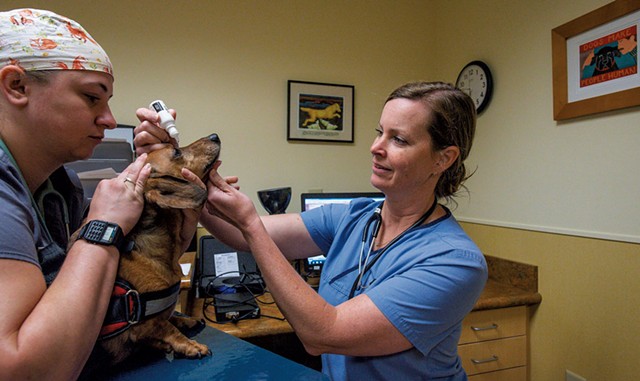 Hoy, 43, owns Vermont Veterinary Eye Care — the state's only veterinary practice focused exclusively on ophthalmology — located in the Peak Veterinary Referral Center in Williston. Eyes are her forte, but she said ocular problems can point to more widespread maladies.

"I end up diagnosing a lot of systemic diseases from things that I find inside the eyes," she said, "and you can end up saving lives from doing that." Hoy can sometimes detect blastomycosis, for example, a fungal infection that, if undiagnosed and untreated, can cause blindness and death.

Dogs comprise about 70 percent of Hoy's clientele, and cats, 20 percent. The other 10 percent are a menagerie of species, including about one horse a week.

"When I got into vet school, I was thinking I might actually want to be a horse vet," she said. "But then I found that that lifestyle wasn't quite going to work out for me, because you spend a lot of time on the road, driving from farm to farm. I don't travel well, and there are a lot of middle-of-the-night calls."

In vet school, Hoy discovered the joys of her current specialty. Since all animals have eyes, veterinary ophthalmologists see animals from many species, both for routine checkups and for surgeries.

Operating on small animals such as hedgehogs, who have some of the tiniest eyes Hoy's seen, requires scrupulous dexterity.

"You can't have a shaky hand," she said, chuckling.

Veterinary ophthalmology was a niche not yet filled in Vermont when Hoy opened her practice in 2009. For the Burlington-born, Essex-raised vet — who has lived in 10 different states — the move back to the Green Mountains was both a good professional decision and a homecoming.

Hoy spoke with Seven Days about remarkable cases, differences between species and her favorite parts of the job. (The interview was condensed and lightly edited.)

SEVEN DAYS: What are some of the more uncommon animals you see?

SARAH HOY: I saw three rabbits in one day this week, which was interesting because our rabbit caseload is very sporadic.

I've seen all kind of things. I've done corneal surgery on a parrot that lived in Stowe. We were once presented with a white tree frog from the ECHO Leahy Center for Lake Champlain. And I was really blessed to get to examine a bald eagle one time, who was brought in by a handler.

When I was in Minnesota, I actually got to do surgery on a sand shark at the Minnesota Zoo.

SD: Oh, my goodness! Can you tell me about that surgery?

SH: He unfortunately had an infection in the eye and just needed to have the eye removed. But it was very exciting — he was probably about a five-foot-long shark.

They brought him in a portable tank and put the anesthetic chemical into the water. He was floating belly up, that's how you knew he was asleep. And then we slid his whole body up onto a ramp and had a hose with running water running over the gills, with the anesthetic in it to keep him asleep and oxygenated out of the water.

SD: When you see an animal from a new species, are there certain guidebooks or tutorials you go to for reference?

SH: There's a general similarity to the anatomic structure of the eye across species, but there are some very important differences between species. For example, I see a lot of owls, because we'll have a lot of wildlife rehabilitators bring in owls that were hit by cars. And owls and certain birds have bones in their eyes, for extra stability when they're diving at high speeds.

SD: Is it difficult to work around the bones?

SH: No, it can actually be very helpful. Because if you're cutting into a dog eye, for example, to do a cataract surgery, the eye wants to deflate like a water balloon. But if you do surgery on an owl eye, it stays rigid.

SD: Do you see more of a certain type of animal in Vermont?

SH: I would say that if I were in Minnesota or down by Boston — wherever there's a zoo — I might see more exotic animals. But in Vermont I get to see more wildlife.

SD: How do your partnerships with wildlife rehabilitators work?

SH: The wildlife work is all nonprofit, and it's really just for fun and to give back. We love to work with the wildlife species and work with rescue animals from humane societies, too.

SD: Recently, the Humane Society of Chittenden County posted about a surgery you did on cats whose eyelids never formed.

SH: Yes! That was a pretty lengthy surgery, about an hour per eye. That's an interesting one, where I actually transposed the corner of the mouth up to create a new upper eyelid. And those kitties are doing great.

SD: What are some of your favorite things about working with animals?

SH: I think there are several facets to my job. There's the technical aspect of it, but I think that truly my favorite part of the job is actually interacting not only with the patients but with the clients.

Probably my favorite appointments are when I interact with my elderly clients, and I get to see the impact that the pet has on the client's quality of life. And that just really gets me.

The original print version of this article was headlined "Eagle Eye"