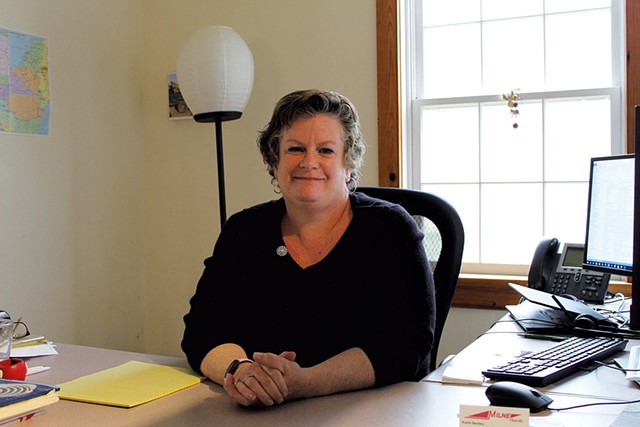 Robin Bentley has the kind of voice you want on the other end of the phone in a travel emergency. Both soothing and bubbling with enthusiasm, hers is the voice of someone who has coached scores of clients through travel highs and lows, from the excitement of booking a trip to the letdown of nor'easter-induced flight cancellations.

Last month, Bentley helped a customer rebook a flight from a closed airport in Caracas, Venezuela. When the woman arrived in Middlebury, she came into the office and gave Bentley a big hug.

"There are times like that when it is really rewarding to help people," she said.

Bentley, 52, is a travel adviser for Milne Travel, a Barre-born travel agency with locations all over New England. She's been working at the company's Middlebury office, housed in a small, shingled building on Washington Street, for more than 22 years and is now the branch's manager. She's worked in the travel industry since she graduated from college in 1986.

Back then, Bentley didn't have a computer at work, or voicemail. Now, she has two monitors on her desk; software shows her when staff from each Milne branch are available to talk.

"In terms of change, oh, my gosh," she said with a chuckle. "I'm laughing because we had books that had airline schedules in them, called an OAG. We would look up the schedules and call the airline and write out the ticket. And if we made a mistake on the ticket, we'd have to void it and start all over again."

It seems only natural that travel agencies would have lost traction in Bentley's three-plus decades in the industry — that Travelocity, Expedia and TripAdvisor would have done to local companies what Amazon did to mom-and-pop bookstores.

But Bentley told Seven Days that these new travel tools haven't replaced her work. And the new ease of booking flights and hotels has helped her and her colleagues, too.

SEVEN DAYS: Since you've been in the business, how has it changed?

ROBIN BENTLEY: Automation has been huge over the last 25 years. It's really helped us do our job better and be more efficient and give customers more accurate information.

When the internet first came, we were not sure what to think. We thought, Oh, this is the end. Will people still come to us? We embrace it now because there's a lot of great information out there, but people want an expert. They think, OK, I know Robin's been to Africa; I'm going to talk to her. Maybe they'll come in and ask for Italy, and Terry's been to Italy many, many times. Her family's from there. So she can give them more details than they could get from most guides.

I think over the last few years we've seen 30-year-olds who will say, "I don't even know what a travel adviser does. How does it work?" And we love those customers, because we can really wow them with our knowledge. I think people are coming back.

SD: How do you generate that wealth of knowledge?

RB: If I don't know it, my colleague might, and we have this whole network of other advisers that can share their information.

We've also got a lot of online reference books that are just for the travel agency. And if I've been to a particular place, I can speak to what it's like in detail. We get some opportunities to travel for free, called familiarization trips, and they're exclusively for travel agents. Two years ago I went to Portugal, and I had never been. And we stopped in the Azores. Then, the next year, I was able to sell a trip to the Azores, 'cause somebody wanted to go there, and it's such an unusual place. I had read about it, but when you've been there, it's different. You can talk the talk.

There used to be, back when I started, travel schools.

SD: Did you go to one of the travel schools?

RB: I went to a college, actually, and got an associate degree in travel.

RB: Oh, my gosh, they were great. You talk about hitting something right and it really sparking your interest. We had a geography course, because you had to learn about geography. And we had a computer course, 'cause our computer was different. Now we've got an overlay system, but back when I started, you had to learn city [airport] codes. That was the test: You'd have to learn the codes.

SD: Do you remember most of them?

RB: Yes. And every once in a while, when I get an odd one, it's back there someplace. It'll just come out of nowhere.

SD: What's an obscure one that you remember?

SD: What's that one?

There's no rhyme or reason, right? Like, San Francisco's SFO. You can see that. LA, LAX. Miami, MIA. I will bore you.

Kansas City was another one. MCI. That was a weird one.

SD: Do you ever miss the way things were before they were automated? Or are you happy with how things are now?

RB: No, I love it. I haven't thought about the OAG in probably 20 years. It was just like dinosaur age. We spent so much time calling airlines and being on hold and looking for basic information.

So it's made it easier in a way. Yeah, automation has been great. I think it's really made our job what it is today.

The original print version of this article was headlined "Memory Maker"