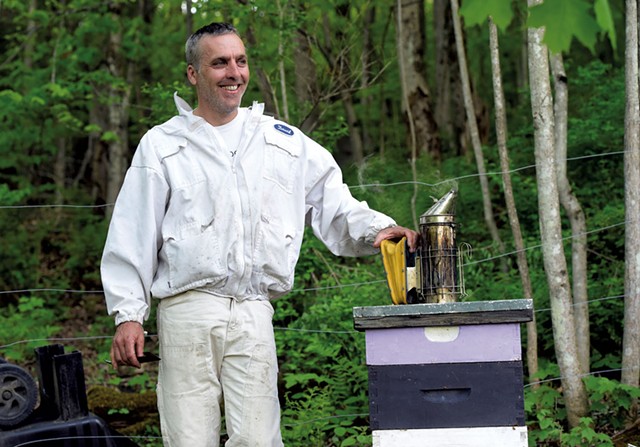 David Tremblay is really humming this time of year. The Vermont state apiarist and bee inspector is traveling the state inspecting bee colonies for signs of diseases, mites and other infestations that can devastate Vermont's bee population. Some arrive on nucleus bee colonies, or "nukes," brought in for sale. Others are carried on beekeepers' hives that overwintered down south and are returning for the spring.

This time of year, bees are doing more than producing $1.5 million worth of honey and honey-related products annually. They're also helping to pollinate an estimated $34 million worth of Vermont crops, including apples, blueberries, pumpkins, and other fruits and vegetables.

Tremblay, who's a beekeeper himself, has been doing this work for three years for the Vermont Agency of Agriculture, Food & Markets. Previously, the 54-year-old Massachusetts native spent 27 years in pesticide law enforcement, ensuring that applicators were using only legally permissible chemicals and doing so safely.

According to Tremblay, the Champlain Valley is among the best places in the world to keep bees, largely because the forage is so diverse and abundant. However, the bees' landscape has suffered somewhat in recent years, as dandelion- and wildflower-filled pastures have been replaced by cornfields.

"A bee gets nothing out of a cornfield," he added. "Corn is really killing it."

In more ways than one. Modern corn production often involves the use of neonicotinoids, or "neonics," a family of pesticides linked to declining bee populations and colony collapse disorder.

As a state employee, Tremblay declined to comment on neonics but noted that they're now present in about 99 percent of the corn seed planted in Vermont. The pesticides then find their way into the plant, pollen, silage and waters surrounding cornfields.

With about 800 registered beekeepers in Vermont keeping 12,000 hives at 1,200 locations, Tremblay said that he and his two seasonal helpers will be as busy as the bees for the next few months. And those are just the registered beekeepers they know about. Many are unregistered, he noted, "which is not helping the situation.

"So, if you're buying bees," he added, "definitely register, and ask for proof that they've been inspected."

SEVEN DAYS: What do you look for during a bee inspection?

DAVID TREMBLAY: There's a bacterial disease called American foulbrood — foul because it smells like death — that creates a spore that's viable for 60 years that cannot be destroyed except by fire.

SD: Where does it come from?

DT: People buy used [beekeeping] equipment and it'll be on that. Or bees can give it to other bees. It only affects the larvae, not the adults, but the adults can spread it. Because you have to burn your equipment when you get it, it can be very hard on the beekeeper.

DT: What happens is, the babies rot in a manner that's very unique. There are various signs and symptoms, and the behavior in the hive will change. When I see something I'm suspicious of, I'll collect a sample and send it to a USDA lab down in Beltsville, Md., where they do a confirmation test. That's about a two-week turnaround. But if I'm 90 percent sure [it's infested] and the beekeeper agrees, we just go ahead and destroy that hive or quarantine it.

DT: I think we're doing pretty well. We don't have bees that go to [pollinating] almonds. Half the bees in the country go to almonds, and when you take half the bees in the United States and put them in one place, it's like taking all the college kids and sending them to Fort Lauderdale for spring break.

SD: Meaning they come back with diseases?

DT: Birds and the bees, man!

SD: Are more Vermonters getting into beekeeping?

DT: Bees and chickens are two animals that people assume they can just buy and it's going to be easy. There's much more to it — and there's even more to bees than chickens. It's an animal and a superorganism and you're putting it in a box, but you can't just leave it there and expect it's going to live. The mite situation is getting really, really bad. These large bee mites — called Varroa destructor — vector 12 different viruses. It used to be that you could get away without treating for them. Now, you definitely have to take active measures.

SD: Do you ever rescue wild honeybees?

DT: Not really. Normally, I get these calls when they're living in someone's house and it requires a carpenter and scaffolding and it's a big project. And you cannot leave those bees in your house, because there's going to be 300 pounds of honey and 20 pounds of bees, and if you kill them inside, it's going to smell like a dead animal.

SD: Does bees' behavior vary much?

DT: For me, it's hard because I'm looking at lots of different people's bees. If I know the beekeeper, I can usually guess [how they'll behave]. Some people think they shouldn't use smoke or are very careful with theirs. Or, a bear got into them. So, you don't always know how mean the bees are going to be. But I'm always ready for that potential. Some days I don't have to wear gloves and a bee suit, which is nice.