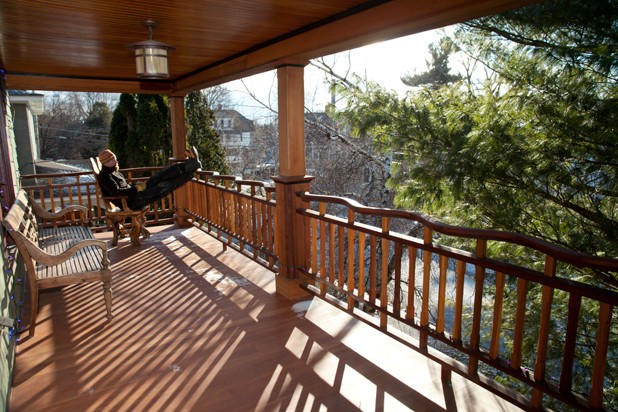 The bumper sticker on Nate Plasha’s pickup truck — “Listen to Shostakovich” — suggests he has interests apart from his work as a home builder and restorer.

Sure enough, Plasha, 36, is “a big lifelong reader” with an English lit degree from Penn State. He plays “atmospheric black metal” guitar in addition to being a fan of modernist music, and has worked as a swimming instructor and sous chef. It was the frenzied pace of that latter occupation — at restaurants such as Stone Soup in Burlington and Starry Night Café in Ferrisburgh — that prompted Plasha to learn a new trade.

He and his business partner, Sean Plasse, started Black Locust Craftsmen a few years ago and have developed a specialty of refurbishing the front porches of historic homes in Burlington. They’ve completed a half dozen of those projects in the past couple of years. The success of their two-man company stems mainly from the quality of the restorations they carry out, but sawing, hammering and displaying a handmade wooden business sign within full view of passersby has also helped them land job after job.

Plasha and Plasse — “great name combo,” Plasha notes — were rebuilding a three-story porch on a Howard Street home one recent arctic morning when the red-bearded, 6-foot-5-inch Plasha eagerly agreed to pause for an interview. He suggested we talk inside a nearby home, on South Winooski Avenue, with a porch the craftsmen had also recently remade.

They installed curved railings of red balau, a tropical hardwood, and used western red cedar for the balusters. The result is a handsome new porch that’s consistent with the home’s historical style but has too much panache to be mistaken for a reproduction.

SEVEN DAYS: Pretty cold, eh? How can you work outside on days like this?

NATE PLASHA: I put hand warmers in my gloves and wear lots of layers, but it can still get really bitter. It’s actually kind of ironic for me to be doing this; I’d been framing houses in the winter for a builder for five or six years, and that’s what inspired me to go out on my own — and get out of the cold. My best-case scenario is to be building furniture indoors during the winter.

SD: This is a great-looking porch. Did it take a long time to build?

NP: There were two months of just talking with the client about what he wanted and going through the design process, which included making models in pine. The actual construction took about three months.

NP: This was actually an ideal job for me. I love doing historic projects and collaborating with clients. I take their needs and filter them through reality while giving the job my own creative twist. You’ve got to deal with issues like durability and the city’s building code.

There can be conflicts when Planning and Zoning wants to keep something looking the way it did and at the same time have it meet modern standards. We specialize in doing that. It’s a niche we’ve sort of fallen into, which I do like a lot.

SD: What appeals to you about it?

NP: I’m from a western Pennsylvania family with a blue-collar mother and a white-collar father. This work seems like a happy medium between those two.

I have four siblings, and as a kid I was always building private spaces. What I’m doing now is also an extension of that.

I homed in on porches because they’re a middle ground between the public and private spheres.

SD: You taught yourself?

NP: After I decided to stop being a cook, I got a job with Birdseye [Building Company] construction, where I learned a lot but also realized I needed to get a more rounded education in building.

I answered an ad on Craigslist for a homeowner in the Old North End who was looking for help rebuilding an 1860s house. It was an incredible experience. I learned to do everything — putting in a foundation, electrical wiring, plumbing, windows, staircases, kitchen cabinets. I spent five years working on jobs with this guy, Sean Laughlin, who’s an excellent builder.

SD: You’ve also developed a distinctive style. How would you describe it?

NP: It’s a mix. I like the Adirondacks look a lot, but I wouldn’t say that’s what I do. I pull details from different historical periods and reincorporate them. It’s not one thing: not arts and crafts, not art nouveau, not modernism, though each of those appeals to me. I’m not stuck in any particular time frame.

SD: What’s next for Black Locust? Do you want to get bigger?

NP: We like being small. There’s this sense of ownership, of being in charge and also of being responsible for everything. We can also decide not to work when the weather really craps out. And having employees can be a bear in terms of regulations.

SD: Do you see yourself doing this when you’re 60?

NP: No. I don’t want to be broken by this. That’s another reason why I think about furniture making. It’s a lot easier on the body.