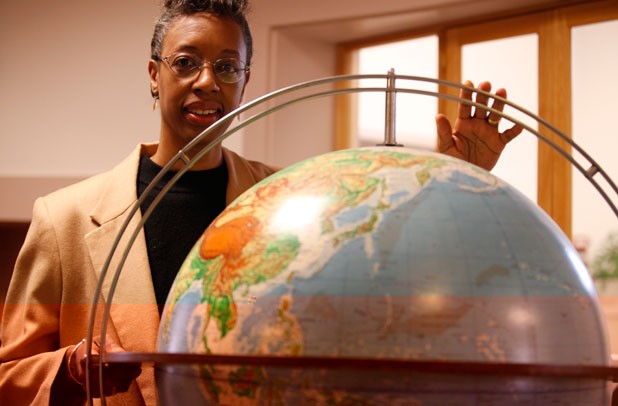 “Get into an elevator, and what does everyone start talking about?” asks Lesley-Ann Dupigny-Giroux, a University of Vermont associate professor of geography. “The weather. It’s something that’s always on our minds.”

Maybe so, but for most of us, that means checking the WeatherBug app on our iPhone, which is nothing like the kind of data crunching that Dupigny-Giroux does as the official climatologist for the state of Vermont. She’s held that post concurrently with her professorship at UVM for the past 16 years, teaching students about weather and climate while using data collected from satellites and weather stations to research climate patterns.

Originally from Trinidad, Dupigny-Giroux received her PhD from McGill University in 1996, but the data she tracks go back many years prior. “As a climatologist, a decade is just starting to become a significant time frame,” she says. “Looking at only two years is only seeing part of the story. It’s like a 500-piece jigsaw puzzle; if you only put together the first 100 pieces, you never complete the picture.”

Seven Days wanted the dirt on just how much trouble lies ahead from global warming, but that subject is just one of Dupigny-Giroux’s concerns. While she does track global trends, the majority of her data collection is specifically related to Vermont, and she works closely with colleagues at state agencies to better quantify the impacts of severe weather on local landscapes. Whether you’re a backyard gardener or a homeowner in a floodplain, you’ve likely benefited from Dupigny-Giroux’s work.

LESLEY-ANN DUPIGNY-GIROUX: It goes back to a love of the environment. I was always drawn by what the sky was doing and why. When I flew, I had to have the window seat so I could take cloud pictures — and I still do! I’m constantly wondering what the air is doing, or why there’s precipitation here and not there. [My job] allows me to answer those kinds of questions.

SD: Who benefits from access to long-term climate data collection?

LDG: I give a lot of presentations to groups around the region who are directly affected by weather. So I might speak at an organic-farmers conference, or to a group of engineers or city planners. I absolutely love doing stuff like that, because it expands my knowledge base. I can explain data from a temperature graph or rainfall chart and then ask farmers to tell me what that means to them on the ground. That brings a new dimension to the data.

SD: How can the collection of climate data help people?

LDG: Well, as a climatologist, I have access to the long-term patterns that have emerged over the years. If you can share data that show the fall months are getting wetter, then a farmer who has access to that information might change what he’s doing in September and October to adjust.

SD: Vermonters are generally pretty plugged into climate and the weather; do you think your job is made easier by living in Vermont?

LDG: A few years will go by when it’s pretty quiet, and then we’ll get a couple of years of weird weather and people will be knocking down my door looking for more information. Several years ago, I received a lot of requests from people who lived on the shores of Lake Champlain asking if the lake was going to get lower. We were in the middle of a drought then. But just a few years later, we were dealing with flood levels. Homeowners, farmers and lawyers are among those I hear from often.

SD: What do you wish people knew about the climate and how it relates to global warming?

LDG: That the climate is part of a large system that is not necessarily linear. There are many interconnected parts and so much information is required to fully understand the changes that are being observed. If you look at Vermont 50 years ago, you see that the ’60s were a cold and dry decade. So you’ll see pronounced warming from then to today. I’m working with a student to take that weather record back to the 1800s so we can see decades’ worth of data. That’s when you get a better understanding of the changes you’re seeing.

The original print version of this article was titled "Weathering Heights"