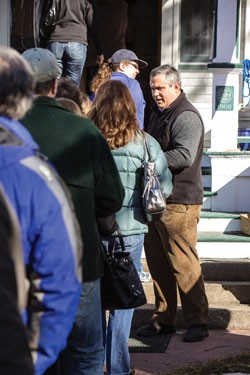 When the owners of a 5000-square-foot family home decide to downsize, where does all the stuff go? That’s a question Kyle Scanlon is well qualified to answer as he readies a stately Victorian in Burlington’s Hill Section for a tag sale.

Scanlon, 43, co-owns K.C. Scanlon: Vermont Estate Sales & Transition Services with his wife, Amie. Together they work with homeowners or their heirs to empty out full houses, selling the possessions they can and donating or disposing of the rest. The Scanlons founded the business in 2007 and went full time once they hit 26 annual sales, in 2011. Last year, they held nearly 70.

About the Victorian Scanlon says, “At this sale, we’ll have about 150 people lined up. We’ll have people getting here at about three-thirty in the morning … Think of Black Friday, but with only one sample of each item.”

Among the items he expects to go fast are a Victorian beveled-glass mirror and the home’s original iron mailbox. Scanlon knows how to spot the treasures: A third-generation antique dealer, he spent a decade working as an appraiser at Williston’s Duane Merrill & Company.

Unlike the auction business, K.C. Scanlon doesn’t stick to high-ticket items. “We sell Prada; we sell Gucci, Louis Vuitton,” Scanlon says. “And then we sell plenty of $1 bobbleheads, too. Anything you could want, we’ve sold or will sell” — totaling 80 to 90 percent of the average home’s contents.

The Scanlons’ commission varies with those contents, “anywhere from 25 to 40 percent,” he says. After an initial evaluation, the couple present clients with a total sale estimate and commission rate, then get to work prepping the home and spreading the word.

Their business requires a lot of people skills, Scanlon says, from dealing with grieving relatives to building a following of buyers. The cutthroat competition of first-come, first-served tag sales isn’t for everyone, but some people wouldn’t miss them.

Seven Days followed Scanlon through the house to find out how one person’s extra baggage becomes another’s treasure.

SEVEN DAYS: How do you set up a sale like this?

KYLE SCANLON: Our first step is what we call “desliming.” It’s taking the everyday household stuff out of the house that might detract … the magazines everybody has, that kind of stuff. Usually when we come to a house, the family members have gone through and taken what they want, so we have to do some rearranging. We pull things out of drawers; we put them out on tables; we sort through silver.

SD: What was the largest home you handled? The smallest?

SD: How do you decide whether to include valuable antiques in the tag sale or refer the client to a dealer?

KS: It’s a matter of what’s popular on the markets right now. When we don’t know what the true cap [on the value of an item] is, that should go to auction.

SD: What’s the most valuable or unusual item you’ve encountered?

KS: This summer I found $6000 in cash in a couch, in an envelope. That was a fun thing. I was by myself, and I was moving the couch to throw it out, actually.

SD: You prefer not to have the owners present at a sale. Why?

KS: Honestly, I have never seen a seller help a sale. If I have a daughter or son there crying because they’re selling grandma’s photo, that’s not going to help my sale at all.

SD: How do you handle a house that hasn’t been cleaned out in decades?

KS: We joke that our commission rate should go up the more generations have been in the house, because there’s a lot to clean out. But the ones that haven’t been cleaned out in decades are the ones where you find the treasures, too.

Last year we did a sale and the family had been into the house, and they had a dumpster. My daughter and I went to look in the Dumpster, and we started pulling out handfuls of gold jewelry that they’d thrown away. They didn’t know how to deal with it. That happens quite a bit.

SD: What do you do when you see an item you want yourself?

KS: We never buy stuff beforehand at our sales. We just don’t feel that it’s fair to set a price on something and then to buy it.

SD: What’s your favorite part of the job?

The print version of this article was headlined Trash and Treasure".