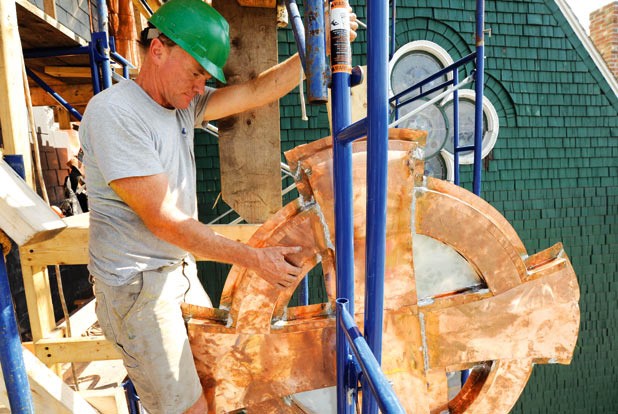 For many, “upward mobility,” “moving up in the world” and “career pinnacle” are mere metaphors. But for Jay Southgate, 54, owner and founder of Southgate Steeplejacks, these are matters of fact. Southgate and his crew of four work exclusively on steeples throughout Vermont, Maine, New Hampshire, New York and Massachusetts.

A “steeplejack” handles every aspect of steeple building and restoration, from engineering and design to shingling and painting. After moving to Vermont in 1988, Southgate spent six years building his business and moving from general construction to strictly steeples. Though the transition took a while, the idea came to him suddenly. One day, Southgate says, he was doing carpentry for a particularly irksome homeowner and happened to look over and see two guys working on a nearby steeple, exchanging a piece of copper. Sunlight reflected off the copper into Southgate’s eyes, and he thought, I want to be doing that.

Fifteen years later, Southgate and his crew have summited the Vermont Statehouse dome and upwards of 130 other steeples. Seven Days stopped in downtown Morrisville to meet Southgate and his employee of 14 years, Josh Sainz, 31, and ask them, “What’s up?”

Seven Days: Josh, how is it possible you’ve worked as a steeplejack for half your life?

Josh Sainz: I was failing at Twinfield [Union School in Plainfield], and they had a Renaissance program, which allowed students to get credit for part-time work … I started working for [Southgate] part-time and getting credit for history and English — Jay had me research the steeples we were working on and write papers about them. After graduation, I just kept on working.

SD: What is a steeple’s function?

SAINZ: One of their historic purposes was to guide the way to town, to attract travelers and settlers who could see it from ridges. Also, putting up a steeple is a way of getting closer to God. And it’s a symbol of wealth — especially with the old, old Congregational churches.

SD: Was there a golden age of steeples?

Jay Southgate: They’re all from about 1830 to 1920. Not many are newer; if they are, they’re fiberglass. You can’t put a steeple up anymore — in Marshfield, they wanted to put one up, and they couldn’t do it because of the zoning restrictions.

SD: What ails the steeples you work on?

SOUTHGATE: Steeples are made of wood. Wood is an organic matter — it weakens with age when it gets wet. You can have a grapefruit-size hole in the spire of the steeple, but what’s worse is when water collects, in the mortices, those critical junctures that hold the structure together — when it’s like a little swimming pool in there, and everything is gooey — that’s really bad.

Also, steeples are hard to get to, so when they need work, they usually need a lot of work. My goal is that nothing that we work on will ever need my attention again, ever, in my lifetime.

SD: Do you work in all weather?

SAINZ: Yes, except lightning. When we worked on a steeple in Montpelier all winter, we had a device rigged up to warm the slate shingles before we sent them up to the steeple, so we didn’t have to wear gloves. We called the device the “Gongulator” [as a joke] — it was an electric heater in a thermal box.

SD: Which town has the most steeples? Where and how high was the highest steeple you’ve worked on?

SAINZ: Vergennes has a lot of steeples — I think we counted seven. The highest steeple was in Rutland, 180 feet up.

SD: What was your weirdest job?

SOUTHGATE: We built a steeple for a chapel at a private residence for a second homeowner in Newark, Vt. In the chapel he kept the urns containing the remains of his prize cattle.

SD: So what are you doing [in Morrisville]?

SOUTHGATE: When this church was sold to the senior center, the town maintained ownership of the [100-foot] steeple — which is common. Towns will often maintain ownership of everything above the building, especially if [like this one] they’ve got a clock. This steeple was hit by lightning in 1931, and they rebuilt it, but they didn’t do such a good job — they didn’t do the copper right. We are replacing every exterior surface, putting on new copper; we straightened it, and we’re making some structural improvements.

SD: What’s the greatest part of your job?

SAINZ: Going to church and getting high.

SOUTHGATE: In addition to the fact that this work keeps me away from homeowners, I like that I am processing more raw materials than prefabricated ones.

SAINZ: The best part of my job is working with copper — because it’s beautiful and challenging; it’s the most agreeable sheet metal.

SD: How has steeplejacking changed?

SAINZ: When they built these steeples, they used oxen to lift up the pieces. They did everything by hand; everything done by hand is better. They used whatever they had — if they had a 36-foot timber, then that’s what they used. And they were crazier — they went up without ropes!

SD: What do you see up there?

SAINZ: It’s the best weather station there is. We see mountains. People on the third story who don’t think people can see them. Car accidents — people looking at you, and then, boom! And you see birds as they fly below you.