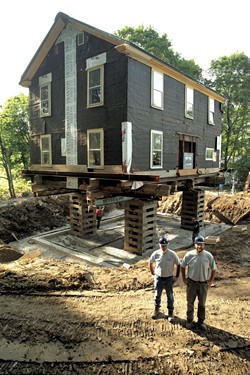 If you've ever seen a Vermont house, barn or camp raised off its foundation, there's a good chance Jason Messier and his family moved it. Messier House Moving & Construction is the state's largest house mover, having jacked up thousands of houses in Vermont, New Hampshire and New York. They've moved everything from small hunting cabins to the University of Vermont's Johnson House, which was relocated in July 2005.

The Messiers don't just move houses. In July 2004, they moved the Lake Champlain Maritime Museum's 1862 replica schooner, Lois McClure, about a mile to launch it in Lake Champlain. They transported Vergennes' historic train station in October 2012.

Messier moves 25 to 50 buildings annually, of which about 80 percent are lifted straight up to install a new foundation. Another 10 to 15 percent get rolled aside or resited elsewhere on the property. Only a few actually travel down a public road.

On a recent sunny day, Messier, 32, was at a "lifting" job on East Road in Colchester. His equipment supported a plank-constructed house, circa 1815, about 10 feet above an open, muddy pit. One of Colchester's oldest homes, the house had been sitting until recently on the original stone foundation, which leaked badly. Rather than tearing it down, the owner decided to preserve its antebellum craftsmanship.

Messier and his crew installed a network of steel beams beneath the house and another around the perimeter — called ledgering — to secure the structure before its rotted sills could be replaced. Once the house was elevated, a new concrete foundation could be poured. The entire process takes about two months.

Messier's grandfather, Joseph, started the business several decades ago. In the company's East Montpelier office hangs a 1935 photo of him standing on a 115-foot extension ladder he built himself to replace the steeple rod on the East Orange Church. When Jason's father, Norman, took over the business in 1974, they still used hand-cranked cranes to pull beams off the trucks and screw jacks to lift houses.

Today, Messier uses far more advanced technology. Inside the wooden cribs supporting the 50-ton Colchester house were hydraulic jacks that worked in unison, lifting the entire structure simultaneously. What took his grandfather three months to accomplish, Messier can do in three days.

While there's no formal training for house movers in Vermont, Messier has been around moving sites since he was 5. For about a year, he worked for the Matyiko family, internationally renowned movers who relocated the Cape Hatteras Lighthouse in 1999 and the 7,400-ton Newark Liberty International Airport terminal in 2001.

Today, Messier said, he's as diligent about maintaining his family's reputation for dealing straight with people as he is about keeping houses level.

"If you're yelling at somebody on our job site, it's only because something's about to hit them," he said. "We've got 40 tons over our heads, so if something goes wrong, it's going to go wrong quickly."

SEVEN DAYS: What's the largest building you ever moved?

SD: How difficult is it moving a house down a road?

JM: Moving the house itself isn't hard. It's all the utility lines, escorts and permitting that gets complicated. If this house were moving on Route 2A, a state road, it would be a $2,000 permit to go across the road. The cost is based on weight, not distance.

SD: What's it cost to jack a house?

JM: It really depends on the project. It can be anywhere from $6,000 to several hundred thousand dollars. Most of our projects are $50,000 or less.

SD: Do homeowners have to empty their house before it's moved?

JM: No. The weight of the materials inside is next to nothing compared to the weight of the house. What we typically ask is that anything fragile or hanging on the walls be taken down. But if you do your job right, the building doesn't know it's off the foundation.

SD: How fast does the house travel?

JM: Typically no faster than a walking pace. Our moving dollies have 50-ton hydraulic jacks in them, and you can keep the building level or use them as shock absorbers. We've gone some pretty wild places with houses. Anywhere you can go with a dump truck, I can take a house.

SD: Ever had one fall off a dolly?

JM: No! We've moved over 2,000 houses over the years and never lost one. I can't remember the last time we did anything more than break sheetrock. We've broken a couple of windows, but that's almost always during a move when we can't get rid of every tree. Going down the road, you can't always get everything out of your way.

The original print version of this article was headlined "Uplifting Work"