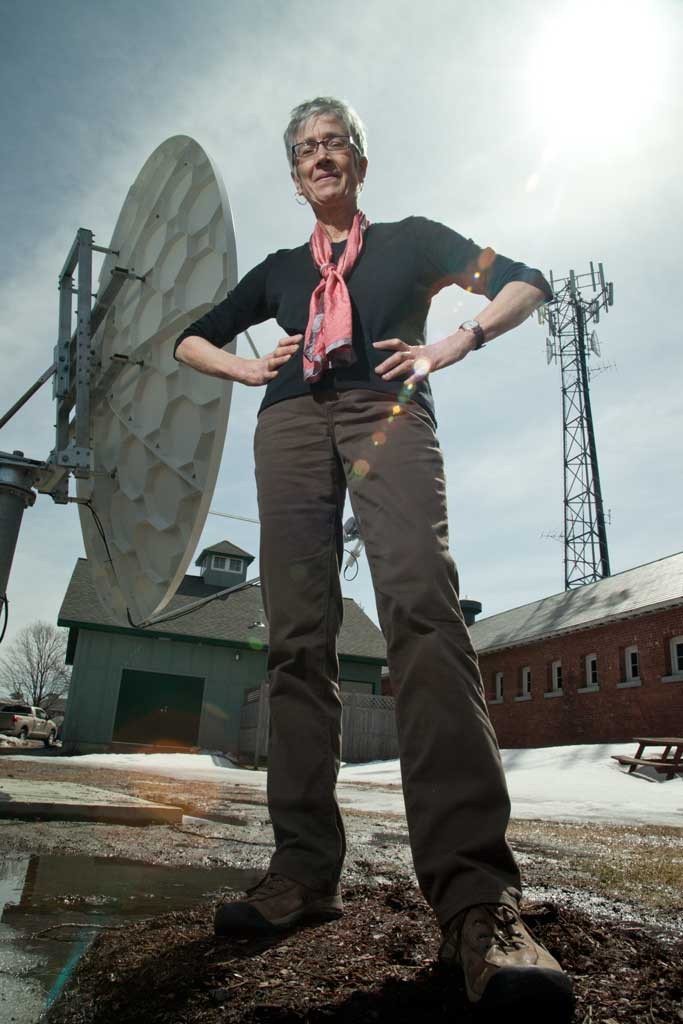 Franny Bastian wasn't exactly a bookworm when she studied at the University of Vermont in the early 1970s. In fact, she admits her grades were terrible.

"I dropped out of school because I spent all my time at the student radio station," she says, referring to WRUV, which in those years broadcast on the AM dial.

But Bastian's preferred pastime, unlike that of many UVM ski bums, led to a career. The fiftysomething Portsmouth, N.H., native spent most of that career in Vermont's commercial radio market — first at WVMT AM-620, then at Burlington's Star 92.9. One day, Bastian heard Vermont Public Radio run an on-air advertisement for a pledge drive producer. "I was like, That's my job," she recalls.

Bastian started out running VPR's three-times-a-year pledge drives and eventually became program director. For the past eight years, she's earned a reputation among coworkers as the station's "pledge drive guru."

For this week's Money Issue, Bastian offers Seven Days a glimpse into how VPR pulls off effective pledge drives — without sounding too needy, greedy or annoying.

SEVEN DAYS: Do VPR staff like pledge drives? Or are they just a pain in the ass?

FRANNY BASTIAN: When I was new, it was like, Oh my goodness! This is sooo huge. And, yes, it is a pain, because you can't do anything else when a pledge drive is going on, and you still have your regular job. But after you've been through a few of them and become more ingrained to how public radio works, that it's listener supported, then [you realize] this is just something we do.

One reason people here like the pledge drives is, they get to work side by side with somebody they otherwise do not [work with] during the rest of the year. So [normally] I see ["Morning Edition" host] Mitch Wertlieb in the hall and say, "Hey, Mitch. I liked that story you did." But for us to spend three hours together on the air each morning talking about our kids, our dogs, the books we read — it's a staff connection that brings people from various departments together.

FB: That's good to hear. It's supposed to sound like that. There are no scripts. We don't write it all out, although in years past, it was very scripted. In fact, down in the basement I found a box of 5-by-7-inch cue cards that people used to use.

SD: Does it take a balancing act to nudge people into giving without pleading?

FB: It's a real turn-off to sound like you're desperate or begging. We'll talk a lot about that balance. There is a real tension there between creating that urgency — "We really have to make our goal of receiving 100 pledges by nine o'clock this morning to receive another $4,000" — [and realizing that] isn't really a strong reason for you to give. A stronger reason is "I was listening last weekend when Terry Gross interviewed such-and-such author. And that costs money, so I'll help."

SD: Are there approaches that just don't work?

FB: While we try to sound conversational and like we're having fun, there's another balance of making sure we don't go overboard. We want to maintain that public radio presence. We want listeners to think of us as real people and to know we have personalities and a sense of humor, but not get silly or goofy.

SD: When you run donor challenges [i.e., when big donors agree to match a dollar amount contingent on receiving a certain number of pledges], do donors still give even if listeners don't pony up enough?

FB: Sometimes what happens is, the [donor] will say, "OK, so you didn't make that goal, but I'll let you give it another shot." We usually have a longstanding relationship with the person, and they'll let us have another try.

SD: Does NPR help with pledge drives — for instance, by altering its programming?

FB: They do that a couple of times a year, but we don't let that determine when our pledge drives are. The other thing they do is provide those audio cuts you hear, like "Hello, I'm [NPR host] Michele Norris..." They'll also provide fundraising versions of some programs, like "Car Talk." So you'll hear them making jokes about giving.

SD: Do any callers stand out in your mind?

FB: The ones that stand out are the college students who are in school halfway across the country, who will email us or make a pledge and say, "NPR is my connection to home" or "I don't make a lot of money, but here you go." And frequently we have [donors] who have some connection to Vermont who are very far away, like on the other side of the world, and they listen online. Those are the ones that when we read them, we go, "Aww."