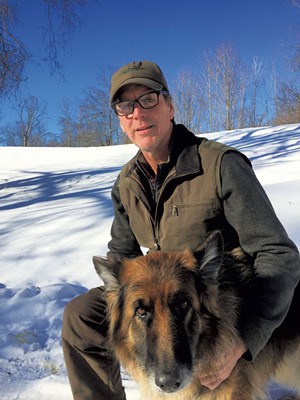 When Pete Kelley retires from the Berlin Selectboard next month after a seven-year run, he'll leave behind an organization that he didn't own or start from scratch. That hasn't been his usual MO.

Kelley is a serial entrepreneur and small-business owner. Like many Vermonters, he said he never gave much thought to the fact that he worked for himself. It's in his DNA: His father was a self-employed home builder.

Kelley, now 63, grew up in Westerly, R.I., the son of World War II veterans; his father fought in Germany, and his mother was in the Women's Reserve of the U.S. Navy. In January 1978, Kelley moved to Vermont, where his father had grown up. Two months later, he and a friend opened their first business: a car wash on Route 302 in Berlin that had previously gone bankrupt.

"We had no idea what we were doing. I didn't even know how to spell car wash," Kelley said, only half-jokingly. "But we opened the doors, and it just went crazy. It was seven days a week, and we washed cars until they stopped coming, sometimes until 10 o'clock at night."

Kelley ran that car wash until around 1992, often voicing live advertisements for the business on Waterbury-based radio station WDEV-FM. He went on to sell motorcycles, boats and airplanes — he still has a pilot's license — and then launched two more car washes.

He recalled the time a particular young man came in looking for work. The 19-year-old had bright-orange hair and wore dangly earrings. Kelley was skeptical but hired him anyway. One day, a customer came to the teen with a complaint. Though Kelley's employee handled the problem correctly, the customer still asked to speak to his boss.

"Afterward, I took him into the shop, stood him in front of the mirror and said, 'That's why he didn't pay any attention to you,'" Kelley recalled. The next day, he said, the employee's hair was brown and trimmed, his earrings were gone, and he looked more professional. In 2008, Kelley sold his two car washes to that same employee. "That's one of my prouder moments," he said.

Always searching for his next business opportunity, Kelley invented a product in 2005 called the Wine Chime Toasting Bar. The decorative, interactive centerpiece lets people clink their glasses by tapping them on a tonal bar rather than reaching awkwardly across a dinner table. Though the product's purpose seemed like a head-scratcher to some, after California celebrity chef Michael Chiarello added it to his NapaStyle catalog, Kelley had trouble keeping up with demand. He continues to make and sell it today.

In January this year, Kelley launched his newest business venture: NoSwear Headwear. The item is a padded ball cap for protecting the wearer from accidental dings while, say, working under the hood of a car or doing a preflight on a small aircraft. In fact, Kelley specifically designed the cap to fit under a pilot's headset.

"It was the build-a-better-mousetrap idea," he explained. And unlike the Wine Chime, he added, "Everyone knows what a hat is."

SEVEN DAYS: Where'd the idea for NoSwear Headwear come from?

PETE KELLEY: In the car wash business, you're always banging your head on something, and what comes out of your mouth you don't want to say in front of your mother. But as you get older you want to stay busy, and selling hats is a whole lot easier than scrubbing bumpers, shoveling mud and running a car wash.

SD: How many times did you bonk your head before the idea came to you?

PK: I came up with the idea a long time ago. The question is, when did I do anything about it? I'm in the construction-worker crowd, and I've heard other people say, "I'm lucky I had my hat on." But if you think about it, there's nothing in your hat [to protect you]. It's just a thin piece of cloth. So we put four millimeters of high-density impact foam in there. It is not safety gear. It's not a hard hat or a motorcycle helmet, and it's never to be worn in place of that. But when you're banging your head on the trunk of your car or wherever, it makes a big difference.

SD: It's been said that doing business in Vermont is tough. Has that been the case for you?

SD: Did you always want to work for yourself?

PK: Yeah. One thing I inherited from my parents without even knowing it was their work ethic. It's like, if you grow up with a grandmother who speaks Italian, you just speak Italian without even thinking about it. They had quite the work ethic, and my dad never worked for anybody else or hired anything out. When he was 70 years old he finally hired someone to put a new roof on, and he still helped.

SD: What's the best part of being self-employed?

PK: I'm not sure. Most of the people I know have their own small businesses or work for somebody else who does. My three sisters are all schoolteachers, and sometimes when they talk about pensions and their benefits, I'm like, nobody gives me any of that. Sometimes I don't even get a paycheck. But I couldn't have it any other way.

Got an interesting job or know someone else who does? Give us a shout! ken@sevendaysvt.com.

The original print version of this article was headlined "Hat Tricks"