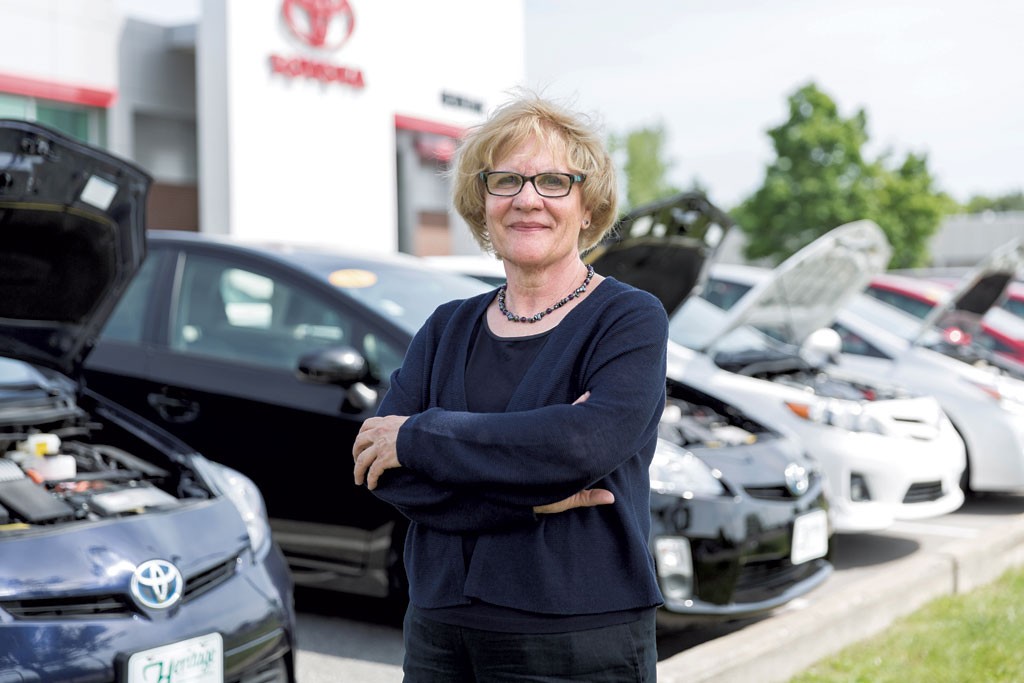 Eleni Floyd moved from her native Greece to Vermont in 1992 when her husband landed at job with IBM in Essex Junction. She initially worked for Chittenden Bank, but when a friend went to work for a local dealership now known as Heritage Toyota Scion, Floyd visited one day and decided, on a whim, to apply.

Despite her inexperience, and being the lone woman on the dealership's sales force, she was named salesperson of the month three months after arriving.

Floyd, a 62-year-old Richmond resident and a Prius driver, says she was fiercely competitive in her early years, logging 12-hour days to outsell her male rivals. Now, the mother of three adult sons says she has to hustle a lot less, and relies on legacy customers to help her meet her goals.

"The biggest misconception is that, when the customer walks in the dealership, we're going to lie to them, rip them off and make thousands of dollars on the transactions," Floyd says. "All those things are false."

The saleswoman recently sat down with Seven Days to share her experiences.

ELENI FLOYD: I had a hard time accepting the job, only because it was a mystery how much money you're going to make. One day this guy said, "Welcome aboard," and I said, "I'm not sure I'm taking the job. It seems to be a big mystery, what you're making; no one can tell you." The guy said, "What would you like to make?" and I said, "XYZ," and he said, "Oh, you will double that."

SD: What enabled you to be so successful?

EF: I worked hard. I went to the chamber of commerce and paid $100 and bought a bunch of names, and I called every person I could get hold of until they bought or they told me to go away. I started in October. Third month, I was salesperson of the month. In December, I was competing with this guy — awesome human being. He used to be the salesperson, so I stayed on New Year's Eve until 11:45 p.m. to sell the last car, to be No. 1.

After that, I was salesperson of the year for at least eight years straight. Then my sister died in Greece. Since then, my priorities changed. I still do very well — I was still No. 1 last year — but back then I was extremely competitive. Because when I entered the car business, [I] encountered the polyester, tobacco, short-sleeve, typical car guy. They all took bets how long I would stay — one month, two months. They weren't necessarily bad men; they were just the old mentality. They were like, "Some foreign lady is going to make it here?" But I did make it. I had to prove it to them.

SD: Do you have particular strengths and weaknesses as a salesperson?

EF: I never go in the lot to talk to you. Never done it, never will. If I come to you, I'm [considered] aggressive, and if I don't, I'm ignoring you. It's like I can't win. I never mastered the art of going in the lot to talk to people. So I talk on the phone a lot. The good thing now is, I don't talk to people if I don't want to. I have my own customers. They will tell you they are Heritage customers, but if I left, they would follow me. Some are now third generation. I sold a car last week, and [the customer] was 93 years old. The other was a retired [University of Vermont] professor who lives in Florida in the winter. I used to sell them cars when they were younger. If I worked as hard as I used to work, I would do twice as well.

SD: Is it true that salespeople have a rotation system for who gets first crack at a customer who walks into the showroom?

EF: No, absolutely not. The business has evolved a lot. We had what's called in the car business "ethics among thieves." What it means is, let's say it's winter and there are 12 of us on the floor, and you may not see more than a few people in a day. If you took a customer and someone else walks in, you sort of walk away and let someone else take the customer.

And that thing no longer exists. It's disheartening. The people who work now, they are nice people, college educated, [but] these kids don't see anything wrong with taking your own customers. These kids tend to be highly motivated overachievers, and to achieve, you have to sell a lot of cars. How do you sell cars? By taking as many people as you can.

SD: How do you feel about the poor public perception of car salespeople?

EF: It doesn't bother me. I can look you in the eye and tell you that more of the customers lie than the salesmen lie to the customers. I will give you an example. A guy said, "Great, Eleni, I like the car; I will be back next Tuesday." Nobody comes back. [At first] I had no reason to think they would lie to me. After a few months [on the job], I figure they will lie. So one day this guy comes in. I had sold him new cars, used vehicles ... He goes, "OK, I will be back with my wife." I literally grabbed him by the sleeve and said, "Don't lie to me. Tell me you don't like my price, tell me you don't like my truck, but don't lie to me." He came back the next day. Been buying from me ever since.

SD: There's talk in the industry of eliminating dealerships and showrooms, cutting out middlemen like you. What do you think of that?

EF: Who is taking care of you? Yesterday, a friend calls me: "Hey, I'm bringing in my Tundra for an oil change, and I wonder if I can test-drive a Tundra 2016 all day because I have meetings to get to." I said, "You can use my car. I'm not going to give you a company car. You can pick up my car." No questions asked.

I had a customer who said, "Eleni, I came to change my tires and I need to go to Carolina, and they said they can't take me for two weeks." I told her, "Don't worry about it." Two minutes later, somebody calls her from service and changes her tires. You buy a car from a factory, and you have an issue, and you think anyone is going to step in and help you? No, you're going to wait two weeks. You buy from me for 22 years and think I'm going to put you in line? No, you are going first, no questions asked. Selling cars is customer service.

The original print version of this article was headlined "Auto Motives"