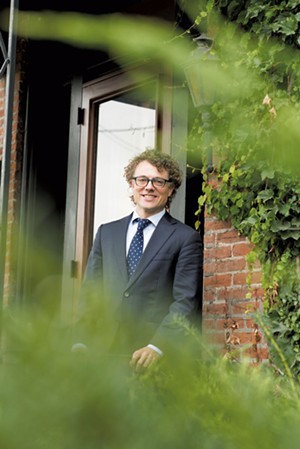 Fresh out of Harvard Law School, Chris Larson landed a job that most law school grads only dream about: He was hired by a large, prestigious law firm in Boston and given a 37th-floor window office overlooking Boston Harbor. There, he negotiated commercial real estate deals worth millions of dollars.

"My first year out of law school, I made more money than I'll probably ever make again," he says. "And I was terminally bored."

Larson, who grew up on a Wells dairy farm, returned to his boyhood home every chance he could. And whenever it was time to return to Boston, he recalls, he felt a crushing sense of dread. So, one day, Larson made a clean break from the big-city legal practice to try his hand as a country lawyer instead.

Larson, now 40, joined two other lawyers in a small family practice in Rutland. There, he devised a simple but effective way to help clients resolve what are often the most contentious and costly of legal matters: divorces.

About two years ago, Larson wrote an article, which he posted online for free, called "The 10-Minute Divorce." In it, he explained how Vermont couples can file their own divorce paperwork without the time, expense and acrimony that attorneys typically bring to the process.

Today, about 300 people per month visit Larson's website to read "The 10 Steps to Getting a Divorce (+2 with Kids)." In lieu of his previous approach of taking a $5,000 retainer up front, he now refers clients to his site and then answers whatever questions may arise later — for a fraction of the price.

As he describes this nearly pro bono service, "I think of myself more as a divorce coach." Seven Days met with Larson to find out more.

SEVEN DAYS: What compelled you to write this article?

CHRIS LARSON: Along the way, I started doing some family law, mostly because the need is enormous. More than half of us end up in family court, one way or another. At the same time, most people can't afford a lawyer. The benches are full of people who can't afford me and don't have thousands of dollars to spend [getting divorced] and have no idea or resources about how to represent themselves.

SD: Basically, you're giving away something you previously charged for?

SD: How does the cost of this approach differ from a traditional divorce?

CL: If two people agree [to a divorce], and they fill out the forms the way I've marked them up, it's less than $100. It's just a filing fee. On the other end of the spectrum, Seven Days wrote an article about someone who spent millions [on a child-custody fight]. So there's no upper limit.

SD: Can any divorcing couple use this method?

CL: Well, if there are businesses involved, there needs to be an accountant figuring out the values of things. But I've sat down with people with millions of dollars in assets, and they come in and say, "We recognize that you should get this business and I should get the house, and we'll split up our retirement accounts." Done.

SD: Does this work only if both parties are amenable to it?

CL: Yes. I try to encourage people to separate their divorces: their emotional divorce and their financial divorce. If people can do that — and there are no kids — then the financial part is all the family court deals with.

SD: What do other lawyers think of you giving away services for which they charge?

CL: Family lawyers, for the most part, are fighting over [clients with] the top 10 percent of income and assets. Those are the only ones who can afford us. The way I look at it is, we're an airline that sells only first-class tickets, and the planes are flying empty. My idea is, how can we give [clients] value that is not me [billing you for] going to court and holding your hand through the whole thing? It's a seat in the back of the plane, but you're still getting there.

SD: If you're not making money, why do it?

CL: I get more joy out of that hour of coaching than anything else I do as a lawyer. People come in with so much anxiety and confusion. I used to spend that hour trying to convince people to hire me. It was a free consultation, but really it was a sales pitch. Now I'm not doing that at all. People come in, they bring whatever paperwork they have, and we go over what step of the process they're at.

It's still a lawyer-client relationship. I can't talk to the other party. But I can say, "Here's your homework." Then I can come up with a plan of what's going to happen next and what to expect. Often I can predict what the outcome is going to be with a fair degree of accuracy. And I've got a box of tissues on the table, because people cry. A lot of the time, it's because there's a light at the end of the tunnel. I feel like I just gave someone a gift. And it's easy for me to do.