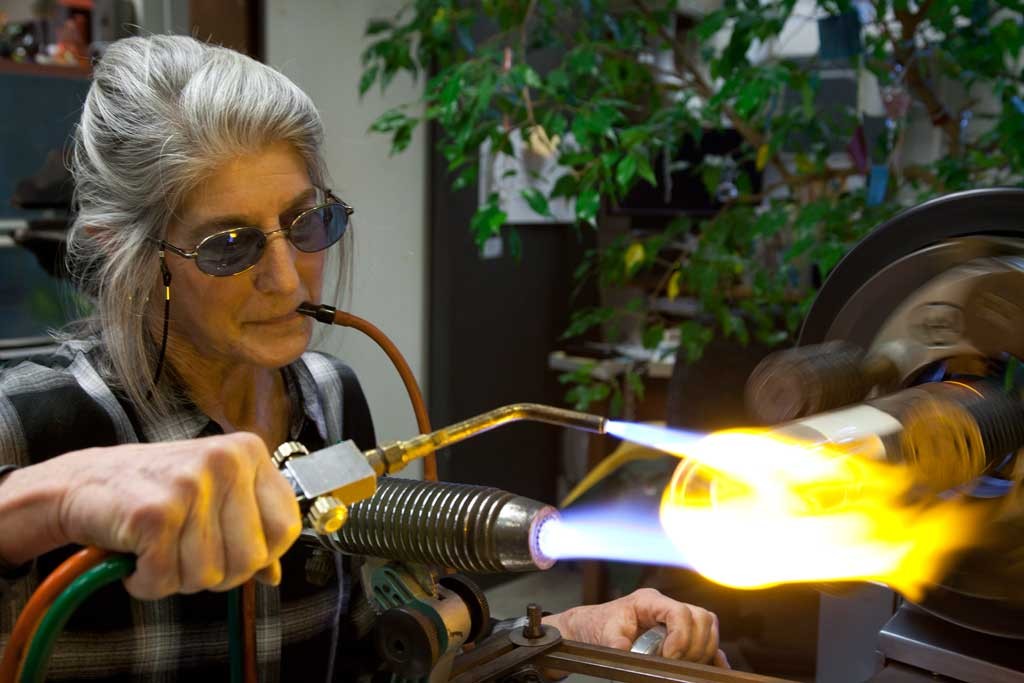 The red neon sign in the window is more than just a beacon to those seeking Angela Gatesy's workshop. It's a testament to her skills.

Gatesy herself made that neon sign, as well as the many glass animals and flowers that dot the shop's surfaces, and they lend her workshop a homey warmth. It's pleasantly at odds with the Brutalist architecture of the Cook Physical Science Building.

Gatesy, 60, is the scientific glassblower for the University of Vermont's chemistry department, a post she has held for 30 years. When her predecessor, Roy Clark, asked her in 1981 if she might like to learn his trade, Gatesy was working in the chemistry department stockroom and taking a few graduate courses, but hadn't yet, as she puts it, "figured out life." She accepted Clark's invitation and, after working with him for three years, formally assumed her mentor's position in 1984 when he retired.

Scientific glassblowers do not puff air through long metal tubes into molten blobs of glass. Gatesy refers to those folks as "artistic glassblowers," but her own work requires a certain artistic sensibility. She uses specialized torches, paddles and lathes to create complex glass devices that, in another context, might well be called sculptures.

Gatesy mostly works in borosilicate glass (aka Pyrex), melting, bending and stretching it to the exacting specifications of professors and graduate students. Gatesy has made glassware for UVM's College of Medicine and geology and engineering departments, among others.

Assistant professor of chemistry Adam Whalley says of Gatesy, "I've given her pictures of things I'd wanted her to make, just pipe dreams in my mind. She can put them together in a day or two, which is amazing."

On a snowy day in late February, Gatesy gave Seven Days a tour of her workshop and several of the labs that use her handiwork.

SEVEN DAYS: What exactly is scientific glassblowing, and how does it differ from "normal" glassblowing?

ANGELA GATESY: I work mostly with graduate students. People who are doing higher research need very specialized vacuum manifolds, or electrochemical cells or distillation apparatus — whatever will help them either purify their chemicals or help them make their chemicals. So I make their glassware.

My raw materials are different diameters of tubing, and I use torches. It's called "flame working." To manipulate the glass, you have to melt it, and once you melt it, you need to control the glass in gravity, so you need to rotate it.

The glass that I use has been developed for use in chemistry. It has a very low coefficient of expansion, since chemists like to thermally punish their glassware.

SD: Do you have drafting skills, or do you work right from the glass itself?

AG: From the glass. When they come in the door, people usually give me a schematic of what they want. One of the nice things about this job is that many of the pieces are one-offs. I'll make something, and I haven't made it before, and I'm probably not going to make it again. Depending on their complexity, those are probably the most rewarding.

SD: Is it unusual for a university to employ a scientific glassblower? Isn't some of this glassware available for purchase?

Some of these things are not really available in a catalog. A grad student can walk in with a piece, I can fire-polish it for them, and they can walk out the door. To get a three-inch piece of glass cut, and have it right here, they would've had to have ordered it, like, two weeks ago, and paid who knows how much for it. I try to make things as quickly as I can so people don't have to wait.

SD: What is this enormous contraption?

AG: That's an oil diffusion pump. It took me a long time to put it together, but I made it without having an end user. And then [associate] professor [of chemistry Rory] Waterman said, "I have a big project, and I really want this thing made — it's called an oil diffusion pump." I said, "Oh, great, I have one." He said, "You're kidding!" It was pretty nice when it all came together.

SD: Do you consider yourself more of an artist? A scientist? An artisan?

AG: I guess I do think of myself more as a technician. I think I would be flattering myself to say I was an artist. [Displays a glass trillium she has made.] I really do enjoy making things, and I guess a lot of it does go back to nature. It's a way to develop my skills. Even doing this helps with the scientific glassblowing: figuring out how to put things together and not having it break before you're done.

I'm always developing my skills. One of the really nice things about the position is that there's always something to learn. It's artistic, and it's scientific, and it's a nice melding of the two.