Words at Play: 'Pete's a Pizza' 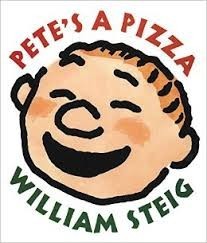 When I visit home childcare providers through VSA Vermont's Start With The Arts program, I read a book, then do an art-based activity. I really enjoy using the book Pete's a Pizza by William Steig. Steig is best known for Shrek!  but he has written many other wonderful books including Sylvester and the Magic Pebble, Brave Irene and Doctor De Soto. After a long career as a New Yorker cartoonist, he began writing books for children at age 61. All his books feature amazing illustrations and rich vocabulary.

At the beginning of Pete's a Pizza, Pete is miserable because it's raining and he can't go outside and play football with his friends. To cheer Pete up, his father pretends to turn him into a pizza. He kneads Pete, tosses him in the air, covers him with checkers that represent pepperoni and puts him on the couch to bake. Pete runs away before he can be eaten. By that time, the sun has come out and he can go out and play.

After I read the book aloud, each child gets a chance to become a pizza. Our first pizza lies on the floor and all the other children gather round. We open and shut our hands and say '"Knead, knead, knead." Then we pretend to shake on some cheese, then sprinkle on some olive oil. The toppings are next, in the form of handkerchiefs. Sometimes the toppings are what you would expect on a pizza — peppers, olives, mushrooms or tomatoes. But some children pretend to put on macaroni and cheese, peanut butter or ice cream. Once, a boy added a truck! When all the toppings are in place we chant "Bake, bake bake," and I say, "The pizza is smelling good." Three more bakes and I mention that I am very hungry. After the final three bakes, I say, "Time to eat the pizza!" and the pizza runs away, shedding all the handkerchief toppings.

Next we make paper-plate pizzas by gluing cut-up pieces of construction paper on a plain paper plate. You could even just draw on the toppings. Projects don't have to be complicated to be enjoyable for children. Recently I was doing this project at a home daycare provider's house that had a toy plastic oven. The children "baked" their paper-plate pizzas in the toy oven. One girl offered me some, but as I reached out for it she warned me, "Be careful, it just came out of the oven!"