Word on the Street Project to Set Poetry in Concrete 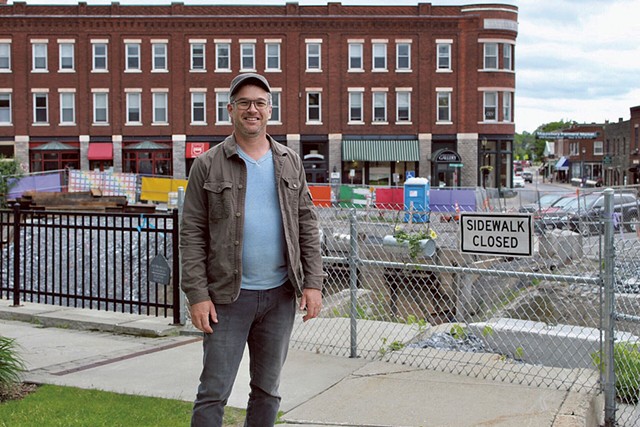 In a few years' time, stanzas of poetry will dot the town of Middlebury like X's marking hidden gems on a treasure map. By the end of next year alone, five original poems will be engraved into the town's sidewalks, fusing literary history with the creative energy that buzzes there today.

The poems are part of a new project called Word on the Street, the brainchild of Community Workshop co-owner David Hohenschau. Community Workshop collaborates on "placemaking" projects with towns and cities all over North America. But 44-year-old Hohenschau, who's lived in Middlebury for a decade, has been on the lookout for a project he could bring home for a while, he said. Given Middlebury's poetic tradition, which includes Robert Frost and Julia Alvarez, poetry seemed like a fitting locus for community building.

"People who live here will go find the poems and read them and feel inspired and feel more connected to their community," Hohenschau told Seven Days, "deepening people's relationships to where they live."

Now, equipped with a $15,000 Animating Infrastructure Grant from the Vermont Arts Council, he's ready to break ground on the initiative.

The poetry featured in the project will be as homegrown as it comes; Middlebury residents will pen poems using their town as a muse.

"Poems in the sidewalk is cool," Hohenschau said, "but it's way more exciting that hundreds of people might take a moment to be thoughtful and try to write a poem about their community."

He will solicit contributions once the town's schools are back in session, asking for works that relate to Middlebury's built environments. A poem etched into the sidewalk in front of Ilsley Public Library, for example, should somehow evoke libraries.

A panel of jurors will pick five poems to be immortalized in cement. Hohenschau wants that jury to represent all ages and all walks of life, he said, provided they have "poetry chops" to give some legitimacy to the selections.

Like the Saint Paul Sidewalk Poetry project in Minnesota, to which Hohenschau looked for inspiration, Word on the Street embodies the philosophy of "creative placemaking," a practice that harnesses artistic and cultural means to make places more inviting. As construction continues to mar the idyllic college town over the next year and a half, Hohenschau hopes the poems will offer an aesthetic alternative to the unsightly jumbles of concrete and metal fences on its main streets.

The organizers also anticipate that, beyond strengthening residents' sense of Middlebury-ness, the poems will bring visitors — and their patronage — to town. Previous Community Workshop initiatives have had positive ramifications for towns' economic development, Hohenschau said. In 2016, his business partner, Rebecca Sanborn Stone, organized Bethel's Better Block project, which stimulated new investment by making over the downtown for a weekend.

Hohenschau likes the idea of keeping the poems exclusively on the sidewalk, like cached treasures. If, over the next few years, he can gather enough poems to get a trail going, he envisions a map leading poem hunters toward each jewel, from Washington Street Extension toward downtown and the college.

The VAC's Michele Bailey, who was involved in administering the grant, said the growth potential was part of the project's appeal.

"What we really like about this project is that they're starting with five sites, but they have a vision for expanding this beyond, to a much bigger walking tour," she said. "So there's potential for growth and continuation after the grant.

"This seemed to be at a really timely point for Middlebury, as they go through all this construction right now, to have something really exciting for the community to focus on," Bailey added. A shared story and an inviting aesthetic can be key to creating better communities, she said.

Hohenschau's proposal was one of 52 submitted to Bailey's team by 45 communities. Earlier this month, that team picked four winners. The grant for Word on the Street went to Middlebury Underground, the local arts- and event-producing nonprofit that will be the project's fiscal sponsor.

Engraving words into already-set pavement isn't cheap; Hohenschau estimates the cost at $1,000 to $2,000 a poem. His friend Nathan Christner of MergeCrete, a local concrete specialist, will start doing the etching in spring 2020 at a rate of one poem per month, using stencils and tools such as sandblasters.

While Hohenschau seeks poetry submissions of all types, he may draw the line at epics or ballads. Stencil size and installation technique will ensure that, like tweets, the poems have a character limit.

Organizers are working on ways for people to get involved without consigning their words to the pavement. This summer, with Middlebury Underground's help, Community Workshop will bring poetry-related activities to town events, such as stations at which kids can type or handwrite poems at the Middlebury Festival on the Green in July.

"This is the land of Robert Frost, the home of Bread Loaf Writers' Conference, a haven for writers and scholars from Julia Alvarez to Jay Parini, a place where local poetry groups thrive and where schools and local organizations love to pitch in," said Lisa Mitchell of Middlebury Underground. "Middlebury is the perfect place for the Word on the Street poetry trail."