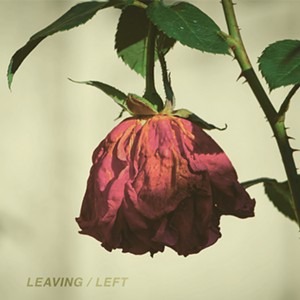 Leaving / Left is the fourth album from Wool See, a self-described "imaginary rap band" created by rapper and producer IAME. While Vermont usually specializes in nurturing homegrown talent and watching them leave, IAME is a recent arrival from Portland, Ore.

He was an established commodity in the hip-hop scene there, as a member of two of the city's iconic rap crews: Oldominion and Sandpeople. As IAME, his catalog was already five albums deep — and that's not even getting into his collaborative work. Rarely has the 802 hip-hop scene received an artist so accomplished or fully formed.

This latest album is heavily shaped by IAME's life-changing move across the country. Adjusting to the Northeast Kingdom can't be easy after growing up in a metro area with more than two million people. Yet while Leaving / Left is full of conceptual tracks, it isn't a concept album about his new life; he's got too much else on his mind.

So, what separates an "imaginary rap band" from a standard-issue rapper/producer? For starters, the incredible melodic range. Tracks such as "Lumps" demonstrate that Wool See can produce intricate, orchestrated hooks and sound as well as any indie band on a major label today. He also drops some single-worthy Auto-Tune for the chorus of "Sideways," nailing the space where EDM and modern R&B overlap.

The music is impressive, but it never overshadows the hip-hop fundamentals. This dude can really rap. He's so consistently creative, it's hard to name standout performances. Still, album closer "Everything Goes Dark..." might be just that, spotlighting Wool See's agile flow and meticulous wordplay.

The center of this album, though, is the title track. It's an emotional journey that builds slowly and hits hard. Wool See cuts a perfect balance between baring his soul and remaining opaque, with a performance so strong that you could easily miss the intricacy of his rhymes.

The beats here absolutely earn the "one-man band" claim. Wool See makes musical, constantly shifting soundscapes — equal parts Radiohead and Flying Lotus. The album is packed with ideas, and all of them work. The mastering touch of Zebulon Dak makes it a treat to listen to, as well. This album bangs with huge dynamic range.

Leaving / Left is the work of an experienced, talented songwriter. Wool See's lines are spare and artful and reward repeated listening. Every song here is carefully layered, giving listeners a lot to chew on. From celebrity culture to the role of alcohol in the music business to the gentrification of Portland, the album is the journal of a busy, hungry mind.

It remains to be seen how Wool See's music will evolve from here, but evolve it will. As he states at the end of "Lumps": "I do this shit to fight depression, not exist in the spotlight." Sounds like he should fit right in here.