Woodstock Volunteers Raise Half a Million Dollars for Those in Need 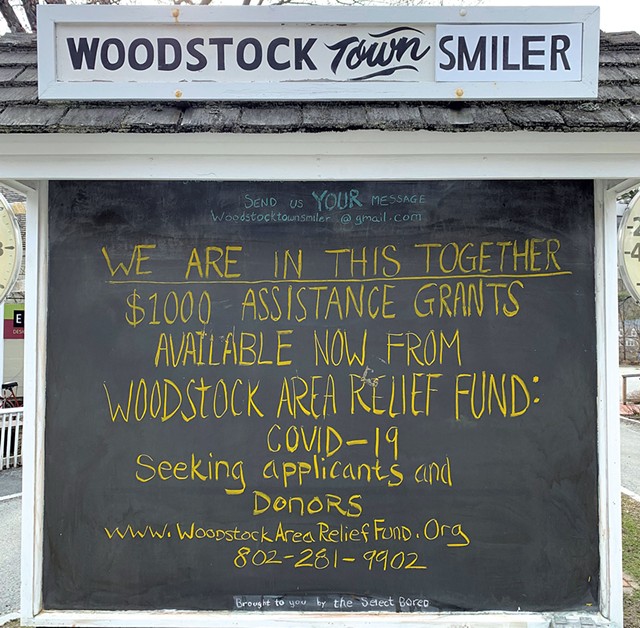 After Tropical Storm Irene struck Vermont in 2011, a group of Woodstock locals leapt into action. In weeks, the volunteers raised about $440,000 to help residents and businesses recover from the flood.

Nine years later, some of those same volunteers are back at it. As the coronavirus pandemic shut down the state in mid-March, a group created the Woodstock Area Relief Fund to provide $1,000 grants to people hit hard by the economic meltdown. Since its creation, the fund has raised about $515,000, spokesperson Charlie Kimbell said. About 40 percent has come from second-home owners, according to the group.

Money is available to those in the Windsor Central Supervisory Union school district, which also includes the towns of Barnard, Bridgewater, Killington, Plymouth, Pomfret and Reading. Thus far, the fund has helped hundreds of people, Kimbell said. He recalled how one single dad, unable to work because he didn't have childcare, wept when he received a grant.

The group used its experience during Irene as a blueprint. But the pandemic is far different from the storm, Kimbell said, when they could put a price tag on the damage done.

"It's very invisible, how people are affected economically," he said.

To raise money, the group first approached residents known for their philanthropy; one donor gave $50,000. Then they used Front Porch Forum and school email lists to spread the word about the grants. More old-fashioned techniques worked, too: Someone renamed the town chalkboard "the Smiler" (from "the Crier") and wrote a message soliciting donors and fund applicants.

Kimbell, a Democratic state rep, worries the fund will be needed for some time. Expanded federal unemployment benefits expire at the end of the month, and reopening is slow going. But he's encouraged by community members' willingness to band together when the going gets tough.

"There are people who immediately want to stand up and help," Kimbell said. "It's great to be in that kind of community."

The original print version of this article was headlined "Cashing In"