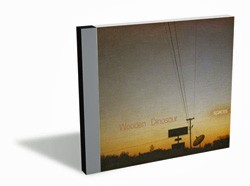 When they released their 2010 debut album, Nearly Lost Stars, Wooden Dinosaur immediately became one of the most compelling and artistically provocative bands in Vermont.

That record, a deeply nuanced and emotionally fearless blend of worldly art rock and intimate indie-folk, was easily among the finest released that year, if not the last decade. The bar — and subsequent expectations for the band’s sophomore effort — were set extraordinarily high. On Spaces, not only do Wooden Dinosaur exceed those expectations, they offer an album so thoughtfully conceived and beautifully executed that it is nothing less than an instant Vermont classic.

Wooden Dinosaur is the brainchild of songwriter Michael Roberts. On Nearly Lost Stars, he brooded, elegantly musing on insatiable wanderlust, unrequited love and other dark corners of an addled mind and poetic heart. Though not depressing, his writing exuded a palpable yearning and, at times, an insecurity that steeped the record in melancholy. Usually, the worst thing that can happen to a good, sad songwriter is to cheer up. (Like when Jeff Tweedy started writing songs about doing dishes.) Roberts is the exception. Now married and settled in Brattleboro, he is stable and happy. And his writing is even more focused, yet it retains the irreverent poignancy that made Nearly Lost Stars so gripping.

On the loping opener, “Talking About Death,” Roberts confronts mortality with vitality and with lyrical turns both cunning and calming. “Good Winter,” presumably an ode to his blushing bride, could stumble into romantic schmaltz were it not for his gentle subtlety, winking humor, and a vocal croon that sounds equal parts Willie Nelson and They Might Be Giants’ John Linnell. Roberts gets a touch political on “I Shot a Gun.” Yet even when addressing weighty subjects, he’s light and winsome but affecting.

Though Roberts is remarkable, his talents may be outshone by the collective efforts of his backing mates. The record’s arrangements are stunning and intricate. They also represent a stylistic evolution from Nearly Lost Stars. Rather than esoteric indie-folk, Wooden Dinosaur delve into a sort of intellectualized early-country sound — imagine if Sufjan Stevens composed for Bob Wills and His Texas Playboys. Playful horn lines pirouette around Katie Trautz’s lithe fiddle strokes. Ornate vocal harmonies drift over ragged, propulsive drums, while Asa Brosius’ pedal steel shimmers like a sonic aurora borealis. What’s most impressive is that these fascinating compositions and exquisite performances never distract from Roberts’ writing. Instead, they add depth and character, suggesting an uncommon musical symbiosis.

Wooden Dinosaur celebrate the release of Spaces with a show this Saturday, March 17, at the Black Door in Montpelier.