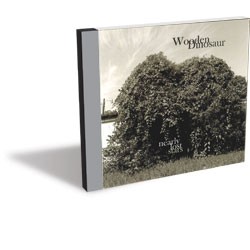 With Nearly Lost Stars, Wooden Dinosaur have finally released their debut full-length album. The trio is composed of Brattleboro songwriter and multi-instrumentalist Michael Roberts, percussionist Frank Roberts and Montpelier fiddler Katie Trautz. But Trautz fans expecting Mayfly-like traditionals could be in for a surprise. The record comprises a distinctly provocative collection of art and indie folk, and No Depression-style Americana. And it may just rank as one of the year’s most finely conceived and executed local albums — in any genre. A discordant phalanx of strings churns through the opening stanza of “Reminders,” framing Michael Roberts’ deceptively plain poetry. “Sadness doesn’t walk this way anymore. / All the skies are cloudless when I look. / Sometimes wine drips across my eyes and nose. / In my house there’s always food to cook,” he sings. His tone is natural and easy, suggesting a whimsy his words will later betray. But then, just at the depths of his bleak introspection, the song, and singer, transform with soaring urgency: “I remind me of someone. / I look just like someone. / I sing just like someone. / And I cry just like someone. / And just like someone, someday I’ll have one who reminds himself of me.” “Can’t Be Me” is a lilting acoustic pop nugget and a not-so-subtle nod to indie-folk godfathers Neutral Milk Hotel. “In the stars, I was waiting, / In an aeroplane o’er the sea,” Roberts croons over dovetailing steel-guitar lines and skipping banjo.

“Ghosts of Geeshie” is a coolly clever caricature of rural Americana, equal parts anathema and affection, not unlike some finer moments on A.A. Bondy’s American Hearts.

“Broken Glass” borders on psychedelic folk. It builds from a surging, harmony-fueled rumination into a whorl of ringing electric guitar, tinted by golden flecks of sparkling trumpet.

Trautz takes the lead on the crushingly gorgeous — and devious — “Firetrucks.” Her plaintive voice winds with Michael Roberts’ breathy trill over a bed of shifting melodica and string tones.

At moments, Roberts’ reedy voice is reminiscent of They Might Be Giants’ John Linnell. He displays a similarly playful approach to songcraft throughout much of the record’s second half, particularly on “Paper Cars” and “Build It.”

“Going North” is loping road music. Deliciously melancholy, it sets up the record’s twin closing songs, “You Are Not My Love” and “Labors of Love,” which finish the album with alternately warm and heartwrenching beauty. It is a fitting end to a truly stunning and mystifying effort.