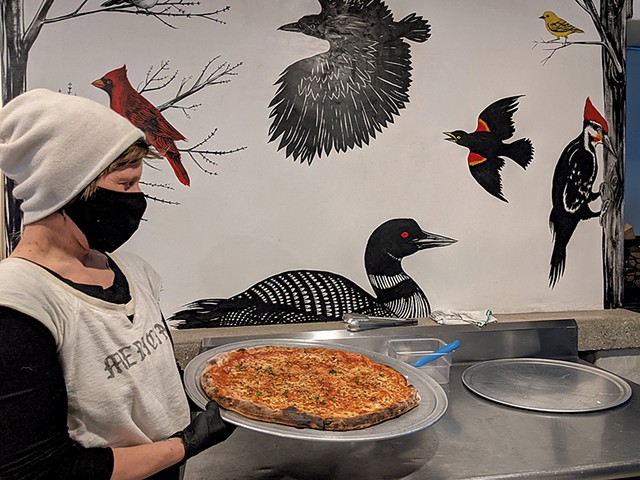 After about a decade of mobile pizza making, Woodbelly Pizza launched a brick-and-mortar location at 79 Barre Street in Montpelier on March 4. For now, the restaurant is open Thursday through Saturday for takeout only. But Woodbelly's worker-owner cooperative plans to expand hours and offer limited seating indoors and out as the weather warms and pandemic restrictions allow, according to three-year member Kes Marcel.

The new pizzeria is on the same block as the commercial kitchen the cooperative uses to prep ingredients for its three mobile ovens. Establishing a storefront was already in the works, Marcel said, but when COVID-19 sharply curtailed Woodbelly's usually busy schedule of festivals and farmers markets, "the pandemic kinda pushed our hand."

Woodbelly's pizza and fougasse — a traditional French bread that resembles a large, thick soft pretzel — begin with a 15-year-old sourdough starter originally from Italy, Marcel said. Pizzas feature as many local ingredients as possible. One recent offering was topped with squash, apple, sausage, fennel and garlic; another, with chèvre, kale, caramelized onions and artichoke hearts. The menu also includes salads and Vermont beer and hard cider.

The project was supported by a loan from the Cooperative Fund of New England. Woodbelly also received a Paycheck Protection Program loan.

The original print version of this article was headlined "Home Slice"