Art Review: Harriet Wood, “In the Moment: Now and Then,” a retrospective exhibit of paintings. Catamount Arts Center, St. Johnsbury. Through April. 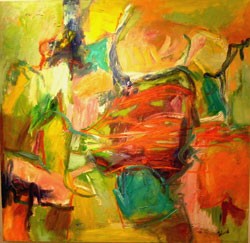 “Abstract art enables the artist to perceive beyond the tangible, to extract the infinite out of the finite,” wrote first-generation Abstract Expressionist Arshile Gorky (1904-1948). “It is the emancipation of the mind … an explosion into unknown areas.” Such exuberance surfaces in the work of Harriet Wood, a Vermonter with deep art-world roots. Her 10-year retrospective of work, entitled “In the Moment: Now and Then,” at St. Johnsbury’s Catamount Arts Center reflects her awareness of, and brief participation in, the New York art scene of the mid-20th century. That lively context influenced her flawless color harmonies and sturdy, nonobjective compositions.

One of the sturdiest appears in “Violet Hour.” The 30-by-40-inch acrylic on canvas is weighted like a teeter-totter, with masses to left and right facing off at two ends of a slight incline. Their fulcrum is a relatively airy space at the center of the composition, defined by a few tilted verticals. Cadmium-red accents appear brighter beside Wood’s violets and purples.

Movement is everywhere in her paintings. Four patches of blue-green roll around the center of “Woodbury Winter #5.” The 49-by-49.5-inch oil is dominated by warm yellows and reds, while the cooler hues floating at the tips of an implied cruciform shape subtly spin the composition counterclockwise. The hub is a soft-edged red square with thin lines ambling over it.

The three 34-inch-square canvasses of “Alex Wants to Dance I, II, III” are hung tightly together, suggesting a triptych. The dominant forms are cast in pale orange, salmon and pinks modulating into purples. They are organic shapes that proceed across the three canvasses from left to right, weaving in and out of clouds of green and blue. No doubt well schooled in the theories of Hans Hofmann, Wood pushes and pulls movement and space in her pieces by virtue of colors layered at different depths of the picture plane. She also varies the intensity of her paint, giving the eye many textures on which to rest.

Around 1959, Wood became involved with the NO!art group while studying at the Pratt Institute and the Art Students’ League. In a 1995 essay about the NO!art movement that she wrote for the catalogue of an exhibition at Berlin’s Neuen Gesellschaft für Bildende Kunst, Wood says, “Our art was hot and in the true spirit of rebellion, visceral, immediate to the feelings that generated it, and meant to shock the public out of its ennui and denial.” One of the group’s most prominent shows presented “Shit Sculptures” at the Gertrude Stein Gallery. Wood’s work still packs a visceral punch, but now she applies her passion to creating beauty rather than shocking the public.

The 45-by-76-inch diptych “Karuna,” painted this year, seems to allude to a peaceful landscape. A wavy blue horizontal axis delineating the lower third of the canvasses ties the two panels together while appearing to move like a mountain stream. Verdant greens and vertically oriented, treelike brown forms reside near the upper right and left corners of the diptych. White brush strokes separate hues in several places, especially in the upper areas of the painting, offering the viewer breathing space in the lush tapestry of color. The title “Karuna” is a Yogic term for compassion and empathy — a far cry from the anger of NO!art, which was in part a response to the Holocaust and the inhumanity of modern society.

Wood’s current exhibit is more about now than about the “then” of 50 years ago. And that’s as it should be, because, as she points out with the title of her 1995 essay, “the beat goes on.” Wood paints in, and for, the 21st century.