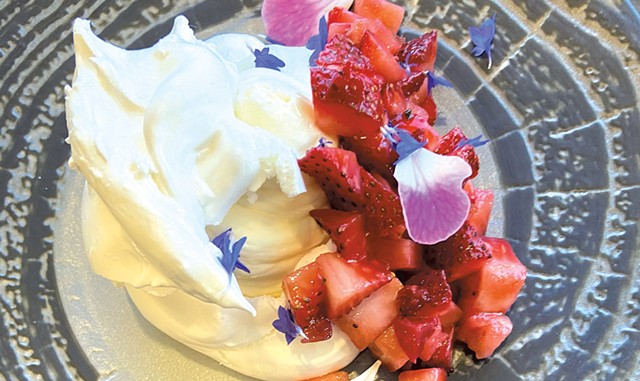 The food scene at the Essex Experience will get even hotter this fall, when bramble opens with a menu "kissed by fire" in Suite 101.

A custom-built wood-fired oven will anchor the center of the restaurant in the former Orvis outlet. "It's the heartbeat of what we're doing," said Shawn Hyer, who owns the business with his wife and bramble's executive chef, Colleen Hunt.

The industry veterans recently returned to Vermont to be near friends and family and to open their first restaurant. "Our dream has always been to open something here in Vermont," Hyer said. "But we'd been a little hesitant. The pandemic forced us to take that big leap."

The couple first worked together at Mount Snow Resort early in their careers, but they realized that "while we worked together really well, we didn't ever want to do it again unless it was for ourselves," Hyer said. They later worked across the street from each other in Park City, Utah, before moving to Napa, Calif.

Hunt, who grew up tending the gardens and cooking for guests at her parents' Cooper Hill Inn in East Dover, was most recently executive sous chef at J Vineyards & Winery. A sommelier by trade, Hyer has spent the past 12 years in general manager and executive roles, sometimes at the helm of Michelin-starred restaurants.

The "micro-seasonal" menu at bramble will be 15 to 20 percent pizza made in the wood-fired oven, Hyer said. The remaining menu will include fresh oysters and various dishes made with local ingredients, such as wood-fired mushrooms and freshwater trout with spinach.

"There's always something fermenting, pickled, preserved, salted, aged or brined," Hyer said. "And there will be wood burning in the oven all day, every day."

The original print version of this article was headlined "On Fire"