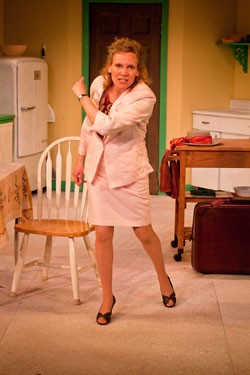 Such is the sorry state of domestic affairs described by Shirley Bradshaw (née Valentine) in the opening moments of playwright Willy Russell’s 1989 Tony Award–winning Shirley Valentine. A Vermont Stage Company production of the play is currently running at FlynnSpace in Burlington.

As the title character in this one-woman show prepares a Thursday-night meal for herself and her husband, Joe, she narrates a tale of marital woe to the audience while occasionally conversing with the stage-left wall of her simple kitchen. These eccentric snippets of conversation come to seem normal after we learn how little life remains in the couple’s relationship — and after Shirley discloses that Joe sometimes vents his dissatisfaction to the kitchen appliances.

In the title role, Karen Lefkoe — a staple of the Middlebury Actors Workshop — has embraced an acting challenge of dizzying scope: a full-length play in which no other character appears (though several others are vividly described and imitated). That she portrays a middle-aged Liverpudlian — Liverpool being a region where the English accent is distinctive and strong — surely adds another degree of difficulty to her performance.

(Incidentally, non-North American English accents have factored prominently in all three of VSC’s plays this season. The company’s final show will be Shakespeare’s As You Like It.)

Under the direction of Doug Anderson, another fixture of the Middlebury theater scene, Lefkoe shines as Shirley. Her accent passes muster (this assessment based on many Beatles interviews heard over the years). Having cleared that first hurdle, she makes the role her own. While some portrayals of Shirley Valentine play to her long-suffering essence, such as Pauline Collins’ turn in the 1989 film adaptation, Lefkoe brings a bounce and vitality to the role. Her Shirley, at 42, is lost on the road to wherever her dreams were supposed to lead her. But she can still chuckle occasionally at the absurdity of her circumstances. As she says, “If you described me to me, I’d say you were telling me a joke.”

All this changes when Shirley is invited by her girlfriend Jane to take a trip to Greece. So calcified is her home life that the prospect of her leaving Joe to fend for himself for a fortnight seems incredible, even to Shirley’s own daughter. It’s precisely the doubts of people in Shirley’s circle about her capacity to live her own life, however, that finally push her to shake things up.

Scenic designer John Paul Devlin’s two sets — the Bradshaws’ modest home, with its yellow-on-white interior; and the beachfront taverna where Shirley lands in Greece — frame this portrait of a life safely lived in sedately inviting tones. The simplicity and light of the production’s effects reinforce the mood and themes of Shirley’s narrative exploration.

One of the play’s notable strengths is the way in which Shirley’s monologue flows from topic to topic. In the first act, her commentary ranges widely and has the discursive, meandering quality of a housewife getting buzzed on Riesling while preparing yet another dinner destined to go unappreciated. Shirley shares anecdotes about recent events, reflections on her youth, family life, friends and neighbors and a few of the insights at which she has arrived.

Some of these insights border on batty, but they also reveal a mind that has not yet abandoned its search for meaning. Shirley’s comparisons of marriage to the Middle East (“There’s just no solution”) and of the clitoris to penicillin (they were both there the whole time just waiting to be discovered) stand out as particularly amusing. These ruminations lead Shirley to the more profound questions at the heart of the play: Whatever happened to that happy-go-lucky young woman she used to be? And, more to the point, can that woman be revived?

The second act finds Shirley having thrown wifely caution to the winds and traveled to Greece for a fortnight’s holiday with Jane — without her husband’s approval. There, she narrates in a more linear fashion the events of her flight from domestic drudgery, which take some dramatic turns toward a surprising climax.

Equally surprising, however, is the way the risks that Shirley has taken in traveling to Greece fade in the sun. She hits a couple of emotional bumps on her island tour, but her monologue sacrifices depth for a more superficial sweetness — reaching the point of treacle in some spots. To be fair, Shirley’s bold adventure should be judged on its own terms. What she’s trying to escape is an unsatisfying middle-class life largely of her own creation. That her epiphanies are more plainspoken than pithy is an authentic observation about her character, not a point of criticism.

Lefkoe embodies this worldview convincingly. Her energy and cheery smile modulate the darker mood that drew Shirley out of her shell. For her, rock bottom is a comfort zone devoid of newness and discovery — not outright depression, more like a bedsore of the spirit. The familiarity of this pitfall of modern life may explain the enduring popularity of this play and its quirky protagonist, both well realized in this production.