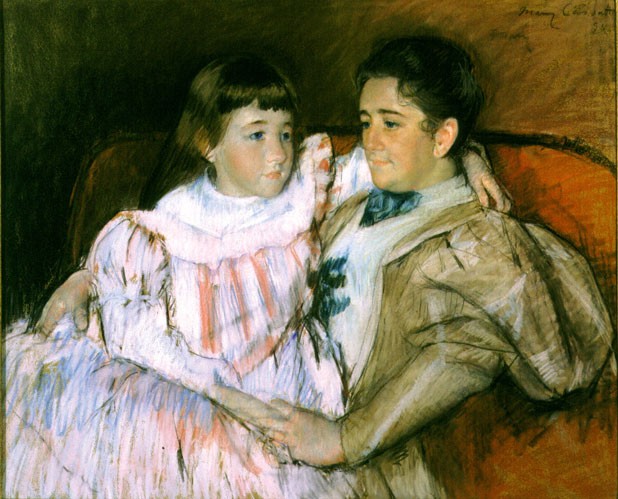 The American artist most closely identified with Impressionism is undoubtedly Mary Cassatt. She joined the avant-garde group for its exhibition of 1879, and was also instrumental in the development of the Impressionist movement on this side of the Atlantic. "Mary Cassatt: Friends and Family," on view now at the Shelburne Museum, assembles 58 Cassatt prints and paintings into a dynamic show that places her work in the context of her life and times. It also displays how masterful her art truly is, and not just the paintings - Cassatt's prints and pastels in the exhibition are particularly virtuosic.

Born into an affluent Pennsylvania family, Cassatt embarked on her study of art in Philadelphia and continued it in Europe in the 1860s. She moved permanently to Paris in 1874, and coaxed her parents and other family members to join her. Many of the works in the Shelburne exhibition are based on Cassatt's family life - nieces and nephews were among her favorite subjects.

"Ellen Mary Cassatt in a Big Blue Hat" portrays a pensive, seated girl in a white dress and large hat with an oversized bow. Cassatt was already known in her lifetime for painting mothers and children, and her portrayals are more humanist than are those of Renoir and other male contemporaries. Cassatt's girls appear to have inner lives, and her women, while often engaged in domestic tasks, are real rather than ornamental and idealized.

In 1886, Cassatt appeared in the first New York exhibition of Impressionism, but she did more to persuade America to accept the style by advising her close friend Louisine Havemeyer to purchase what was then considered the challenging contemporary art of Degas, Manet, Monet, Pissarro and others. Louisine's husband, Harry Havemeyer, was a sugar magnate. Nearly 2000 items from the couple's art collection eventually ended up in the Metropolitan Museum of Art in New York City. Their daughter, Electra Havemeyer Webb, founded the Shelburne Museum.

The 1895 pastel "Louisine Havemeyer and Her Daughter Electra," now in the Shelburne Museum's collection, shows mother and child placidly relaxing together on a sofa. Their clasped hands in the foreground seem to close a circle of affection. Many of Cassatt's portraits are quite traditionally posed. She is more apt to break with Western compositional conventions in her color prints and, like fellow Impressionists, was fascinated with the East.

In 1890, a show of woodblock prints by Kitagawa Utamaro (1753-1806) took Paris by storm; Cassatt's subtly colored dry points with aquatint, from 1890-91, were clearly influenced by the Japanese artist. In a letter to Berthe Morisot, the other great female Impressionist, Cassatt specifically recommended the Utamaro show. The critic Elliot Bostwick Davis writes in a 1998 essay from the journal Magazine Antiques, "Utamaro, above all other members of the ukiyo-e school, represented women who embodied a cultivated femininity and sensuality - attributes that Cassatt evoked in her color prints."

That suite of color prints is rich with patterned backgrounds. In "The Fitting," a seamstress, positioned in the foreground with her back to the viewer, sews a client's striped dress as the client looks down at her. A steep diagonal axis enlivens the space. In "The Coiffure," a half-nude woman adjusts her topknot in a mirror like a bathing geisha. Floral patterning such as Matisse would be known for two decades later occurs in the rug and wallpaper, while the woman adjusting her hair sits on the edge of a broadly striped, overstuffed chair.

After more than 10 years of near blindness that left her unable to work, Cassat died in 1926 - the year of Claude Monet's passing. As an artist, Cassatt is firmly established among the leaders of the Impressionist movement, but her role in advancing that stylistic cause in America is rarely mentioned. Through her friendship with Louisine Havemeyer, Cassatt had a great impact on American cultural tastes at the turn of the last century. Today, at Electra Havemeyer Webb's Shelburne Museum, Cassatt's behind-the-scenes role comes to center stage.