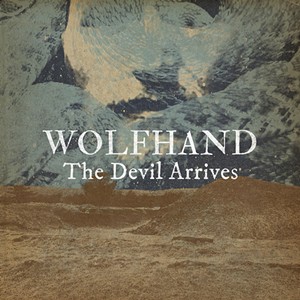 Burlington rockers Wolfhand specialize in what they call "cinematic heaviness," and rarely does a band's own bio nail its sound so perfectly. Sonically, the quintet hails from the hinterlands, where desert rock, doom metal and good old country music overlap. On paper, that description may come off as contrived. But Wolfhand's latest album, The Devil Arrives, is simply fantastic — and far more accessible than you might think.

Wolfhand have been honing their unusual musical recipe since 2016, when they dropped a string of scorching singles before unleashing their Plaguelands EP the next year. 2019's Live at WKBM offered some previews of the material here, but The Devil Arrives represents the band's proper debut album, and it's a knockout.

To make an album of instrumental rock this compelling isn't easy. These are huge, anthemic songs that deliver both crushingly heavy riffs and moments of real beauty, often at the same time. For all the distinctly Western flavor, Wolfhand really deliver on the "cinematic" part of their pitch, too. Everything sounds like the backdrop for some unforgettably weird summer blockbuster, like Quentin Tarantino doing Blood Meridian.

Tracks such as "Black Winds" and "Canyon Wizard" show off the band at full strength, and these gentlemen would clearly melt your face off live. Yet the haunting quiet interludes, such as "Returning," and the stark album closer "Gallows" hit just as hard. The band can also stretch way out — "Doomed Convoy" gallops past the seven-minute mark — without losing your attention.

While their sound is a million miles away from a prog-rock noodle-fest, Wolfhand are a posse of absolutely smoking musicians. The lonesome howl of lap and pedal steel guitarist Ben Chussid will grab your attention first — his is clearly the lead instrument in this unique lineup. Mike Fried's work on keyboards and synths is also stellar, especially on the tracks in which he steps into the front, as on the ghostly "Saloon."

Gorgeous, dynamic compositions really let the rhythm section shine, too. Drummer Adam Wolinsky, a prolific Renaissance man in his own right, regulates with both chops and taste. The team of Dave Mahan on guitar and Nick Wood on bass anchors every track with downright muscular performances.

The sound quality is equally superb. Much of that is to the credit of Wolinsky, who engineered and recorded the album himself. The mixing work of Skyhammer Studio head Chris Fielding does great justice to Wolfhound's infinite horizons. Thanks to the mastering work of James Plotkin, these songs sound huge at any volume. (But, you know ... turn it up.)

The Devil Arrives left me on the floor. Even if you don't think this is up your alley, you'll probably be surprised to learn that you, too, are an instrumental doom country fan. Talent alone is no guarantee of success, but still, I expect this album will garner the band attention far beyond the hills of Vermont. Here's hoping Wolfhand ride for another 20 years.

The Devil Arrives is available at wolfhandvt.bandcamp.com.