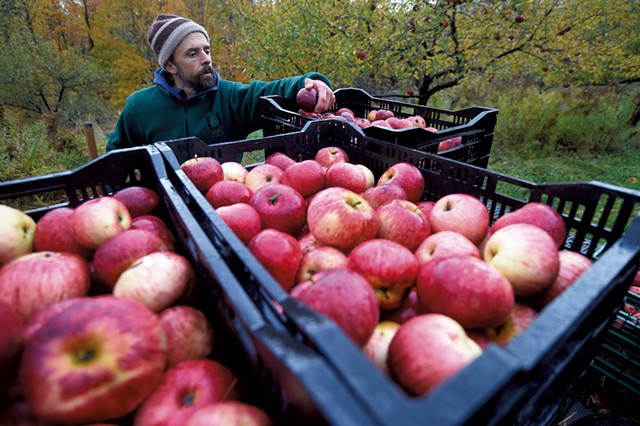 Teddy Weber was riding in a Dodge Sprinter van in Great Britain nine years ago when he and his Wiyos bandmate started talking about apples. The conversation centered on the wild apples that Weber, the group's guitarist, had picked and stored in his kitchen back home in New York's Hudson Valley.

"Why don't you make cider?" suggested Seth Travins, an upright bass player and fermentation specialist whose nickname is Sauerkraut Seth.

So it happened that a conversation between a couple of touring musicians before a gig in the cider-friendly UK propelled Weber to create a fermentation-focused day job of his own. In 2011, he moved to Vermont, where a few years later he founded Tin Hat Cider; it's now located in the cellar of his Roxbury home.

Weber makes cider with apples from an orchard he tends in Waitsfield and wild apples he forages, with permission, on public and private land in the Mad River Valley.

"I pick the apples, and I make the cider," Weber, 43, said on a recent afternoon in his orchard. "I'm 100 percent responsible for whatever I make. I have pride in that, and I think the customers appreciate it." His Farmhouse cider is dry and bubbly, potent and intriguing — at once nuanced and straightforward.

A handful of cider makers in Vermont use wild apples, said Terry Bradshaw, an apple expert and research assistant professor at the University of Vermont's Department of Plant and Soil Science. These include Fable Farm in Barnard and Puckerbrush Cider at Newhall Farm in Reading. The smaller outfits come and go, he said, and some are "sticking around." (Shacksbury produces a special line of ciders, part of its Lost Apple Project, that uses wild apples.)

"Tin Hat is a true small-batch farmhouse cider," Bradshaw said. "It's the apple, and nothing but the apple. Teddy makes a very good representation of that."

Weber moved to Vermont after he and his now-wife, Melissa Marks, visited Montpelier and stumbled upon a sign for a caretaking gig in Roxbury. "That seemed like a spotlight," Weber said. They called the phone number, went to look at the place, got the job and moved to the 300-acre, off-the-grid home.

"The adventure for me is going out and trying to find wild apples." Teddy Weber tweet this

The following year, the couple moved again — this time to a rental property in Fayston. There Weber met Gib and Sue Geiger, beekeepers who live on a farm in Waitsfield. Weber mentioned to the couple that he was thinking of planting an orchard.

"'We've got some apple trees here on the farm,'" Weber recalled Gib telling him, suggesting that Weber could manage the orchard.

Weber had seen some apple trees from the road but learned there were 250 of them on the property. "I was actually ecstatic," he said. "I thought, You've got to be kidding me!"

The Geigers were similarly pleased. "He's cute," Sue said. "He'll bring us a basket of apples when he finds some really good ones."

In 2013, when Weber started working with the trees, Gib showed him a map of the orchard. It's planted in two hillside plots on either side of the 19th-century farmhouse at Mountain Valley Farm. The map indicated that, among numerous varieties planted at the farm in 1993 — including Wolf River, Freedom and Golden Russet — a share of the trees were called Elmore Cider.

This name intrigued Weber. He called Elmore Roots Fruit Tree Nursery, which had planted the orchard, to find out what it meant. He learned that the trees called Elmore Cider were wild-apple seedlings the nursery had planted along with the cultivars.

For an orchardist who uses organic practices and has a particular interest in wild apples, the Waitsfield orchard was ideal. "I thought, I'm the perfect guy to take this up," Weber said. He started pruning.

"It makes it really interesting if you're living there and picking them," Fried said. "The trees are different; there's a lot of flavors. A diverse diet is good. Well, it's the same in apples."

Apples have fascinated Weber since his student days at Unity College in Maine, when he would ride his bicycle on dirt roads and pick up wild apples. He's interested in their genetics, their flavor profile and the centuries-old lore that surrounds the fruit. The name of his cidery, Tin Hat, is a tip of the hat to storied nurseryman Johnny Appleseed, who is said to have worn a tin pot on his head.

Once or twice a week he forages in fields and woods, carrying a backpack, an apple bag, and a pen and paper for taking notes. Weber compares the activity to wine tasting: smelling, biting, spitting out. He's focused on three "pillars" of the fruit: tannin, acidity and sugar.

When he finds a tree with potential, Weber records it in his notes with the shorthand AOI (apple of interest). If the tree is in a stand of many apple trees, he finds a small rock and places it next to the trunk. He uses no GPS technology to track where he is; he simply remembers. Weber will return when the apples are ripe or have fallen to the ground.

"The entire experience is just me and nature, me and the outdoors," he said. "I've always sought that out. Rolling it into my own business is a real treasure and something I have gratitude for."

As a musician who's been "road-dogging it" for many years, he also appreciates operating a local business. At Tin Hat, every aspect of the work — ingredients, production, sales — is close to home.

Yet Weber's interests are intertwined by their aesthetic: The Wiyos opened for Bob Dylan at the Champlain Valley Fairgrounds in 2009, but you can imagine them playing in an apple orchard. His passions are joined, too, by his experience on the road: Playing Americana roots music in Great Britain, the Wiyos were turned on to excellent cider.

The band often stayed in "backwoods kind of places," Weber said, where it was common for locals to ask, "You boys want some cider?" Soon, someone was pouring the drink "from a little hooch factory," Weber recalled.

Now he's got a little hooch factory of his own, and he's still writing and playing music as time allows. Earlier this month, after daytime work in the orchard, Weber went home to practice banjo for a recording session in upstate New York.

Like the roots-based music the Wiyos play, the apples Weber seeks are not easily classified.

Over time he's come to realize that "the real treasure is not in finding the one [apple], it's in the fact that there's a seemingly limitless genetic diversity out there," he said. "It's not in the one; it's in the whole."

The original print version of this article was headlined "Apple Adventure | Guitarist Teddy Weber has another practice: Tin Hat Cider"