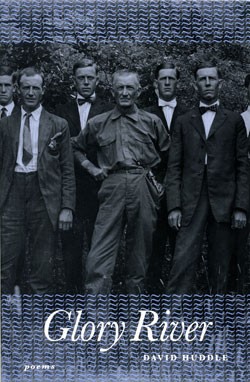 Say there was a list of fictitious literary locales you’d rather read about than visit. David Huddle’s Glory River would definitely be on it. True, it’s not Mordor or Dante’s Inferno — just a godforsaken Appalachian hamlet that makes the creepiest Southern Gothic burgs of Faulkner and Morrison seem livable by comparison.

In the eight “River” poems that open his latest collection, Glory River, the University of Vermont English professor brings to life a landscape harrowed by pollution and permeated by black-comic folklore that’s indistinguishable from true history. There’s the legend of Sarah Jean, a girl who performs a miracle of sorts only to be hounded to her death by her fascinated and frightened peers (“Metamorphosis”). There’s the story of a scientist who comes to study Glory River’s wildlife and barely manages to leave in one piece (“Screech Owl”). There’s a portrait of “The Mayor of Glory River” — a stray dog fabled to bring luck, but also to take it away. There are vignettes of sexual frustration and sexual violence and, in “The Last Time Anything Went,” perhaps the most perverse prayer ever voiced:

I beseech the irascible hegemony

up there behind that Carolina blue

to give us back our own personal bliss-killing

party-pooping life-shredder, the only one

who truly knows how to turn our days

The addressee of this plea isn’t God — who doesn’t seem to exist in Glory River. It’s “Anything,” a personified pronoun who acts like an amorous trickster spirit. The poem’s title plays on the phrase “anything goes,” which Cole Porter famously yoked to the free sexuality of the Jazz Age. But in Glory River, the scary bacchanalian era when “Anything fucked / everything in sight” ends with Anything really going, leaving everyone with one nasty, endless hangover.

Though it’s best not to read too much into this profane, outrageously funny bit of free verse, it’s also hard not to see it as a connection to the poems that make up the more staid second section of Glory River, titled “Mountain Spring.” There Huddle departs his imaginary boonies for traditional lyric territory: poems about aging, mortality and memory, written in a highly personal voice. In “1970,” the poet recalls seeing one of the groundbreaking New York performances of Hair and, though he didn’t know it then, being

right at the focal point at the exact

moment when the nation

made its final turn away from love

and generosity and toward greed,

hatred of the poor, bullying

the rest of the world, and pillaging

In fact, a poem called “The Cosmetic Surgeon Comes to Glory River” tells us how the denizens of the cursed village managed to blend into the broader American gene pool, and what they lost in the process. In this parable of sorts, the surgeon works his way through the town’s citizens till each of them has been prettified, rendered potentially attractive to the normal folk outside, “& eventually Glory River itself suffered / a betterization, our trash was picked up, our cans // and bottles recycled, our muddy paths graveled / into nature trails . . .”

Sound familiar? Huddle has a similarly acid take on the march of civilization in the collection’s final poem, “Water.” Here he contrasts his relative material wealth — “stereos on every floor, a thousand CDs” — to his parents’ more modest expectations. But, while the young poet drank from a cold spring whose taste he still remembers, “At Costco now I buy cases of plastic / pints tightly sheathed in plastic,” he says with palpable scorn. The world has been “betterized,” but at what cost? And can we ever really accomplish what the seekers of surgical rejuvenation and the purchasers of bottled water want — namely, to insulate themselves from death?

No need to answer that one. Mortality and the collective decline and fall of humanity have to be two of the oldest themes in literature, but Huddle’s skill at telling a yarn keeps them from growing tiresome. His poems are almost always narratives — you could rewrite them sans line breaks and get a passable piece of prose — but that doesn’t mean they’re prosaic.

In the “River” poems, Huddle develops a wickedly witty and colorful voice that seems to speak for the town collectively, inventing new words and bizarrely vivid metaphors and similes (“yodeling like Caruso being put to death”). In the personal poems, he uses jarring juxtapositions to keep the reader alert, but also to make one of his pet points, that death is already part of life and vice versa. The aging speaker recalls a majorette he dated in high school; she is “Dead five / years now. Almost unbearably alive.”

What keeps the dead alive is memory, of course. In the last poem in the Glory River series, a “Distinguished Professor of Cultural Studies” recalls the time he spent in the town, researching his dissertation. Like a stand-in for the educated author, he looks back fondly on its ways, foolish and foul as they may have been: “I’m old enough to understand / what a gift it was those years ago when / the people of Glory River took me in.”

In this mischievous and magical poem, the bland affirmation rings a little hollow. But that’s because, as readers, we’ve already experienced Glory River’s brand of hospitality, and we already know it’s a gift — one that leaves us with scatological images and subversive reflections we can’t shake, but a gift nonetheless.

Save your prayers - we Glory River rats

don't need you putting in a good word

for us. God damn right, love is a fucking mess

here in the valley. Theater of the Absurd

beside the road, husbands shot or knifed twice -

parents out looking for more of the same.

You think you've got it better, don't you? Well,

God loves us, too! Above average pain

& mean, but what we've got that you don't is

this fiddle, banjo, & stand-up bass, this

steel guitar - Do you hear that? Blood & dirt,

love come & gone in a truckload of hurt.