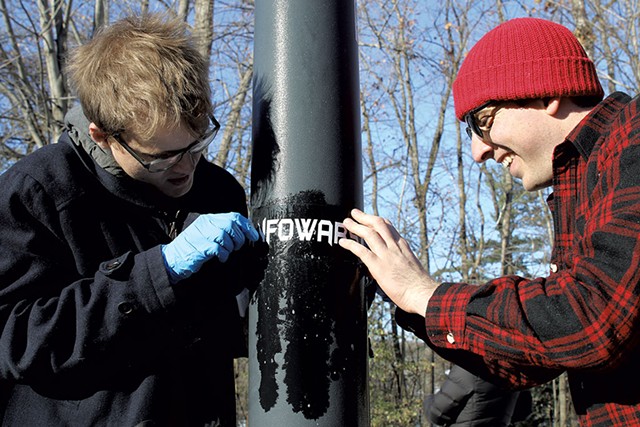 After a morning of searching, Kason Hudman finally found what he was looking for.

Attached to a utility pole beside Burlington's Riverside Avenue was a sticker reading "Infowars.com" in capital letters. Hudman reached into his backpack, pulled out some Windex and a razor, and got to work removing it.

"Let's see what we can do here," he said, attacking one end of the decal while his friend Walter Keady tried to peel up the other with a car key.

It wouldn't budge, so Hudman turned to the last tool in his kit: stickers of his own. "Immigrants Welcome" and "Love Rise Up!" some read. He plastered them on top of the Infowars decal so that it was barely readable.

Hudman and Keady belong to the BTV Clean Up Crew, a handful of young people whose mission is to remove signage that promotes organizations they deem hateful. Far-right "news" outlet Infowars and its founder Alex Jones, for instance, are best known for peddling the conspiracy theory that the 2012 Sandy Hook Elementary School massacre was a hoax. Jones' everyday rhetoric targets immigrants and borders on anti-Semitic.

Generally speaking, Clean Up Crew members focus their hunt on messages left by the Patriot Front, an anti-immigrant, white nationalist organization that regularly posts stickers and flyers around the Burlington area. Police have encouraged residents to report the Patriot Front's activity so officers can track its movements. Hudman and his friends take a different tack: They remove the material vigilante-style and tell their supporters to do the same. The group believes that notifying the police — who may then alert the media — only gives hate groups what they crave most: attention.

"They're looking for public confrontation," Hudman said, so the antidote is to remove the stickers quietly and anonymously.

The Patriot Front is plenty vocal on its own. Formed after 2017's Unite the Right rally in Charlottesville, Va., the group regularly documents its stickering activities on Gab, a social media platform favored by the alt-right. Every day, members post photo collages of the stickers from all over the country. The decals often display patriotic symbols and inflammatory slogans such as "Better Dead Than Red" and "America First." In recent months, stickers have been spotted in Montpelier, Vergennes, Highgate and Winooski.

In March 2018, a handful of masked Patriot Front members gathered in Burlington's City Hall Park, carrying a banner that read "Reclaim America!" and chanting the Nazi slogan "blood and soil." In February 2019, they plastered stickers outside the Ohavi Zedek Synagogue and the Pride Center of Vermont, prompting Burlington police to issue a press release about the "bias-motivated vandalism." Mayor Miro Weinberger called the actions "antithetical to Burlington's ... welcoming, inclusive community." The Burlington City Council passed a resolution condemning the group.

Local anti-fascists welcomed the sentiment, but the public statements "ended up blasting [the Patriot Front] name all over," Keady lamented. "Now it's in the city record."

Hudman recalled thinking that someone should remove the stickers before anyone finds out. And so the covert cleanup campaign was born. Nearly every weekend since mid-August, the group has canvassed Burlington neighborhoods on a search-and-destroy mission. They've kept a custom Google map marking where the "Nasty Sticker Brigade" — the crew's nickname for the Patriot Front — has struck. A copy provided to Seven Days shows more than 60 dots around town, including several by the waterfront, on the Church Street Marketplace and around the UVM campus.

Burlington police are also monitoring the stickers; they get calls about them a few times a month but don't keep a running count, according to Det. Tom Chenette. The department, too, struggles with whether to alert the media or just mark down the incidents, he said.

"This group is just about getting their name out there, getting the publicity and getting more hits on their website," Chenette said. "We're always torn: Do we do the press release and essentially give them the press? Or do we just keep quiet about it?"

More often than not, the police don't alert the media unless the propaganda targets a specific minority group. Putting up the stickers isn't necessarily illegal — or, at least, it's difficult to prove it is, Chenette said. To show there was a crime, police have to calculate the cost of removing the stickers and the damage to the underlying surface. Because many of them peel away with little effort, it's unlikely that they could be considered vandalism, according to Chittenden County State's Attorney Sarah George.

"Whether the message within such stickers is racist or biased does not make a difference when deciding whether it's a crime," George wrote in an email. "Putting stickers up is not a crime, and the messages within them is protected speech under our First Amendment."

Regardless, police can keep the public informed of Patriot Front activities if residents report them: "If we believe that a hate group is operating in Burlington, that is something that is worth noting," Deputy Chief Jon Murad said.

The New York City-based Anti-Defamation League would agree. The watchdog group relies on police and media reports to build an interactive database of white supremacist public messaging. It shows that incidents in Burlington increased from six in 2018 to 17 in 2019; statewide, the number grew from 13 to 72.

"We're really only as good as our data," said Melissa Kraus, the associate regional director for the Anti-Defamation League in New England. "We can only fight anti-Semitism and other forms of hate when we know what's happening."

The upward trend isn't unique to Burlington. Reports nationwide skyrocketed from 426 public sightings of white supremacist material in 2017 to 1,209 in 2018 — an indication that more people have become emboldened to spew racist rhetoric, according to Kraus. It's important to call it out, she said, and "one way to do that is to report it to the police."

"We want to spread the message that we're taking down terrible stickers." Jane Garfinkel tweet this

The Clean Up Crew isn't just removing the stickers. For every sticker it finds, the group asks supporters to pledge a small sum to Ohavi Zedek, Migrant Justice and Black Lives Matter. They've raised more than $700 since September. The crew also picks up litter along the way, earning them honks and waves from passing drivers.

Migrant Justice staffer Will Lambek said the crew has "found a creative and productive way to thread the needle" by raising awareness about hate groups without giving them publicity. He supports their decision not to notify police every time they find a sticker.

Chenette, the Burlington detective, said he understands the rationale behind not calling the cops. But out of the dozens of calls police have received about stickers, only one generated a press release, he said.

"I think it's great that one way or another, these things are being removed," Chenette said. "Hopefully [the Patriot Front] will just lose interest and choose to go back into the depths of the internet."

To inspire his own advocacy, Hudman, the Clean Up Crew organizer, draws on his life motto: "all things in common," a translation of Acts 2:44 in the Bible. He interprets it to mean that all Burlingtonians share responsibility for making the city safe and welcoming.

"Everyone recognizes that litter ... that's everyone's responsibility to pick that up," Hudman said. "Hatred, when that's in your community, it's the same thing."

The original print version of this article was headlined "Unstuck | With Windex and razors, Burlington "vigilantes" target hate-group stickers"