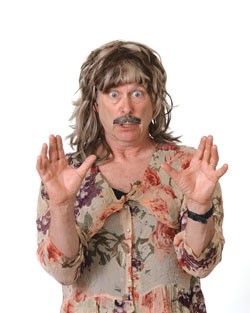 Burlington actor David Schein turns sexual identification and gender relationships on their ear in his one-man show Out Comes Butch, which opened at the Off Center for the Dramatic Arts last weekend. In it, Schein, who comes to Vermont from a long and distinguished career in experimental/progressive/whatever theater, explores nearly all the letters in the acronym LGBTQ. Unfortunately, it would give everything away to explain exactly how he does this, but suffice it to say, it’s a ballsy performance. So to speak.

Perhaps I can say that Schein/Butch begins the evening as a foul-mouthed construction worker in a suitably blue-collar outfit, bad wig and facial hair. Butch imagines himself a sensitive-enough guy, but he’s actually kind of a dick. Even if he does try to take care of a woman and child at home, and claims to do the cooking and cleaning to boot. When the ungrateful spouse up and dumps him, Butch wallows in the hurt, pain and self-pity of the dumpee. And then he gets mad. He acts out at work, making threatening gestures with a power tool. His boss suggests an anger-management class.

Instead, Butch decides to remake his life, to transform from “an asshole carpenter” to … something else. He meditates. He trades in his Ford F-100 truck for a Karmann Ghia. He loses the beard and “all this sheetrock shit” and gets a job at a record store. And he chooses a totem — which he carefully pronounces “toe-tem.” It is a pink flamingo.

That supplies a rather bald clue to the next persona Butch tries on. Or should we say tries “out”?

Schein is an intense performer, throwing himself full-bore into the multiple roles he has created in this piece. At times he is very funny, particularly in body language; at other times he’s almost uncomfortably confrontational. He begins Butch as a dude chafing against the constraints of dudeness and the unfathomable female, but the character Schein has created is open to anything, almost too eager to change and learn and grow. Yet all the while, he’s not just trying to find himself; he’s trying to find love.

Schein brings his persona almost full circle to end up much as he began, with one really big difference that I won’t reveal here. That conclusion could be interpreted in at least two ways: The cynical reading is that you can’t escape who you are; if you’re a loser now, you’ll always be one, no matter how many identities you try. The gentler interpretation might be that finding love — or yourself — should not require sacrificing who you are.

Schein is a man of many skills: He writes, composes, performs and teaches. The freeform “résumé” on his website also lists managing nonprofits, fundraising for youth, strategic branding, oral history projects and more. He cofounded the One Love AIDS/HIV Awareness Theater in Awassa, Ethiopia. He’s created six solo shows, along with numerous plays and musicals. In his former stomping grounds of San Francisco, his 70-person opera Tokens, a Play on the Plague earned him three San Francisco Bay Area Theatre Critics Circle Awards, as well as three Hollywood Drama-Logue awards. Out Comes Butch, Schein explains, began as an improvisation he performed in Berkeley for a series called “Improvisation and the State of the Heart.”

Butch has been performed by other theater groups around the country, including a recent stint at the Voodoo Lounge in New Orleans. Schein himself toured the work in the U.S. and Europe with Whoopi Goldberg as a companion piece to her stage production “The Spook Show” in the early 1980s.

In short, Schein has been an uncommonly productive self-employed artist. He sums up his work as “using the arts as a tool for transformation.” Schein certainly plays with that theme in Out Comes Butch. But the piece with which he pairs it at the Off Center, playwright Jim Nisbet’s “Note From Earth,” strikes a much darker note.

Schein presents that 15-minute work — also a solo performance — following Butch and an intermission. He first performed it in 1985, directed by the author, in San Francisco, and has directed it himself elsewhere. “Note From Earth” is a sort of long poem, like a Shakespearean soliloquy, and Schein delivers it with a dramatic combination of moodiness, anger and resignation to unhappy destiny. It’s one thing to read the piece — as you can at thebigclickmag.com — but listening to it is challenging. Or, more to the point, hard to follow.

“Note From Earth” is set in a postapocalyptic time. Earth is apparently totally trashed — Nisbet calls it “the wreckage of the twentieth century” — though whether by some cataclysm (burning and radioactivity are themes) or by a slower degradation (climate change?) isn’t specified. Martin Gil’s spare set, essentially an artful installation of debris in the center of the room and strings of little white lights overhead, underscores the grim reality of the ruined, darkened planet. Schein’s delivery is not stentorian but kinetic: He scrabbles around the room (configured as theater-in-the-round) like a trapped animal, even flinging himself on the rubble pile, and talks nonstop.

While a listener may not be entirely certain what’s happened to Earth, or is happening in the moment with this character — he calls himself “the wilted swain beyond its end” — Nisbet’s poetry is mesmerizing. And Schein’s performance is an urgent, desperate force to the very bitter end.

"Out Comes Butch," written and performed by David Schein, and “Note From Earth,” written by Jim Nisbet and performed by Schein, Friday and Saturday, May 31 and June 1, 8 p.m., at the Off Center for the Dramatic Arts, Burlington. $12. Mature audiences only. Info and reservations, offcentervt.com