With Stowe's Tres Amigos, Local Restaurateurs Make It a Trio 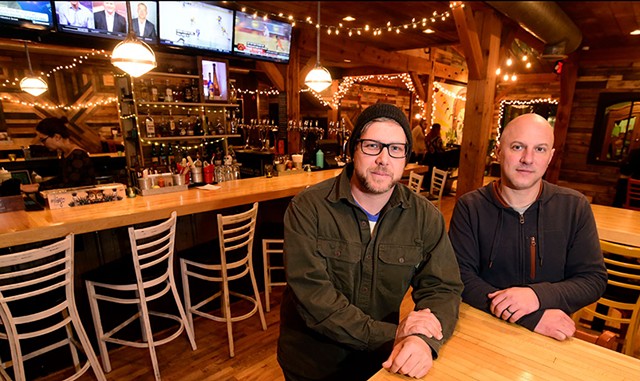 A few days before Christmas, a friend and I kicked off the holiday season in festive fashion at Tres Amigos, a Mexican restaurant that opened last September on Mountain Road in Stowe. We drank $6 house margaritas and ate a selection of appetizers that left us too full for a main course, though I eyed my bar neighbor's roast chicken longingly. We snuck a peek at the connected music club — that new-look Rusty Nail, now known as Rusty Nail Stage. Though dark that night, it still evoked memories of long-ago shows.

But it was the current vibe that held sway: fast and friendly service, hearty and flavorful food at an affordable price, and a bar crowd in a chitchatty mood.

Two patrons started talking to us just for the fun of it. One, a 26-year-old skier from Florida, regaled us with his cinematic life story and strongly held view on nachos (every chip should hold every ingredient, he insisted). We also met Sally Hynes, 70, of Stowe, who was enjoying the new neighborhood restaurant with her husband and grandson.

Fast-forward two weeks, to the end of the winter holiday, when I sat at a different bar — the Reservoir in Waterbury — for a meal and a beer. The bartender greeted regulars with hopes for a happy New Year. A string of lights glittering above the bar and a slight warming — it was 17 degrees that night — kept the holiday spirit alive three days into 2018. The place was humming at 6:30 p.m., packed by 7.

I tried an appetizer I'd never heard of, roasted buffalo cauliflower, and became an instant fan. My kid-size cheeseburger came with a grown-up-size kale Caesar on the side. 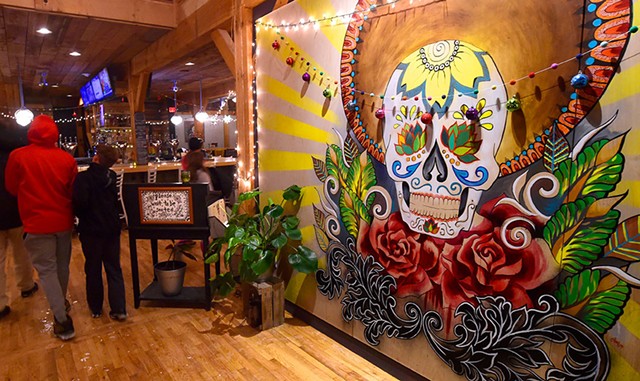 My server was observing the cheerful activity from behind the bar. "I keep getting a whiff of something, and it smells so good," she told me. "I think it's your Caesar salad. I want one now."

I stopped eating long enough to reply, "I recommend it."

The restaurants that bookended my holiday were two of three owned by business partners and Waterbury residents Mark Frier and Chad Fry. Their trio of eateries is rounded out by the Bench, which is located, like Tres Amigos, on Mountain Road in Stowe.

All three restaurants showcase Vermont beers — a business model that was far less common when Frier, then working on his own, opened the Reservoir in 2009. "Chad came on a year later," Frier, 37, said, "when I realized I didn't know what I was doing."

Frier had moved to Waterbury from Chicago in 2006 for a job as an engineer at Burton Snowboards in Burlington. He focused on "wearable electronics," products like heated jackets with a control panel in the arm for taking phone calls. "It was interesting," Frier said, "to say the least."

In the summer of 2007, while attending the Vermont Brewers Festival at Burlington's Waterfront Park, Frier had a thought: Why isn't there a restaurant that does what the brew fest is doing? — that is, bring an array of Vermont-made beers to a single venue. "It was such a scene," Frier said, "and there was not one restaurant that seemed to have a lot of the breweries' [products] in one place." 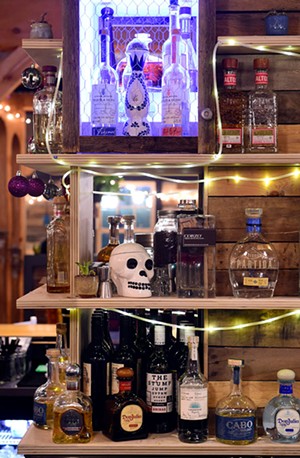 He quit his job at Burton in fall 2008 and opened the Reservoir in April 2009 in the former Waterbury Wings building on Main Street. The restaurant boasts 40 tap lines, about three-quarters of which are dedicated to Vermont beers.

"Even Church Street isn't as exciting to me as what's happening in Waterbury," said Frier, who serves on the town's selectboard.

With no experience running a restaurant, he ran out of money almost immediately, Frier said. He had to learn about restaurant cash flow and how to get profitability out of the kitchen. But, with his engineering background, he had "math on his side."

Frier decided to hire someone with experience in restaurant management and the expertise to help him design a locally focused menu "that didn't make you close the doors." He learned about Fry, then a manager at Rí Rá Irish Pub in Burlington, from one of his servers.

By sheer coincidence, in winter 2010, before the two could formally meet for an interview, they ran into each other on the Stowe Mountain Resort gondola. They started talking and realized they had upcoming plans to discuss working together.

"I had one foot out the door of Vermont," said Fry, who was ready to leave for Portland, Ore. He decided to stay on to manage the Reservoir with the understanding that, if things worked out, he and Frier would become business partners.

Fry, now 41, graduated from Kent State University in Ohio with a degree in business management. His experience includes property management at Bolton Valley Ski Area and serving as regional director of operations for Hyatt Hotels from his base in Savannah, Ga.

"I was able to get my arms around the operational ends of the business," Fry said of managing the Reservoir. "It was a lot of work at first, but it was a smaller project in scope.

"Very early on," Fry continued, "after I felt like we had a handle on this, we started looking around for other opportunities."

The men now own three restaurants, each of which seats 110 to 120 people. They have 150 employees, including chef Paul Moran, 54, who has cooked in Vermont restaurants for about 30 years. He started with the pair at the Reservoir and has stayed on to open both the Bench and Tres Amigos, where he runs the kitchen.

The restaurants source most of their protein locally, Fry said, including ground beef from Shelburne-based LaPlatte River Angus Farm. In season, they use local produce as much as possible while trying to maintain an affordable price point. 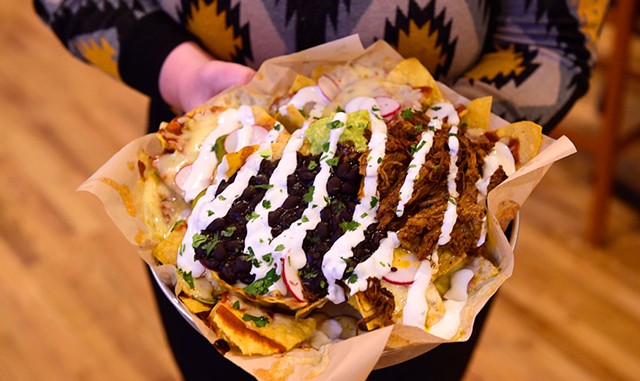 For Tres Amigos, the partners wanted to create a menu that wouldn't compete with the nearby Bench, Frier said. "We are making a decision on what people are going to eat before they walk in the door." The core Mexican menu is augmented by an array of entrées that includes chicken, steak and seafood dinners ($12 to $20).

"I think we've got a good read on the public around here," said chef Moran. "We kind of have our stamp, and we try to stay in those lanes and be fair to everybody."

When my friend and I ate at Tres Amigos, we shared three appetizers, including a delicious tuna tostado, and three drinks for $57 (not including tax and tip). The apps — ample in size and satisfying in taste — were $10 apiece. The priciest thing we had, recommended by the bartender, was a terrific margarita called Motorcycle Diaries made with blood orange, chiles and cilantro. (The price has dropped from $13 to $12 since our visit.) It had a double kick — the spice and the booze.

In creating the Mexican restaurant, Fry and Frier took ownership of a legendary Stowe business: the Rusty Nail. Opened as a rock 'n' roll club in 1969, the music venue has brought to town performers such as Lynyrd Skynyrd, the Marshall Tucker Band and Tito Jackson of the Jackson Five.

Bobby Roberts, who owned the Rusty Nail for about 20 years, is also the Stowe real estate agent who helped Fry and Frier purchase the building and the business. "I love those guys," Roberts said. "You know why I love them? Because when they bought it, these guys called me every day and asked the question, 'Hey, Bobby, what do you think about this?' 'What do you think about that?' They were sort of paying homage to the guys who came before."

Hynes, my fellow Tres Amigos diner, is a native of Barre and has been going to Stowe since she was a teenager. A Stowe homeowner since 1985, she remembers the original Rusty Nail and praised the building's renovation and reincarnation.

On January 4, when weather conditions made travel treacherous in Stowe, Hynes and her husband, John, celebrated their 49th wedding anniversary at Tres Amigos. "It was not a smart thing to be out," she said. "But we had a wonderful time."

The original print version of this article was headlined "Tres Restaurantes"