With Purchase of SunCommon, iSun Eyes Wider Horizons in the Solar Industry 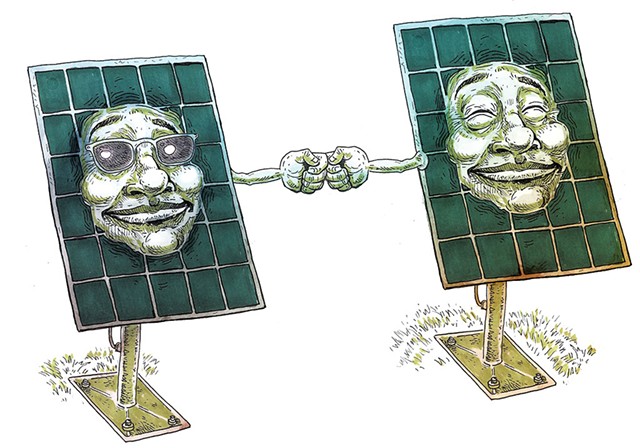 A decade ago, SunCommon was just learning how to be a company. It had spun off from nonprofit political advocacy org Vermont Public Interest Research Group, and its employees were going house to house, community organizer-style, to persuade Vermonters to put solar panels on their roofs.

Their unusual marketing tactics worked, but then SunCommon had to deliver and install those rooftop photovoltaic cells. SunCommon found a partner in the Peck Company, an established Vermont electrical contractor that was looking for a way into the burgeoning renewables market.

The partnership was successful but short-lived; SunCommon quickly grew into the largest residential solar provider in Vermont and created its own team of installers. Peck, meanwhile, found other ways to continue tapping into solar, eventually going public on the NASDAQ stock exchange and, earlier this year, buying another Vermont solar provider, iSun, and adopting its name.

Now the companies have reunited, joining forces to become a big regional player just as the industry appears poised to take off.

"It's been a long time coming, but we think clean energy's time has arrived." Duane Peterson tweet this

Last week, iSun, based in Williston, acquired the Waterbury-based SunCommon for $40 million in cash and stock. The combined company has a foothold in every level of the solar industry, from car-charging stations to rooftop projects to industrial-scale arrays — and ambitions to grow throughout the East Coast.

"We want to expand the adoption and accelerate the adoption of renewable energy," iSun's chair and CEO, Jeffrey Peck, said in an interview. "And we think the best way to do that is to take what we've done here in Vermont, and what we've learned, and really export that to other areas."

The deal was announced just as President Joe Biden's administration unveiled an ambitious plan to draw nearly half the nation's electrical power from the sun by 2050 — a tenfold increase from the 4 percent currently generated by solar power. Such a revolution would require an enormous public investment that is far from certain to materialize. But the goal signals renewed federal support for what has remained a niche sector.

"It's been a long time coming, but we think clean energy's time has arrived," said SunCommon copresident Duane Peterson.

The new, combined solar pacesetter will have 350 employees, the majority of them in Vermont. SunCommon will become a division within iSun, with its brand, headquarters and staff intact, company leaders said. It will serve as the foundation for iSun's foray into the residential solar market. iSun's stock (NASDAQ: ISUN) had been declining for most of 2021 but saw a bump last week upon news of the acquisition.

The purchase continues the Peck Company's pivot to renewables that began following the Great Recession. Jeffrey Peck's father founded the local electrical contracting firm as Peck Electric in 1972. Peck's mother then ran it for years before Jeffrey purchased the company in the late 1990s.

With a history of tackling emerging and sophisticated projects, such as fiber optics and semiconductor fabs, the Peck Company found success in large-scale solar installations and looked for ways to grow.

Jeffrey Peck took the business public in 2019 through a special-purpose acquisition company, an investment vehicle designed to fast-track an initial public offering that has become increasingly popular since. In January of this year, the company purchased iSun Energy, which creates solar canopies to charge electric vehicles, and took on the iSun name.

Peck believes that the coming surge of electric vehicles will lead to increased consumer interest in solar power.

"As EV drivers make those purchases and really find the experience joyful," Peck said, "they're going to be naturally curious about what they're plugging into. Am I plugging into a coal plant? Where do I get my energy from? Where is it sourced?"

In SunCommon, Peck saw an ideal partner to help iSun reach that nascent customer base.

VPIRG, in quite an unusual manner, served to incubate the program that would become SunCommon and helped lobby for regulatory conditions more favorable to its business. VPIRG's energy lobbyist, James Moore, and board president Peterson left the advocacy organization to launch SunCommon in 2012.

SunCommon has been able to grow by placing a high emphasis on customer service that reflects its VPIRG roots in community organizing, Moore told iSun investors during a conference call last week. He compared the solar installation business to trades such as plumbing, where word of mouth is powerful, affordable marketing. SunCommon has installed solar panels for more than 7,000 homeowners, and nearly a third of its new projects come from customer referrals.

The company expanded into New York State several years ago, including through the acquisition of Hudson Solar in 2018.

SunCommon has pursued out-of-state markets since the cost of doing solar projects in Vermont spiked in recent years, Seven Days reported in 2020.

Vermont was an early leader in the field; the Solar Foundation says that about 14 percent of the state's electricity comes from solar. But the number of solar industry jobs in the state dropped between 2015 and 2020, down to just over 1,000 from a peak of more than 1,750, according to the foundation. That was among the steepest contractions in the country.

"I've heard from a couple renewable developers that because Vermont's regulatory environment has become so harsh, they're turning attention to other states as far away as Virginia," said Peter Sterling, interim executive director of Renewable Energy Vermont, an industry trade group.

But iSun's plan to expand throughout the Northeast isn't a reaction to Vermont's comparatively dim solar marketplace, Peck said.

"We are reacting to the climate crisis and trying to find business solutions that will really help facilitate and accelerate the adoption of solar power," he said.

SunCommon and iSun's executives see an advantage in creating economies of scale in an industry that is largely fragmented. There are some large national players, such as Sunrun and Tesla, but the vast majority of firms have annual revenues below $5 million, Peck said. SunCommon and iSun generated a combined $51.4 million net revenue in 2020, the companies said.

SunCommon had adopted "purpose beyond profit" as something of a tagline but always had ambitions to grow. Still, Peterson acknowledged that he hadn't imagined his company would one day join a publicly traded company — one of only a handful based in Vermont. But the former "chief of stuff" at Ben & Jerry's doesn't see any trouble maintaining SunCommon's values within its iSun parent company; Peck has asked SunCommon's leaders for advice on getting iSun certified as a B Corporation.

Peck wouldn't say where exactly iSun plans to grow next, but he said Vermont will remain the company's home base.

"To have two solar companies join forces to find business solutions for the climate crisis and expand their influence elsewhere," he said, "I think it's tremendous for the state of Vermont and everybody involved."

The original print version of this article was headlined "Solar Powers | With purchase of SunCommon, Williston's iSun eyes wider horizons in the solar industry"