With Photographer Judd Lamphere, Old Dogs Get Their Day ... in the Studio

They say you can’t teach an old dog new tricks. But don’t tell that to Judd Lamphere. Or to the pups that pose for him. The Burlington photographer’s spacious, brick-walled Reciprocity Studio on College Street has lately been hosting panting canines that seem eager to shine in front of his camera. Up two flights of steep stairs, Lamphere is working on a project to document the faithful love of aging furry friends. “This is a way to honor that,” he says.

“This” is his Old Dogs series — close-up portraits of beloved pets in their graying last years, shot against an inky black background. The pictures are sometimes whimsical; all are poignant.

Lamphere, 32, has eight of these pictures so far on his website, along with the travel, commercial and human portraiture on which he spends most of his time. While the Old Dogs project is near to Lamphere’s heart, he mostly works on editorial photography for a variety of organizations, including a recent gig for Greenpeace documenting the July train derailment in Canada.

Lamphere says that Roxanne, a friend’s “crook-y-eared dog” he had known all her life, initially inspired him. As she aged, white hair appeared in Roxanne’s jet-black fur, giving her what Lamphere thought was a regal look. He took a few shots and created his first print of an old dog.

Encouraged by this portrait, Lamphere then shot Mr. P, a pug belonging to his studio mate, Matt Day. In the picture, Mr. P’s pink tongue lolls out the side of his mouth, which seems to be grinning. And so the Old Dogs project was born.

Lamphere, who grew up in Underhill, says he had many dogs in his youth, and witnessed their “grace and stateliness” as they aged. Although he hasn’t owned a dog since just before college, he gets plenty of time to play with friends’ dogs — and to watch them grow old.

The project, so far, has relied mostly on word of mouth, and Lamphere has been providing two digital prints to each owner who participates.

“The primary focus of the project is to create a stately portrait of every dog, one that represents their character, personality, love and grace,” Lamphere says.

Ultimately, he’d like to accumulate enough portraits to create and publish a coffee-table book and donate most of the proceeds from sales to local shelters. Lamphere notes that people usually adopt puppies, shelters tend to have lots of old dogs. His dream, he says, would be to see retirement homes for old dogs.

In the meantime, Lamphere is shooting dogs in his studio as people seek him out — a couple of times a month at this point.

His images capture each dog’s unique character, which “could be anything, and I won’t discover it until I start working with him or her,” he says. In some cases there is something unusual about the animal’s tail, or a patch of fur, or a fogged eye. Sometimes it’s a distinctive personality or behavior. Such was the case with Dinga, an 11-year-old Staffordshire terrier. “Whenever she hears a harmonica, she puffs her cheeks out like she’s trying to sing,” Lamphere says.

He places the dogs against a plain black background because he wants them “to stand out and really show their age and the contrast with the white hairs growing in,” Lamphere explains. And he doesn’t make the doggies sit: In most pictures, their heads loom close to the camera or look straight up; in some, there is just a tail or a wispy gray muzzle. Lamphere’s digital portraits are impeccably detailed, right down to the saliva on the dogs’ tongues. The images seem so real, in fact, a viewer is tempted to reach out and pet them. 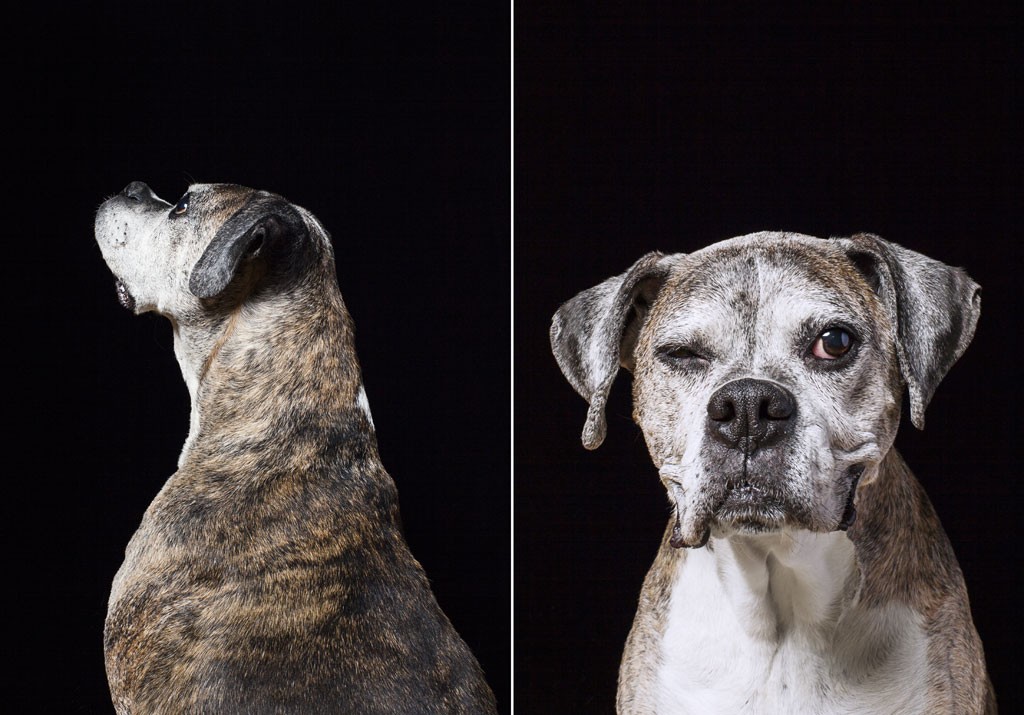 Lamphere says he tries to make a connection with each dog, shooting at its eye level, often sprawled on the floor. These pictures suggest he’s successful. In photos of Molly, a 12-year-old golden Lab, she appears to smile, then yawns widely. Her sparkling eyes reveal that she’s enjoying the attention.

This is apparent even with dogs you’d assume might be fearful or skittish. Miller, a 10-year-old Beagle mix, was 7 when propane tanks behind his house exploded and burned down a shed. As a result, Lamphere says, the dog has a phobia of lights and fire — not ideal for a photographer snapping pictures with a flash. But Lamphere managed to photograph Miller and even convey his shy personality; in one of his portraits, the animal is partially turned away and looking back over his shoulder.

So far, Lamphere has photographed 12 dogs; three of them died shortly after their studio session, leaving behind these images as testaments to their lives. (This writer’s dog, Oly, was one of them.) The oldest dog he has shot was 16, the youngest, 12. Lifespan, after all, “depends on the breed, because all dogs age differently,” Lamphere says.

Each portrait is truly different, because, quite simply, each dog is unique. “It really depends on their mood, character and energy level,” Lamphere says of his subjects. “Some dogs are very calm and good listeners, so I tend to take more shots with them and experiment with different angles and lenses. Others can be very tired, so I try to just get one stately portrait and detail of them.”

Lamphere has shot the majority of his portraits at Reciprocity, but as those steep stairs are too difficult for some dogs to climb, he’s also made a few house calls. And, Lamphere says, he wants to schedule a shoot — possibly at a shelter — where people can bring their dogs to be photographed in an off-site studio.

“The more people I can schedule, the better,” he says, referring to his book goal. Lamphere is likely to get there; after all, every puppy will someday be an old dog.

For more info about the Old Dog project, visit juddlamphere.com.

The original print version of this article was headlined "Pooch Pics." 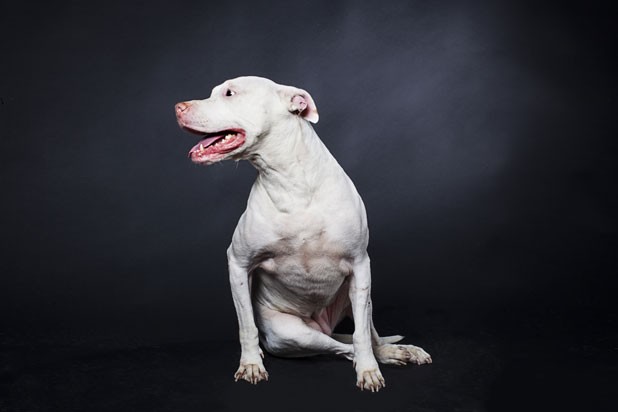 All photos courtesy of Judd Lamphere.